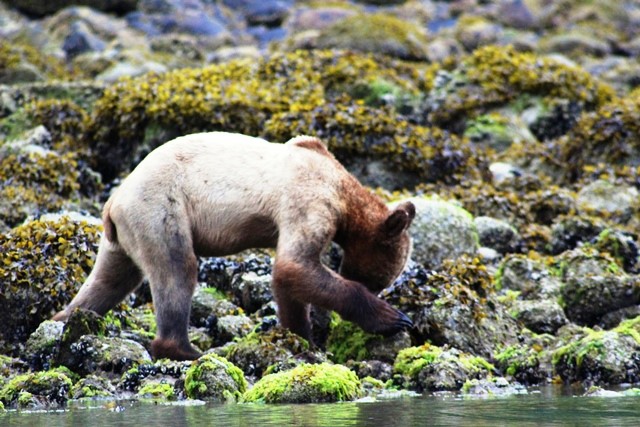 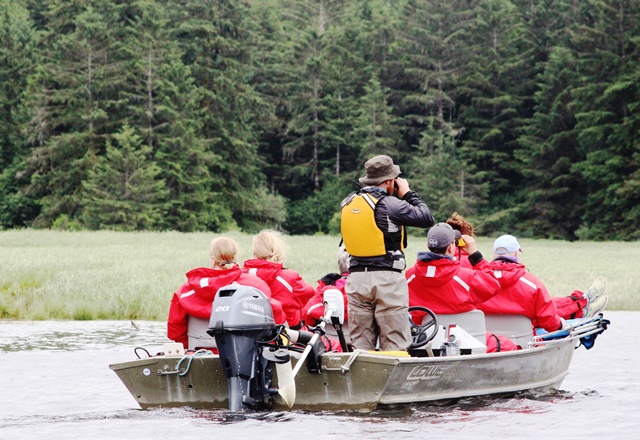 “Do you have any food on you? Chocolate, chewing gum, sweets? Please make sure you don’t have anything edible; bears have a very strong sense of smell.” We looked at each other in slight trepidation and patted our pockets to make sure we weren’t carrying something that might attract a hungry bear. The canopied, flat-bottomed boat inched slowly away from Knight Inlet Lodge and out across the narrow inlet. The guide scanned the opposite shoreline. Suddenly he whispered, “There’s one over there to our left. I’m going to take the boat a bit nearer. Keep very quiet and try not to make any sudden moves.” He then silently slipped over the back of the boat and gently pushed it closer to land. With mounting excitement, we peered along the shore, unable to distinguish between moss-covered rocks and what might be a bear. Then we saw it against the fir trees … 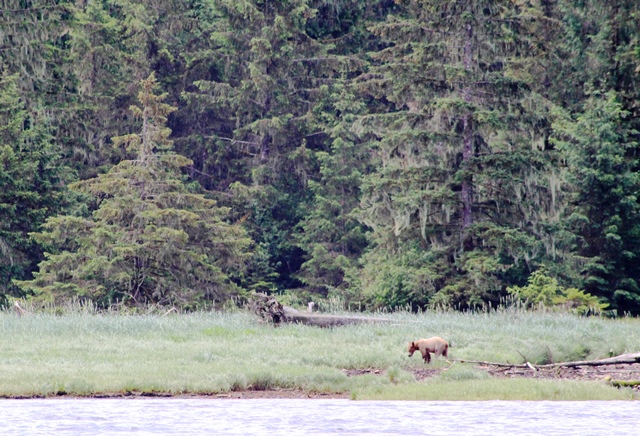 … a young male, maybe 3 years old, quite thin, with capucchino-coloured fur, making his way slowly through the sedge, seemingly unbothered by the boat only 50 metres away. He looked up as we started taking photos but was clearly used to curious humans and carried on eating. With a big furry paw, he turned over a heavy rock covered in moss and seaweed, searching for tasty morsels hidden underneath. 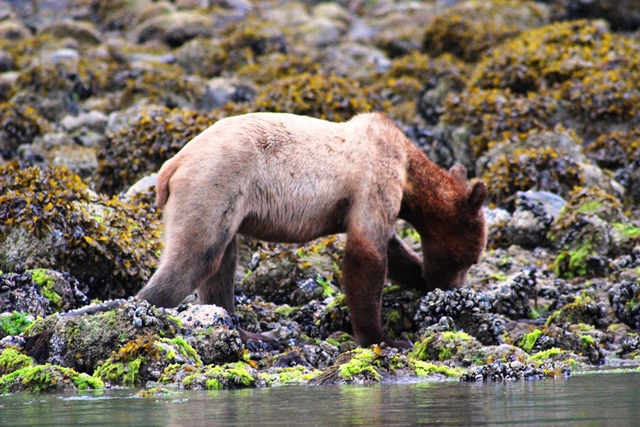 Crunch-crunch went his strong jaws as he munched on fresh mussels.  Water slooped against the side of the boat and the occasional cry of duck echoed through the valley, but otherwise the only sounds were the bear eating and shutters clicking as we tried to capture this moving sight.

Half an hour passed by quickly; it was almost hypnotic to watch this totally wild animal in its natural habitat going about its vital task of building up body mass after its winter hibernation, totally unbothered by the nearby watchers. His powerful shoulders rippled everytime he moved a stone or stood up on a log to get a good look around. Round ears twitched at any noise and his shiny black nose sniffed the air regularly but he was clearly unafraid. It was such a treat to be so close to one of this planet’s mightiest animals. Eventually the guide pushed our boat away, got back in and we went further round the cove to see if any other bears were about. They weren’t, but for a first day this sighting was more than enough. 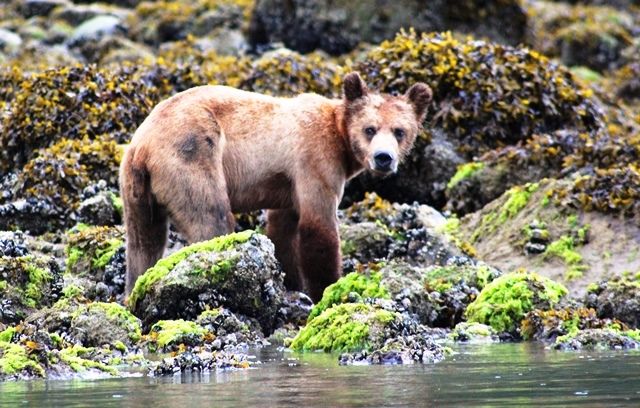 My bear watching adventure had started earlier that morning in Campbell River, a small town on Victoria Island in British Columbia. We had left from a tiny airport aboard a seaplane, or ‘floatplane; as they are called in Canada. It set off at a sedate pace, sailing past shiny yachts and old boats, scattering swans with gay abandon. Trundling along the water, the plane had slowly gathered speed until it inched its way up into the sky. It soared above tree-clad mountains, over finger-like fjords and sun-reflected water, its engine rumbling loudly. The mountains got higher and a narrow river snaked its way though a grassy meadow.

Our destination appeared below; a collection of blue-roofed buildings perched on the edge of dark green water. The little plane circled slowly down and came to a gentle landing on the calm water. 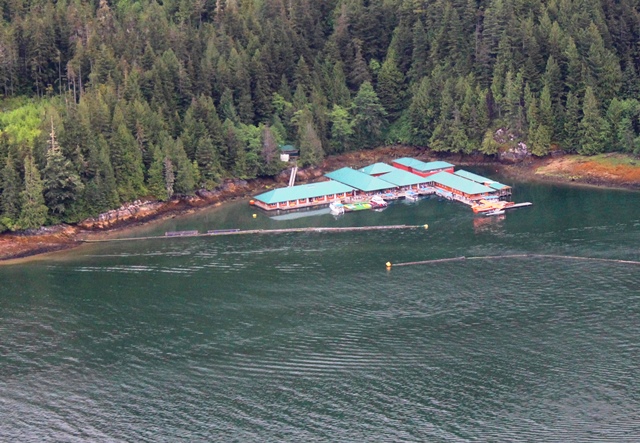 Knight Inlet from the flight plane

We had arrived at Knight Inlet Bear Lodge, our floating home for the next three days. 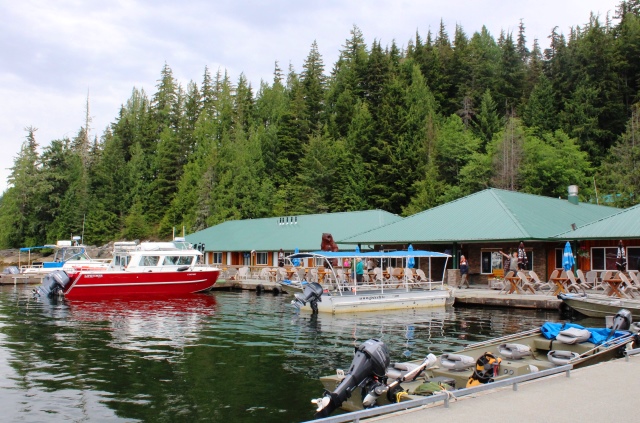 Eager hands helped us off the plane and the Lodge Manager Brian Collen explained how the timetable worked. We had to make careful note of a giant whiteboard which showed what activities we would take part in and with whom we’d be adventuring. After off-loading luggage in my cosy wooden cabin, we were shown the Changing Room with its vast array of bright red waterproof suits, wellies, binoculars and other equipment vital for an intrepid bear watcher. We had great fun helping each other into our Michelin-man suits, taking photos to capture our sartorial elegance. 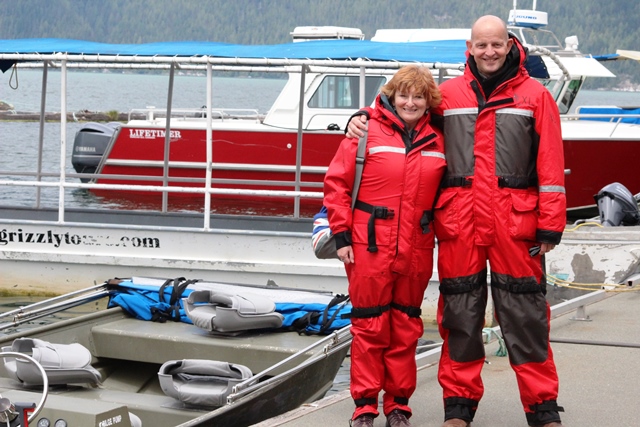 Gary Bembridge and me in our waterproofs

Our first activity was a scenic cruise in a high-speed boat ride from Glendale Cove out into Knight Inlet. Waterfalls thundered down craggy rocks, bald eagles kept watch from enormous nests, ancient glaciers loomed above deep turquoise waters. A lone whale came close and was gone in the blink of an eye. Myriad ducks dipped and dove in the wake of the boat and the sun glimmered through steely clouds, sending flashes of brilliance all around. So many shades of green and silver … 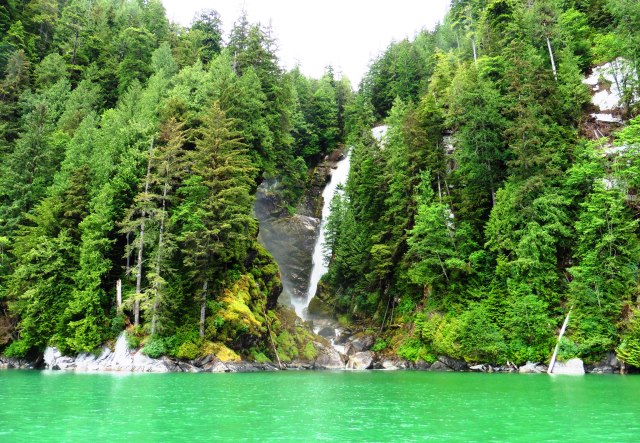 Back at Knight Inlet Lodge, we sat down to a much-needed lunch from the buffet selection of fresh seafood, pasta, salads, fruit, chocolate desserts and a whole lot more. And then the moment I had been looking forward to so very, very much; my first grizzly bear watching boat trip. Donning different waterproofs we had boarded the little boat and sailed to the opposite side of Glendale Cove.

Knight Inlet Lodge, set amidst the Great Bear Rainforest, is surrounded by one of the biggest concentrations of grizzly bears in Canada. In the spring, when I visited, the grizzlies, along with some black bears, come out of hibernation and the females bring their cubs down the Glendale River. Here the bears, lean from months without eating, feed on the nutrient-rich sedge, grasses and crustaceans along the shoreline. 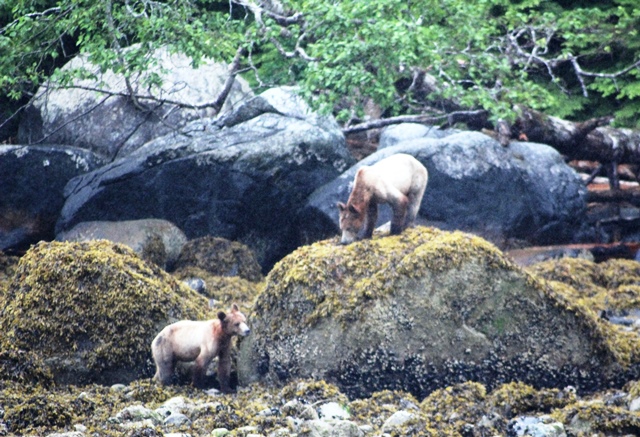 From August onwards, many bears come to the Glendale river to feast on the salmon that spawn near the Lodge. But we were here on a Spring Watch visit, where, ‘ … you get remarkably close to some of these wonderful animals. Seeing them at eye level without disturbing them is a powerful experience. The spring season offers some of the year’s best photographic opportunities, with the grizzly bears moving about in a lush green environment with spectacular backdrops.’ Knight Inlet Bear Tours 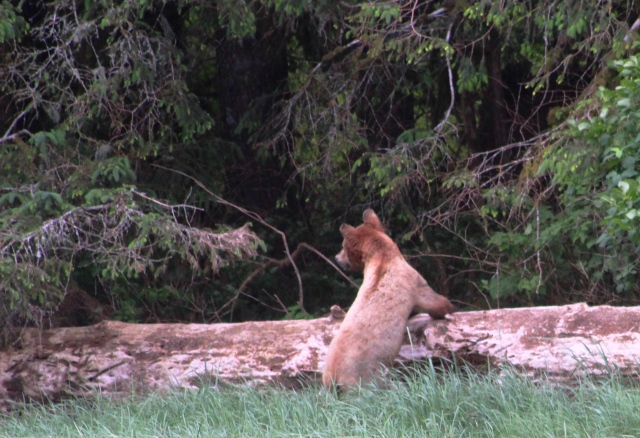 After that first successful bear watching excursion, we enjoyed a delicious dinner. The food is excellent here; guests from around North America, Europe and especially the UK praise it highly. That evening we had a fascinating talk on the sex life of bears from one of the resident guides. Apparently female brown bears only come into season every  2-3 years; they don’t mate whilst their cubs are still with them, which can sometimes be for over 2 years. A long wait for the males, who may try to kill the cubs to get at the female. This is why the female bears around Knight Inlet are content to be nearer humans as they provide a shield for their young cubs from the predatory males. 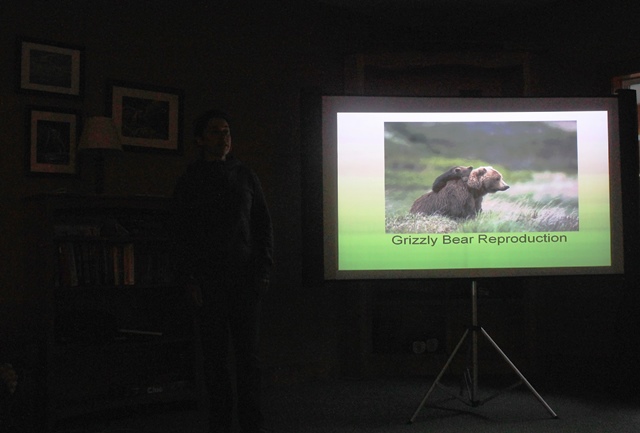 Over the next couple of days we went bear watching many times, in the early morning, the best time to see the bears, and later in the day. We saw at least 10 different bears including females and their cubs, a huge grizzly male standing up on its hind legs and a big black bear just feet from the Lodge. We had a close encounter with a pod of dolphins playing around our boat as they took a little detour on their way out to sea. 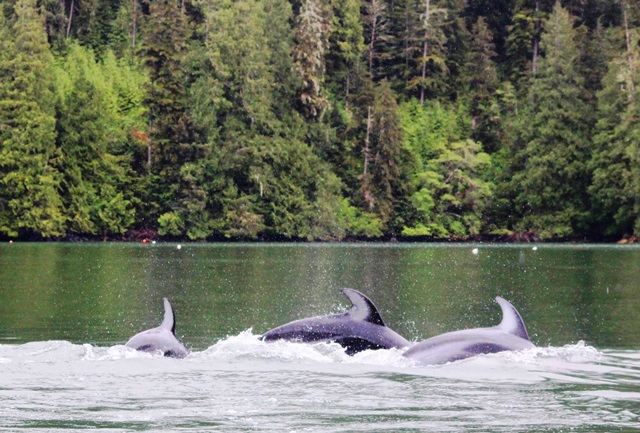 Pretty little hummingbirds flittered and whirred around sugar feeders on the Lodge jetty and swallows swooped over the water at the sun set. Curious seals and sea lions popped up to see what was going on. We watched as one of the guides pulled up a haul of crabs to be served up for dinner. We occasionally saw the two cubs who starred in ‘DisneyNature’s Bears’ movie; they are now 3 years old and foraging on their own.

By the time our flight plane arrived to take us back to civilisation, I really didn’t want to leave. I’d experienced something very special. Getting up close with the grizzly bears in the wilderness has left a lasting impression. Learning more about these much-misunderstood creatures from people who are passionate about their well-being and doing everything about their conservation was a valuable life-lesson. However, it’s the sound of a grizzly bear munching on fresh mussels that stays with me as a reminder of those precious few days in the Great Bear Rainforest … 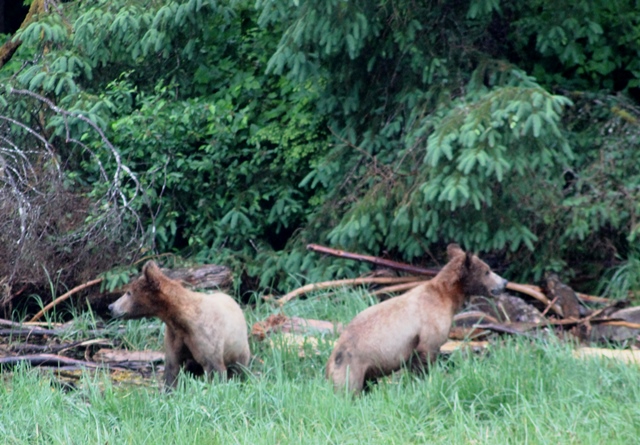 ‘In 2005, Knight Inlet Lodge, in partnership with Dr. Owen Nevin and the University of Central Lancashire in the UK, began a long term population study of the grizzly bears of Knight Inlet. We have successfully satellite collared a number of bears, allowing us the ability to track denning and range characteristics on their sub-population. We have gathered data that will help policy makers in making sound land-use and wildlife management planning decisions for the region that take into account the importance of the grizzly bear to the area. We are working unequivocally to ban the currently legal trophy hunting of grizzly bears in British Columbia. In the meantime, we have adopted innovative strategies of working with the hunting community to restrict trophy hunting in critical grizzly bear viewing habitat in coastal British Columbia. 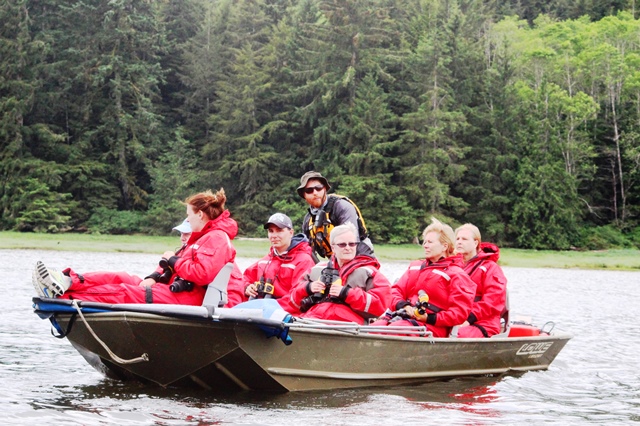 More information about bear watching tours to Knight Inlet Lodge here. Many thanks to all the guides and staff for an exceptionally wonderful stay and also to Explore Canada for hosting our visit to British Columbia. 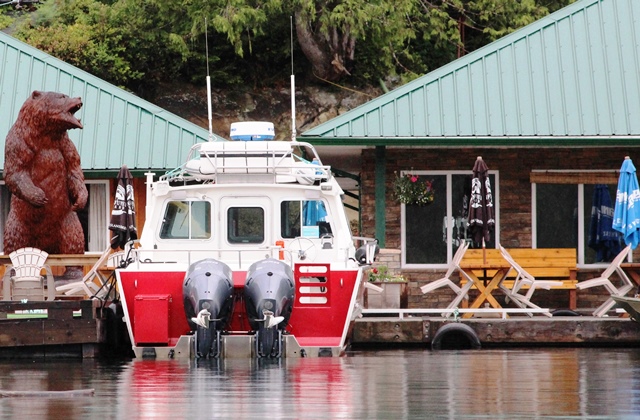 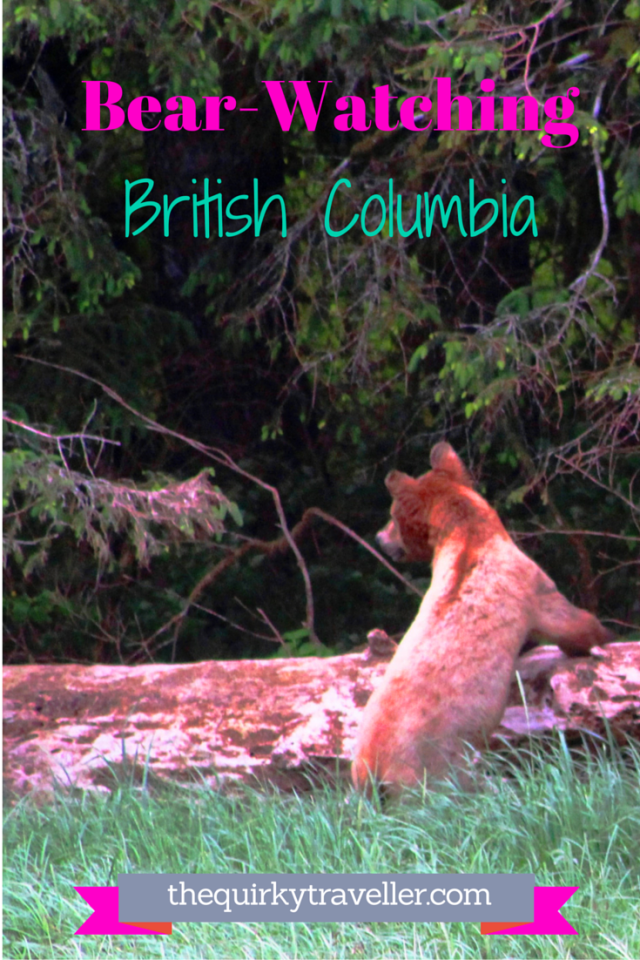 « Previous post
Leaf-peeping: Autumn in the Lake District
Next post »
Stonehenge: the secrets of the Stone Circle at dawn