For the 3rd of the Challenge Zoë activities for Cumbria magazine The Kendal Courier, I was invited to tackle a climbing wall.  Although I live near some of the best mountaineering sites in the country, I’d only tried climbing once before and am a bit nervous of heights. So, with a touch of trepidation, one wet afternoon my teenage son and I went off to the Lakeland Climbing Centre.  Here’s how I got on … 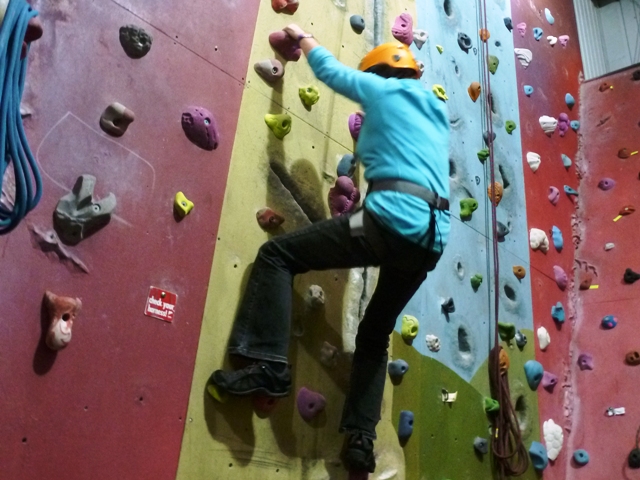 After an explanation of the different climbing experiences the centre offers and a thorough safety briefing, professional instructor Dez helped with putting on the harness and helmet, then took me to the Bouldering Wall.  By the time I was half way round the low level wall, going crabwise hand over hand, I was already feeling a strain in my legs and arms.  What a great workout!  However, I was aware I needed to save my energy for the real purpose of my visit – to get to the top of at least one of the Climbing Centre walls.

We moved on to the first of the novice walls in The Den, perfect for beginners and children.  Dez was very encouraging and made sure I took it at a pace that suited me.  I followed his  instructions, didn’t look down and made it to the top in a few minutes.  Yesss!  What a great sense of achievement; even though I was only a few metres off the ground I felt as if I’d conquered Scafell Pike.  Then it was that act of faith you have to make as you abseil back down.  Loved that bit … 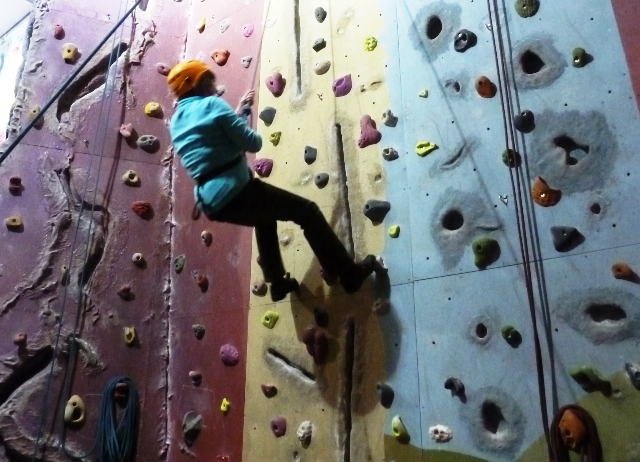 With this success I decided to have a go at the next level in the Main Hall – and this is where, unfortunately, a foot injury I’d got some time before, suddenly started playing up.  I tried for a few metres but sadly had to admit defeat and come back down.  Now the climbing baton was handed over to my son. 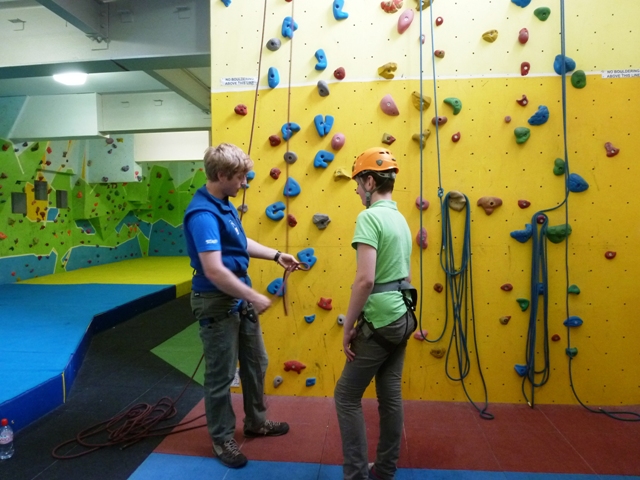 Dez took Alex through the same safety briefing and then he set off up the wall, easily finding foot and hand holds as he zigzagged upwards.  He was a natural; shot up that wall like a lemur on speed.   Next Dez coached him up ‘King Kong’, a monster of a wall; at 18m a complicated route up with an overhang at the start to challenge even quite experienced climbers.  Opposite is their 25 metre wall, the highest in England, which gives experienced climbers the chance to hone a wide variety of skills in a safe -and dry – environment.   In spite of having already climbed three walls, Alex made it to the top and was really delighted with his success in such a short time.

At the end of our session we relaxed in the newly opened Creamery Cafe area with a cuppa and well-deserved brownie.  The centre was completely refurbished and extended recently and has some of the best facilities in the country.  Alex was really chuffed that he’d conquered the King Kong wall and I was pleased to have overcome my trepidation and faced yet another fun challenge.

For more information on climbing and to book a session, visit The Lakeland Climbing Centre.  Read about my previous two challenges for The Kendal Courier; Tank Driving at Holmescales Activity Centre and Learning to Play Golf at Carus Green.