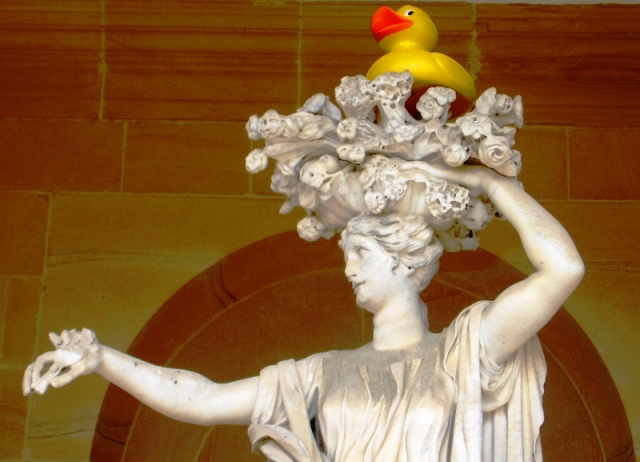 Chatsworth House: a brilliant-cut diamond in the diadem of richly decorated stately homes scattered around Britain.  Settled snuggly in the bosom of the Peak District, the very first National Park in the UK, it is a treasure trove of rich delight.  I visited Chatsworth one Easter and went on a quirky Duck Hunt around the house and gardens.  Here are some impressions of its eye-catching artistic treasures … 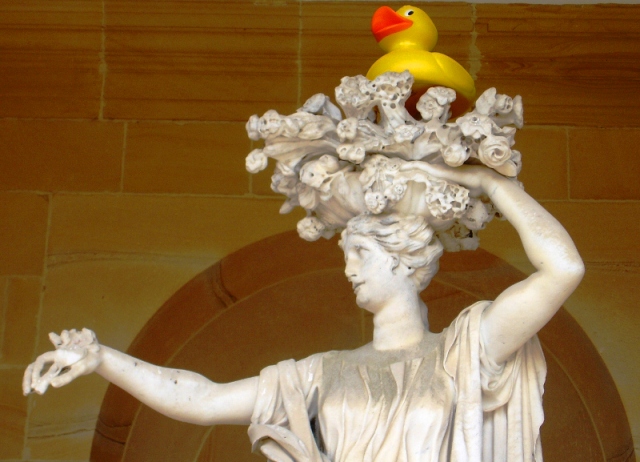 Perched nonchalantly on top of a flirtatious Greek goddess’s head sits a large yellow duck.  Flora seems quite unconcerned as she beckons visitors into her Temple, built by the 1st Duke of Devonshire in 1695.  On entering the house I have been given a map and told to look out for the ‘Easter Ducks’ hidden about the place.  This is typical of Chatsworth House; as one of this country’s largest and most popular historic houses, it would be easy to assume it has a somewhat venerable, maybe even pompous idea of its own importance – but that is very far from reality. 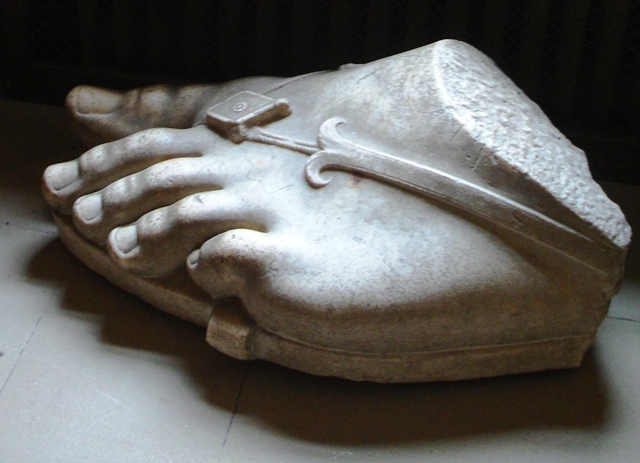 An enormous marble foot lies in a corridor as if dropped by a Roman Cinderella, causing the visitor to speculate on the size and shape of the missing body, fashioned by some ancient sculptor who could never have imagined its present position. Around every corner is curious treasure to delight, intrigue and challenge the viewer.  The Cavendish family have owned this property since the 16th century and evidence of their tastes and quirks permeate every corner. 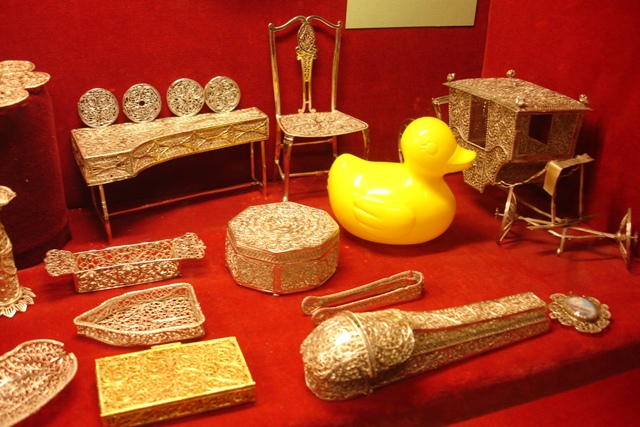 Another duck is found in a cabinet of tiny filigree objects, dwarfing a delicate carriage and high-backed chair.  Henry VIII’s Rosary curls along a cabinet in front of a box of emerald green-handled cutlery.  A fluorescent portrait magically changes colour at you look at it.  Under the stairs lies an ancient sleigh which used to be pulled by the family goat.  A couple of impressive lions lie on either side of a doorway guarding a room crammed full of statuary from antiquity, purchased by adventurous 6th Duke of Devonshire in a lifetime of spend, spend, spend. 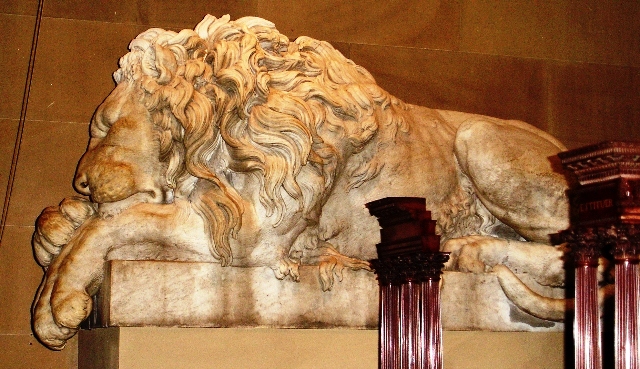 In a dressing room beside a fancy bedroom slept in by countless members of the aristocracy, is a rack of varied garments for kiddies to dress up in and play at being lords and ladies.  Taking pride of place in the Great Chamber, largest of the State Apartments (added by the first Duke for William and Mary, who thoughtlessly never visited) a large ceramic ‘buffet’is decorated with curlicues of flowers, festoons of fruit and gold platters with the bust of a child centre stage.  A delftware vase has flowers peeping out of a blue and white pagoda. The dining room is laid out with the most splendid array of silver gilt and shining tableware, ready for a visit by Queen Victoria and sailing across the damask tablecloth is another yellow duck … 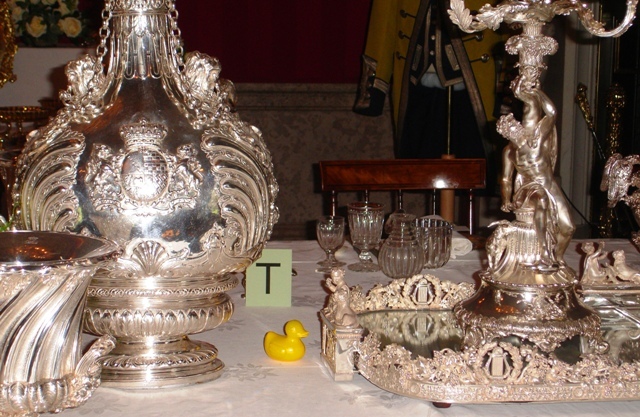 In the Music Room a violin appears to be magically suspended from a door and the very vain 6th Duke had 9 leather and gold-embossed portraits of himself made to adorn the walls. In the Library, Old Masters including drawings and prints by Rafael and Van Dyck can be found alongside quirky, colourful birds by the great American artist John James Audubon. 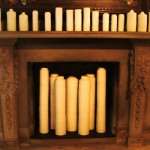 A line of white porcelain pipes sit on top of a shelf.  ‘A Sounding Line‘ installation by Edmund de Waal (author of ‘The Hare with the Amber Eyes‘)  was created specifically for Chapel Corridor at Chatsworth and is evidence of more recent family intrigue with contemporary art.  “The Cavendish family’s collections have been changing and growing since the 1550s, reflecting the tastes and enthusiasms of each generation.  The 12th Duke of Devonshire and his family continue this tradition at Chatsworth, and you can see around the house and gardens today a number of the new acquisitions that have been added in recent years.” 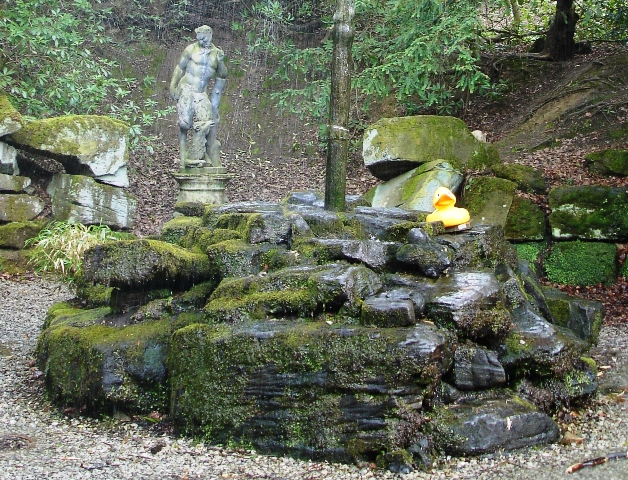 A proud profile lies amongst flowering shrubs and a wicked-looking satyr’s head sits incongruously atop a fluted column. Banana palms thrust upwards towards the sun in a glass-framed conservatory and visitors go round in circles in the green-hedged labyrinth.  As I leave the gardens I spot another duck floating calmly along the 18th c Canal beside one of the River Gods lolling on his stone bed … 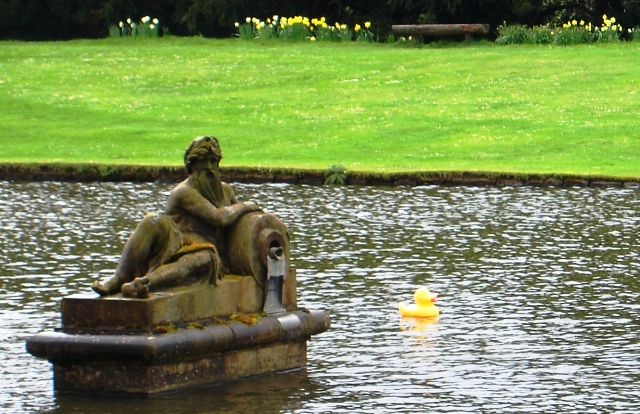 As a souvenir of my visit I bought a copy of ‘The Garden at Chatsworth’ written (and signed) by Deborah, Duchess of Devonshire. It’s a beautiful tribute to this glorious place, written in a personal and lively style. Outlining Chatsworth’s history from 1549 when Bess of HardwickBess of Hardwick bought the land to the present day, there are architectural drawings, paintings and etchings plus superbly-shot photographs of the estate through the ages and all seasons.  It’s clear that the Duchess cherishes the place over which she was chatelaine for so long. 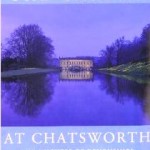 In the Preface she says,  “The garden I have known from dawn to dusk for fifty years owes its existence to masters and men of exceptional talent … No one person designed the garden at Chatsworth. It has evolved according to the taste of successive Dukes of Devonshire, unshackled by committees.  Every style of gardening has been tried; some have survived and some have disappeared … Several times the landscape was changed as if it were a putty model … The ‘Elysian Fields’ were created to please anyone who cares to come here.”