The moon gazes down into a darkness full of ghostly figures with hooked beaks, outstretched wings, fierce faces and threatening demeanour. Beneath the moon is a woman with vacant eyes clasping a head to her stomach; there is an air of warning and unknown forces at work here … It’s a house post depicting the moon and the Dzoonokwa, who lives in the woods and steals children to eat … 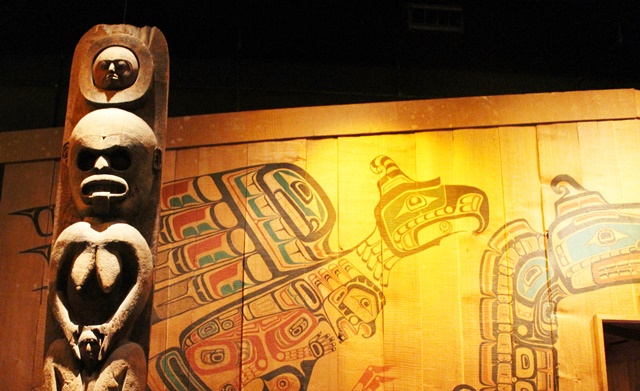 The moon and the Dzoonokwa

I’m in the Royal British Columbia Museum in the region’s capital, Victoria, finding out about this intriguing part of Canada. With some of the world’s most spectacular scenery, British Columbia is a land of startling contrasts and excitement. The Museum has more than 6,000,000,000 objects charting the Natural and Human History of British Columbia in accessible and fascinating detail. The First Peoples Gallery is unlike anything else I have ever seen – a forest of First Nations totems, masks, costumes, decorative carvings and vivid historical stories. 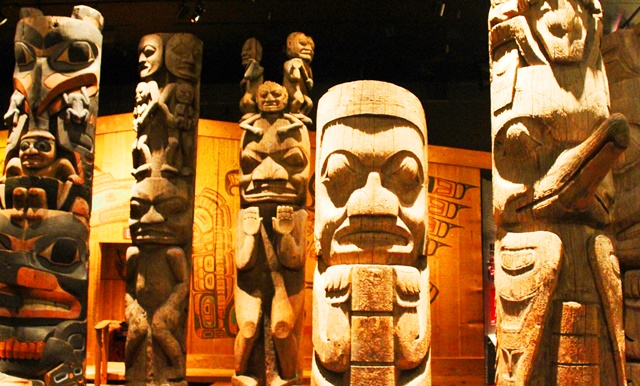 The Cowichan, Nuzalk, Gitksan, Nuu-chah-nulth, Haida and gloriously named Kwakwaa’wakw are just a few of the peoples from British Columbia. The most common symbols on both masks and totems are the thunderbird, killer whale, frog, salmon, beaver, bear, wolf, sun, moon and raven. 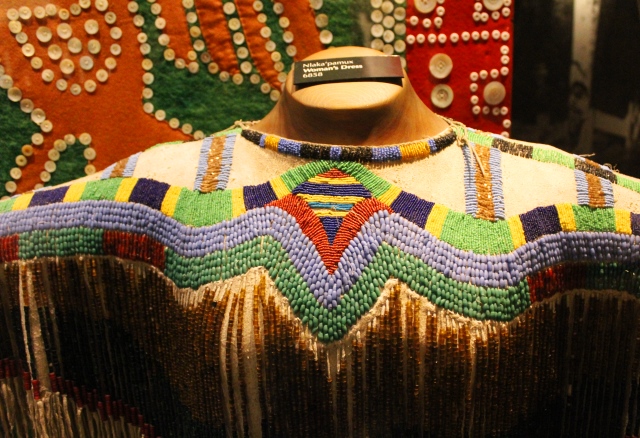 A colourful beaded dress shows off intricate quill work. A chieftain stands armed with a spear, the warm skin of a grizzly bear draped over his shoulders. Shamans dressed in fringed costumes with macabre bird masks face each other in static dance. Out of the darkness spectral masks speak of ancestor worship and terrifying gods who ruled the earth long ago. This mask’s piercing gaze caught my eye amongst many, many striking objects. 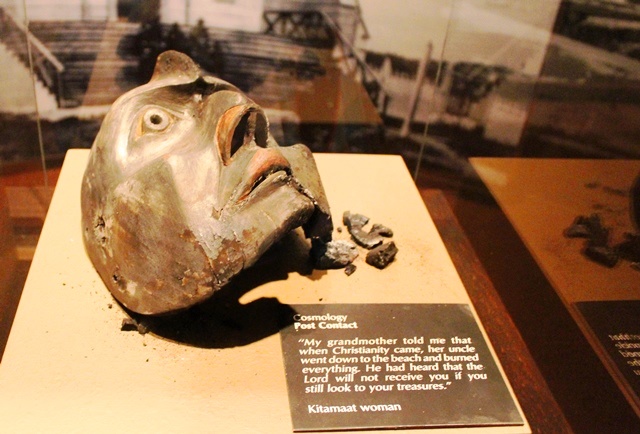 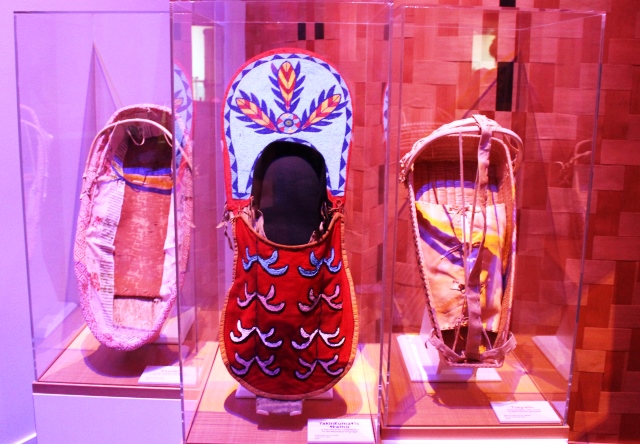 Via the ‘Becoming BC’ galleries the museum traces the arrival of Europeans from the mid-18th century. 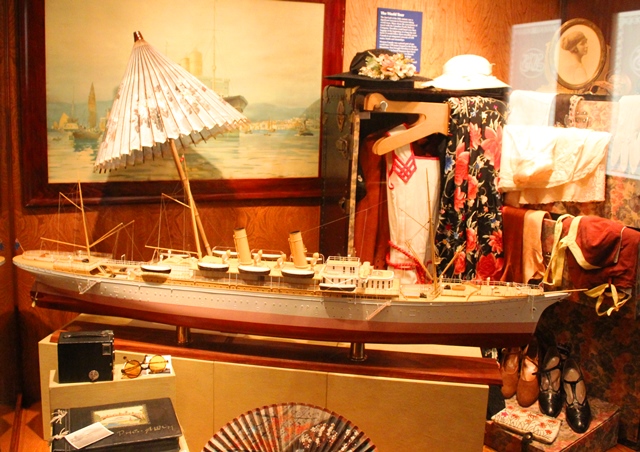 Seafaring memorabilia remind the viewer that it was a long and often difficult journey to reach the New World, though with some home comforts. In the 1790s Captain George Vancouver claimed Vancouver Island for Britain. There’s a replica of his ship ‘HMS Discovery’ and through the windows of the ‘Grand Hotel, I can see an elegant Victorian parlour. (Outside in the real streets of Victoria there are many lovely buildings from this influential period of Canada’s history and the Cowichan Trading Company store, where you can buy souvenirs and artwork made by talented locals.) 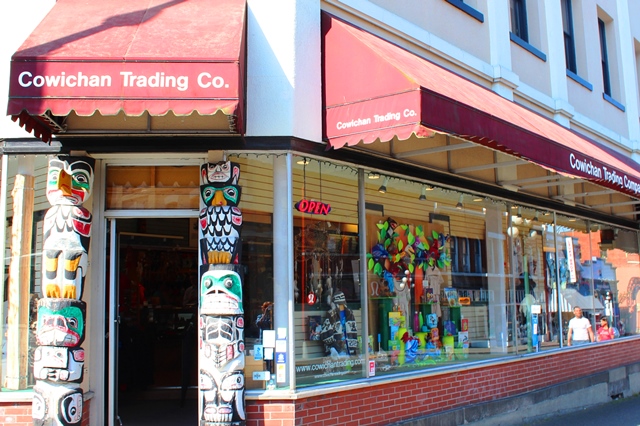 I continue my journey through time and place in the Natural History Galleries, from the earliest days of Canadian occupation, when man hunted the Woolly Mammoth. Here he is, standing tall in a hall that includes many wild animals that still live in British Columbia, including bears, moose, elk, beavers and mountain lions. 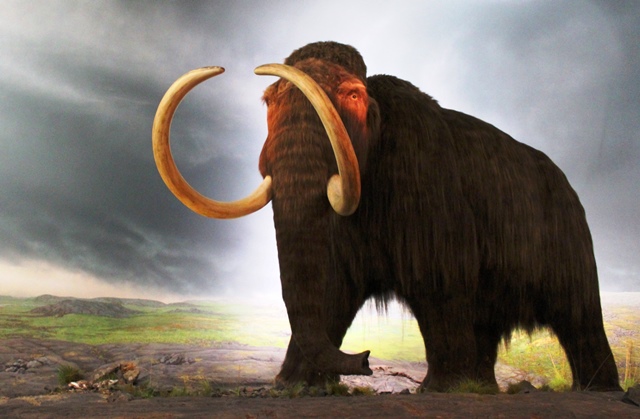 A giant coin glitters in the entrance to an excellent exhibition El Dorado in BC. It’s the world’s first Million-Dollar coin, weighing 100 kg, 99999 pure gold bullion. The famous ‘Gold Rush’ from the mid-1800s resulted in mainland British Columbia being made a crown colony. The Yukon, isolated for many years, became a magnet for gold-diggers as the Klondike River gave up its riches to eager prospectors. 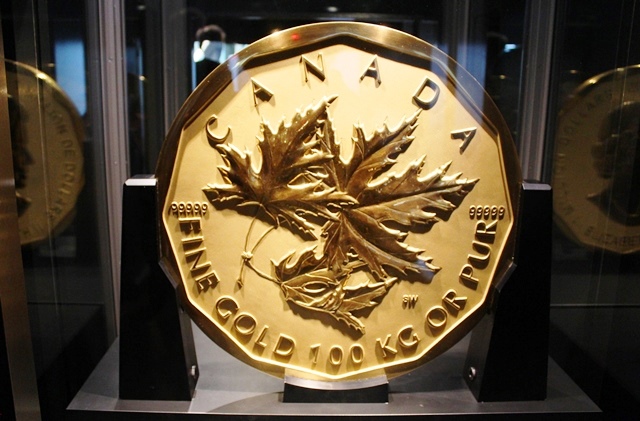 In the exhibition visitors can “…marvel at the dazzling Turnagain Nugget, the largest existing gold nugget from BC at 1,642g (52 oz.), see a real stagecoach on loan from the Historic O’Keefe Ranch, and witness the cultural influences of gold through the Bill Reid gold box, just a sampling of the more than 400 objects on display. It includes the exclusive North American engagement of Allure of Gold, a companion exhibition of pre-Hispanic gold art, on loan from the Museo del Oro in Bogotá, Colombia.” It’s absolutely mesmerising – a priceless golden treasure trove that captivates and delights. And of course the Royal British Columbia Museum shop has plenty of souvenirs to remember this visit 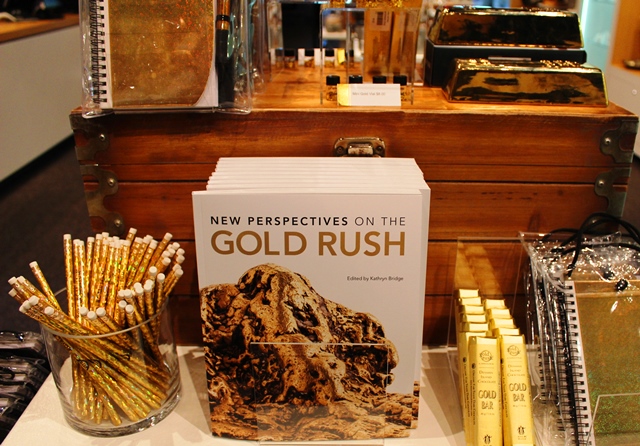 Around Victoria are many totems celebrating this region’s close ties with the First Nations. In Thunderbird Park there are replicas of the totems safely housed inside the Museum next door. The world’s largest free-standing totem is in Beacon Hill Park. In the grounds of the elegant Parliament Buildings, stands the Knowledge Totem made by Master Carver Cicero August and his sons of the Cowichan Tribe, to commemorate the Commonwealth Games in Victoria, British Columbia 1994. 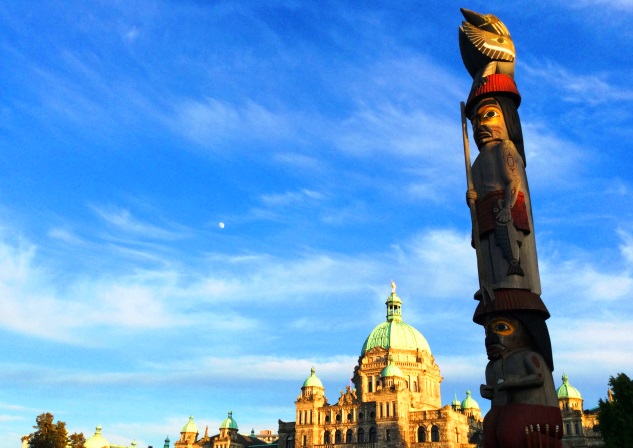 The four-metre cedar-wood Kwakiutl Bear Pole gazes down on tourists clicking their cameras, locals jogging in the spring sunshine, tour boats and ferries zipping across Inner Harbour and all the razzmatazz of 21st century Victoria; an impassive link to a proud heritage in Victoria, British Columbia. 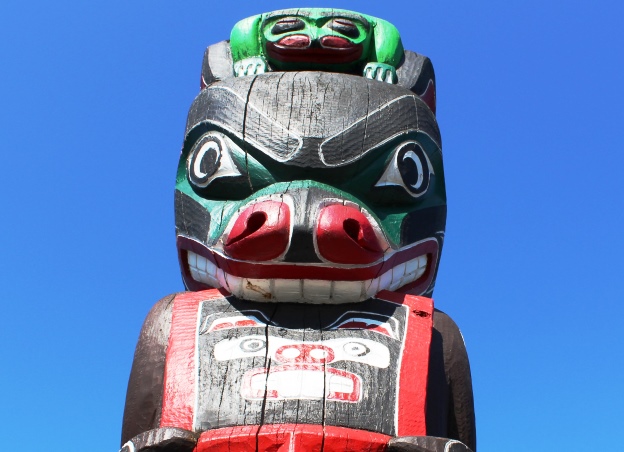 I stayed at the Hotel Grand Pacific, overlooking Victoria Inner Harbour – check out this video to see what fab views you get from the 10th floor!

Many thanks to Destination Canada for organising a truly memorable trip and Hello BC for such a warm welcome. For more interesting reading on Victoria British Columbia join fellow travellers: Kathryn Burrington Whale-watching and Cities on the edge of Nature trip, Gary Bembridge on The Other Side of Victoria and Lucy Dodsworth on a Weekend in Victoria.

Click here for lots of information on the many things to see and do in British Columbia. 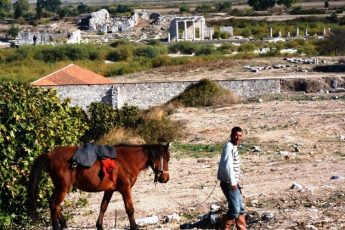 « Previous post
Become a Parisian during your trip to Paris
Next post »
The sights, sounds and sensations of an evening in Jerez, Spain