A funky Food Tour of hipsterish Hintonburg in Ottawa 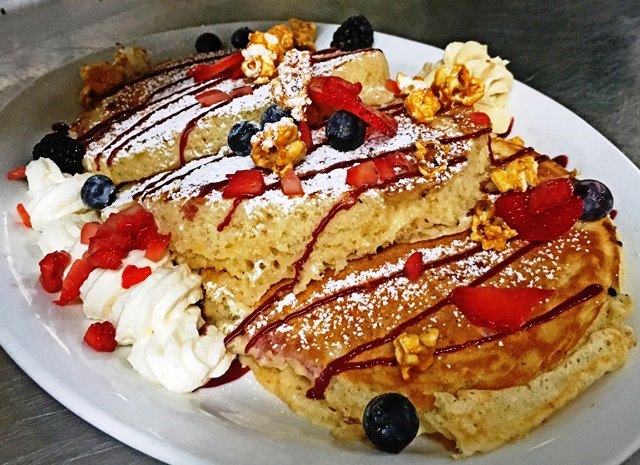 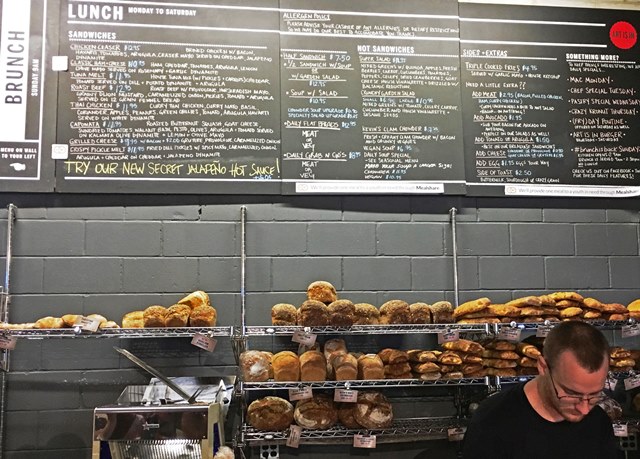 Art is In Cafe menu

The smell of freshly baked bread mingled seductively with caramelized onions, thai curry, toasted cheese and clam chowder. A buzz of chatter hummed round the industrial-chic cafe as customers tucked into wholesome, tasty food in one of the most popular, and off-the-beaten trail cafes in Ottawa. I was at Art is In Bakery with guide Stefanie Siska of C’est Bon Cooking at the start of a unique food tour in Hintonburg, known as the ‘Burg’. It’s a hip neighbourhood of the city that’s up and come, reinvented itself from a hard-core working class district to THE place to go for eating out, independent shops, creative businesses and quirky coffee houses.

Art is In lunch

I was given a behind-the-scenes peek round Art is In cafe. From a whirl of very busy chefs, plate after plate of delicious food emerged; light-as-air croissant, door-stop sandwiches and scrumptious pancakes. In the bakery next door, crisp baguettes, hearty wholemeal loaves and many more tasty bakes were being loaded up for delivery around the city. It was a wrench to leave this foodie heaven and emerge into the unprepossessing surroundings of City Centre Avenue industrial estate. 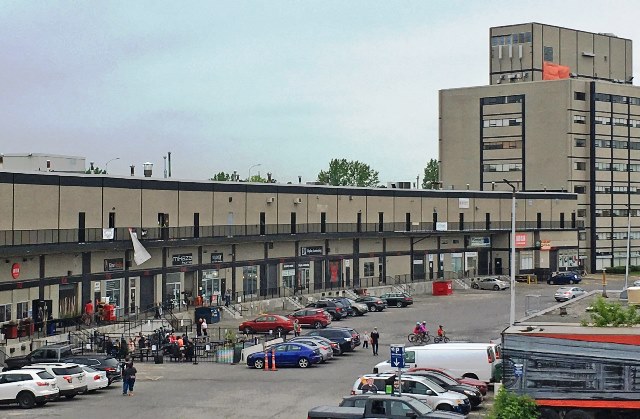 However, our next stop on the food tour, punnishly named ‘Beyond the Pale Brewery, was only a couple of units away. This brewery is most definitely on the funky scale with beers called Pink Fuzz (grapefruit), The Darkness (oatmeal stout), Saison Tropicale (pineapple) and their classic Pale Ale Project. Brewer Shane Clarke told the story of two mates setting up one of Ottawa’s most popular and distinctly quirky breweries. “We want people to have fun with our beer. Whether it’s tasting with us at the brewery, drinking at home with friends and family, enjoying a pint at one of our great licensees, or joining us at a festival to spin the Wheel of Cask.” 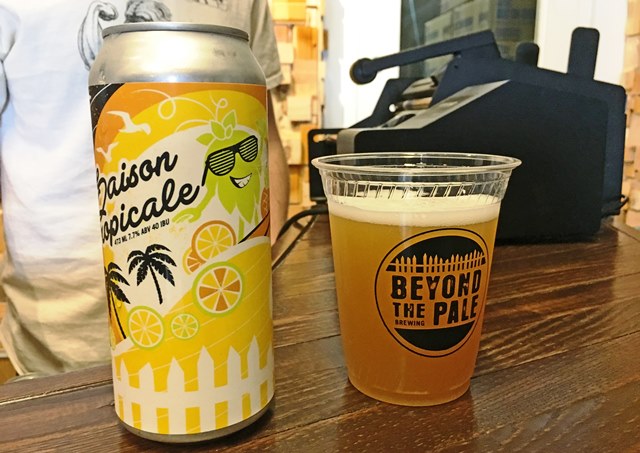 Beyond the Pale beer

We headed off then to the Happy Goat Coffee Company, hidden away down a side road you’d never come across by accident. But the cafe was heaving, with chatty people trading gossip whilst a guy played the piano. “At “Happy Goat Coffee” we promote the niche coffee market by encouraging neighbourhood-based small batch coffee roasting” My cappuccino was definitely a cut above the Costa brigade – and who wouldn’t love a place that provides bone-shaped dog treats for its canine customers? 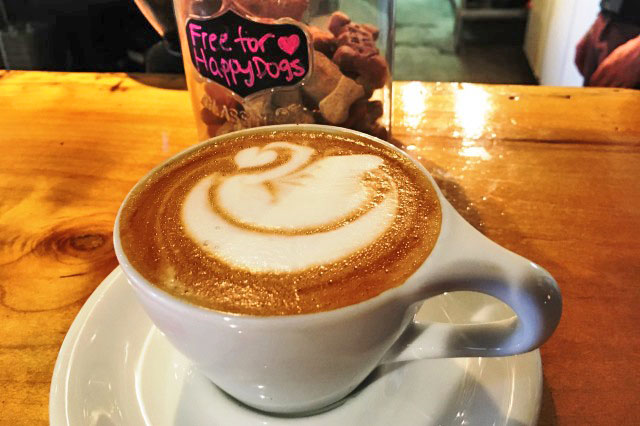 With coffee you’ve got to have cake, haven’t you? At Suzy Q Doughnut Store, you get the best BEST doughnuts in Ottawa, judging by the queue out of the door onto the street. Flavours include Raspberry Cassis, Salty Caramel, London Fog, Sugar Munnki, Bloop and the Canadian star, Maple Bacon. Lording it over the store is a large moose head garlanded with flowers. 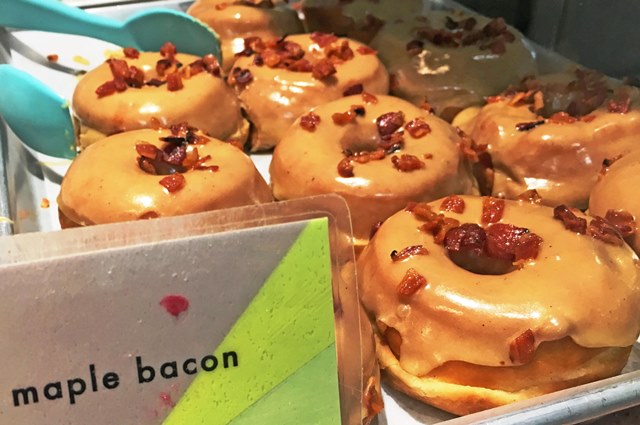 Walking the streets of Hintonburg is a bit like walking on a film set. You can imagine a Canadian version of ‘Friends’ being set here. Stefanie said it was one of her favourite suburbs of Ottawa as it has its own distinctive brand of ‘cool’, being both friendly and interesting. She pointed out the decorated water hydrants, part of city art that is prevalent throughout the country. We called into Maker House, a furniture and craft store on Wellington Street. They also have a branch in downtown Byward Market. Here you can find a huge variety of top quality artisan wares. I fell in love with a silky-smooth wooden platter featuring the Maple Leaf commemorating Canada 150 birthday celebrations but it was heavy (and expensive) so I had to content myself with a couple of delicate Birch Bark bookmarks. 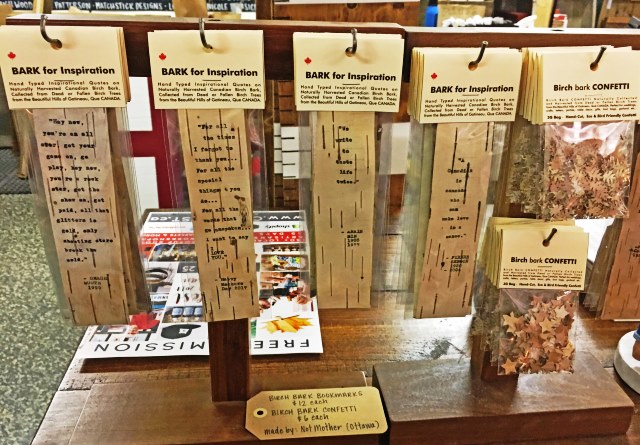 After all the filing food and drink it was a relief to stop by Simply Raw Express, a ‘vegan, gluten-free, plant-based, organic restaurant, specializing in cold-pressed juices and clean eating.’ Stefanie explained it was set up  in 2006 by Natasha, best-selling author and raw vegan of 23 years. Regular readers will know I’m more of a steak and chips woman, but I must admit the Collard Wrap filled with hummus, cabbage and a side of spiralized carrots with a Peaceful Warrior smoothie – bananas, kale, hemp & flax seeds and Sun Warrior protein (phew!) – was simply delicious. 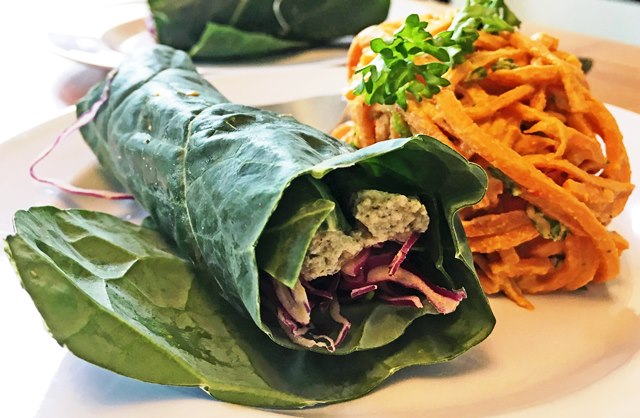 By now I was starting to feel extremely full, which was a shame as the next place on our C’est Bon Food Tour was a funky little Mexican restaurant, La Cocina. Stefanie suggested we had a drink first and a refreshing margerita quickly materialised. I’m ashamed to say I could barely do justice to the spicy tacos (made with ‘in-house hand pressed corn tortilla) but I can most definitely recommend them. 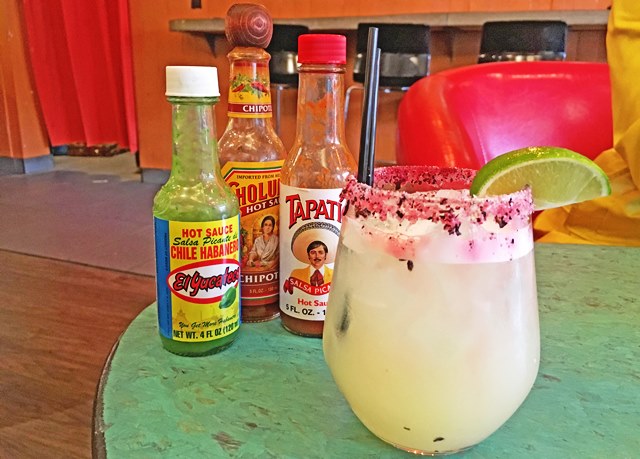 Finishing off our drinks, it was time for the last stop – Stella Luna Gelato Cafe. Oh yes, superb Italian gelato in the suburbs of Ottawa. The last time I had such smoothly divine ice-cream was on a weekend in Rome; this was just as good. The multi-award winning gelateria is the genuine article. Master Gelato Chef Tammy Giuliani ‘combines old-world techniques and recipes with a passion for finely prepared food.‘ 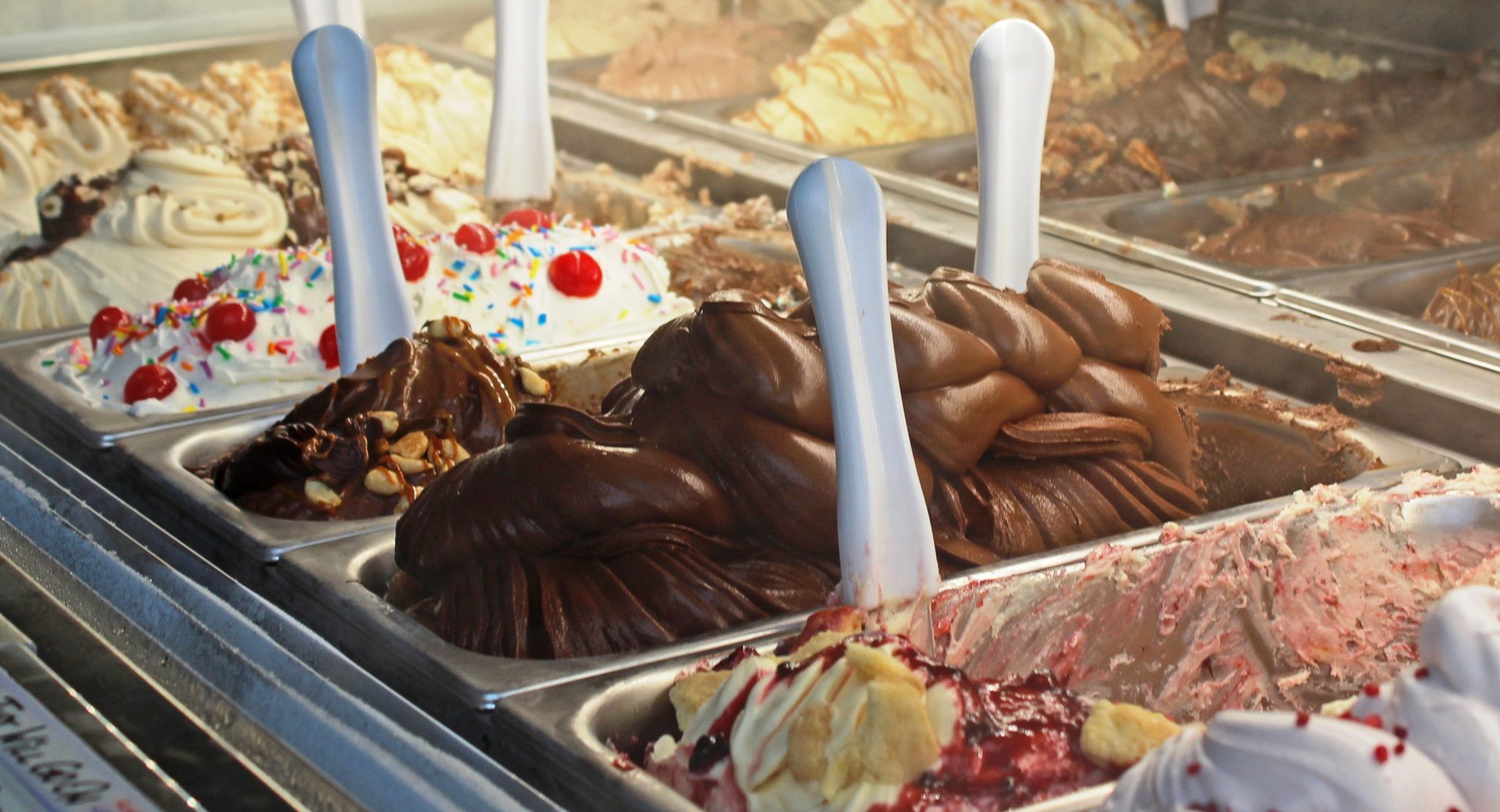 I met both Italian Tammy and his Canadian wife, whose love story is behind the success of their ice-cream, cakes, tarts, pies, crepes and coffee. It was only polite to have a tub of their Chocolate Sundae (rich chocolate, maple, bourbon, candied pecans with a fudge ripple) with a dash of Strawberry … A truly scrumptious end to a really excellent food tour. 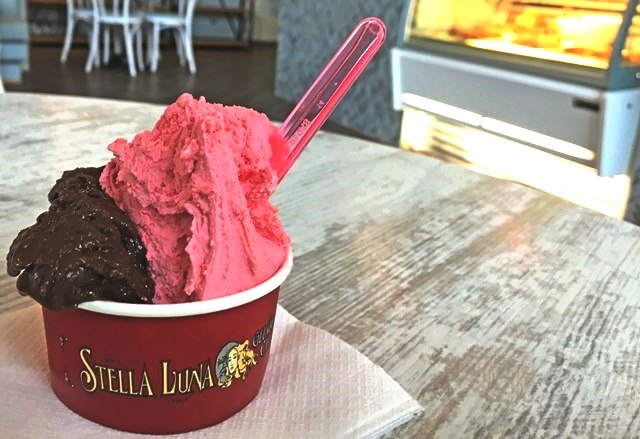 Many thanks to Stefanie Siska of  C’est Bon Cooking for a fascinating and very tasty glimpse into the food and drink on offer in Hintonburg. Grateful thanks also to Air Transat, Destination Canada and Ottawa Tourism for sponsoring my visit. It was a pleasure to explore more of Canada, a country of unforgettable experiences. 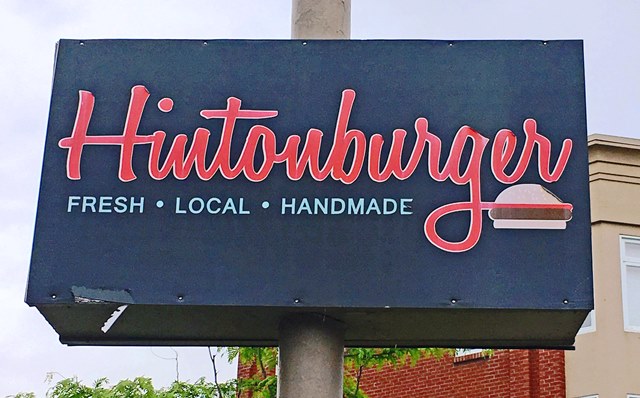 Check out Canada Keep Exploring to discover more about where to go and what to do in Ottawa. Return flights from Gatwick to Toronto with Air Transat. Canadian Affair offers an 8-day package tour Ontario Taster Holiday which includes 2 nights in Ottawa.

Find out more about Canada in these articles 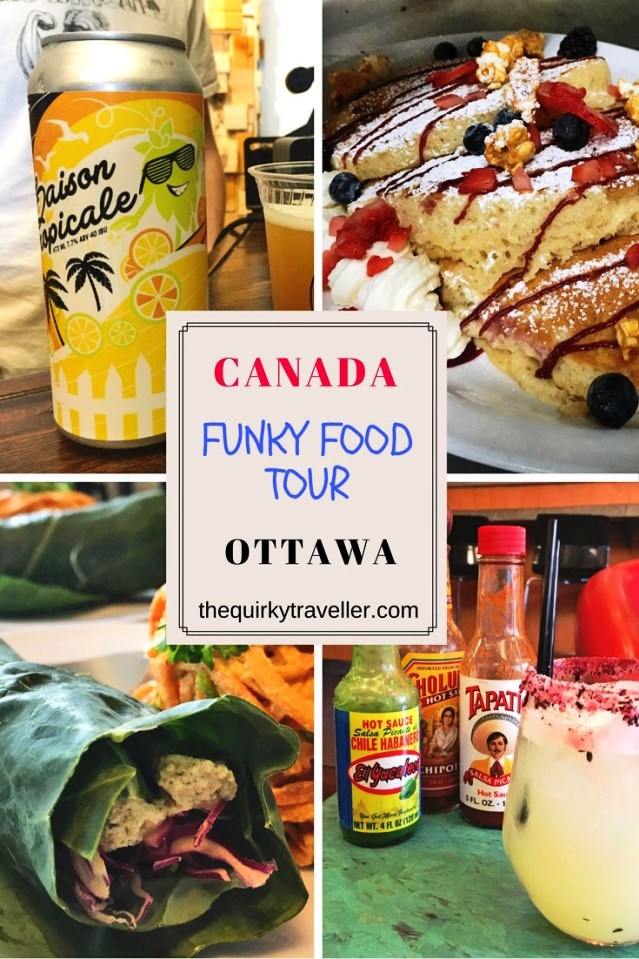