Go on a Photography Treasure Hunt in the English Lakes

“That’s not it. Look. The mountain’s in the wrong place.”

This was the conversation ricocheting around the Cumbrian fells as three of us tried to pinpoint the exact place artist Joseph Farington had painted his watercolour of Rydal Bridge in the 1700s.  Eventually we all agreed on roughly the right spot, though it seemed quite different today. What do your think?

You see, the river seemed to have changed its course, the road is now in a slightly different place and we couldn’t see the fell because of the trees’ foliage and the mist from the drizzle … All part of the fun of the Wordsworth Trust’s Smartphone App, helping you to see more of the glorious English Lakes.

Back in 1769, a famous writer and poet called Thomas Gray went on a walking tour of the Lake District and wrote a descriptive journal about where he went and what he saw. It was the first example of modern travel writing with its vivid descriptions of the 18th century scenery.  A few years later an artist called Joseph Farington used a copy of Gray’s journal to follow in his footsteps, painting the scenes that Gray had described. 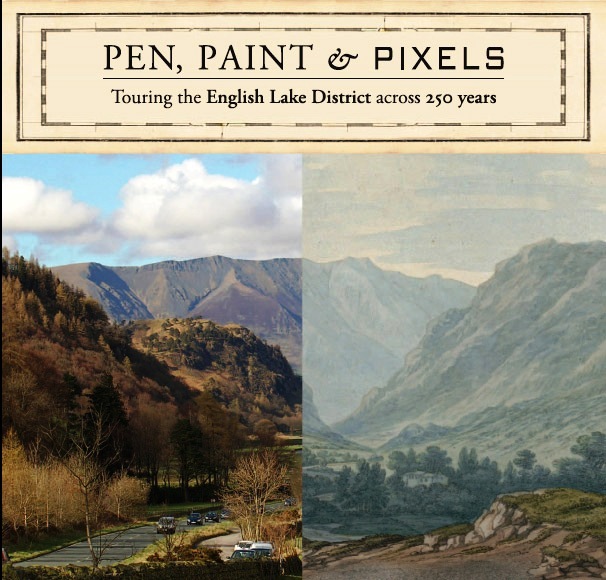 Fast forward to the 21st century; John Murray, a publisher from London, inherited Gray’s original notebooks and decided to do exactly what Farington did almost 250 years before. He found the locations and took digital photographs of the views, illustrated in his book ‘A Tour of the English Lakes’.  The words, pictures and photos inspired an exhibition at the Wordsworth Museum, Grasmere, called Pen, Paint & Pixels in 2013.   Their App enables the visitor to go on a sort of treasure hunt in search of the actual sites.

Consulting the excellent App, which uses the latest Satellite technology, Google and Ordnance Survey maps, we then set off to find the next gem – Rydal Falls. What’s really good about the App is that there are copies of the original paintings and engravings plus often Grey’s descriptions and even hints on how to find the right spot.  Our greatest challenge was the occasionally intermittent signal which sometimes meant a delay in getting info – but that added to the adventure!  Not too far from Rydal Bridge we found the Falls, in one of the most delightful viewing positions you could imagine.  I won’t spoil the surprise but believe me, it is an absolute treat – AND, it is virtually identical today to when Joseph Farington did this pretty sketch.

There are sites all over the Lake District including Bassenthwaite, Derwentwater and Borrowdale, Ullswater and Patterdale, to Windermere via Rydal and Ambleside.  Read my review of the Pen Paint & Pixels Exhibition and go to The Wordsworth Trust site for more information.