It’s a real pleasure listening to people talk about their passions. They become animated, articulate and  engaging. Their enthusiasm is infectious and can be a catalyst for change. In recent weeks I have been chatting to a number of people closely linked to the cultural scene in Cumbria and each person had a unique perspective to share.  This was part of the Anchorhold project ‘…collaboration between the architects, Grizedale Arts, Lakeland Arts and the artist Marcus Coates and has been funded with the generous support of the Visit England and Arts Council England Cultural Destinations Project – Lakes Culture.’ 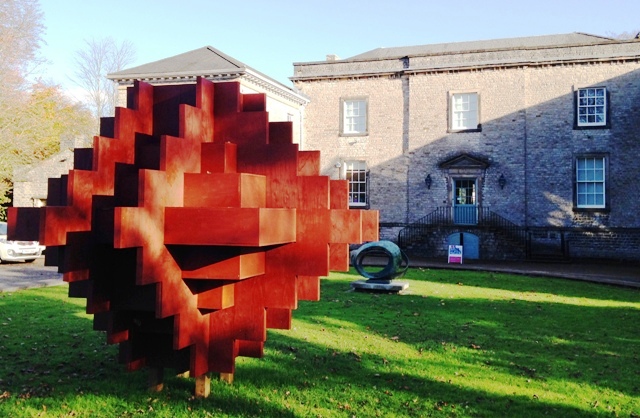 Grizedale Arts Anchorhold is a large wooden structure of interlocking pieces designed by the architectural practice Sutherland Hussey. It vaguely resembles a building made by a Jenga fan and is currently situated outside beautiful Abbot Hall Gallery in Kendal. The name ‘Anchorhold’ refers to a tenth century hermitage in which anchorites would be walled up in order to think on issues that impacted on society. It turns out the position is especially appropriate. The vicar of Kendal Parish Church, the Rev Rob Saner-Haigh explained that there is an ancient path from the church next door to Abbot Hall up to the Anchorite Well. In 1430 “4 December. Commission to the Prior of Cartmel to confine Alice Skawseby in a certain house built for anchorites near the church of Kirkeby in Kendall.” 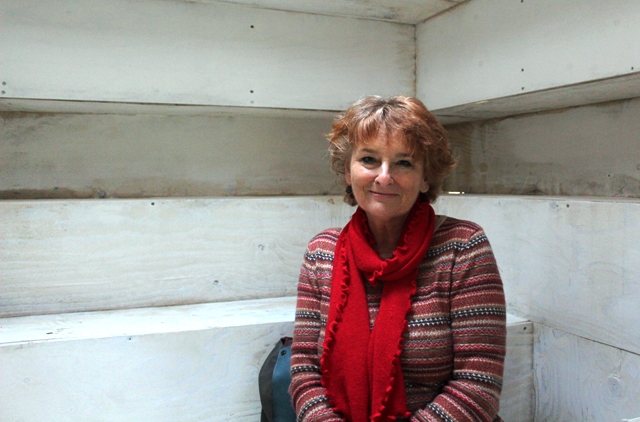 Due to very wet weather during the time I was talking to these people, it wasn’t always possible to sit inside the sculpture so we were able to use one of the rooms in Abbot Hall, set up as part of Grizedale Arts The Nuisance of the Landscape- The Sequel exhibition. 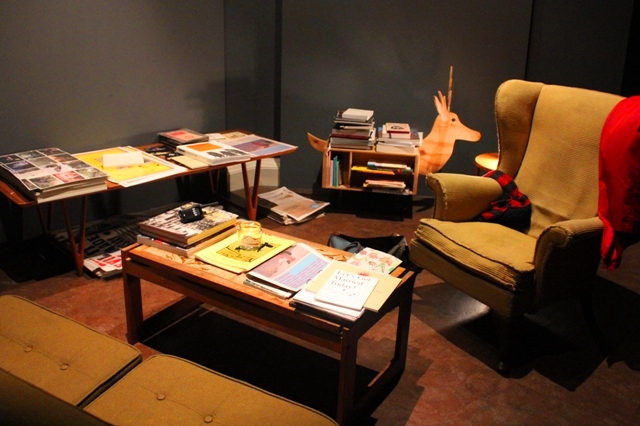 Local photographer Florence Acland was the first person I talked to. Living in Ambleside, from a highly creative family, Flo has developed a unique photographic perspective in portraiture and design. 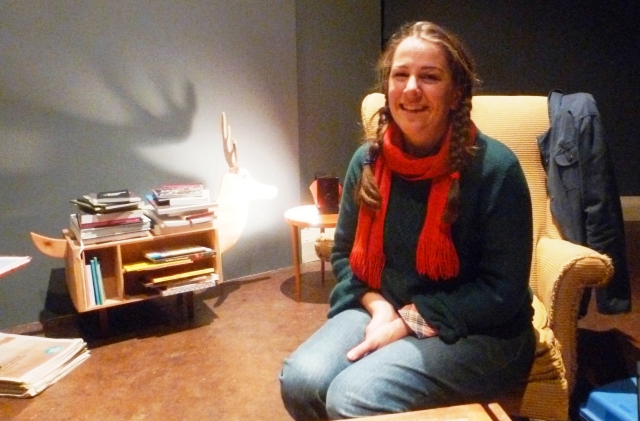 She assembles everyday objects collected by her father or family into intricate artworks. Shen takes a series of photos and then dismantles them – the photograph is the art. She hopes Cumbria and the Lake District will become better known nationally for its cultural diversity and wants to encourage visitors to come the this area to see the quality  on offer. “Cumbria can be a bit like an island because of its geography, slightly cut off, but I want our art to reach as many people as possible.” 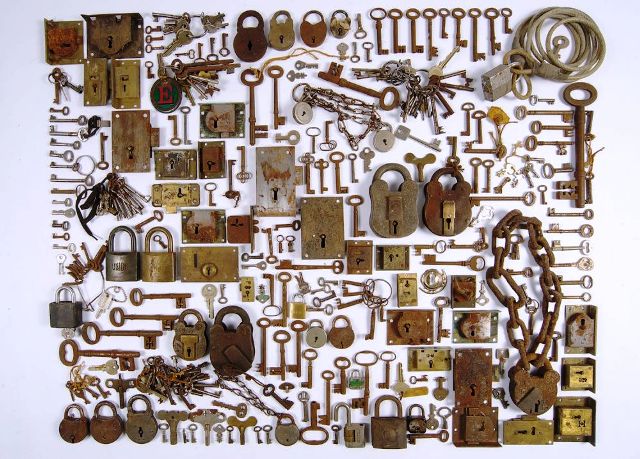 I then spoke to Hilary Claxton, owner of Beech House, a luxury Bed and Breakfast in Kendal. She often has guests staying with her who are performing at the Brewery Arts Centre or visiting Abbot Hall. “I really love the fact that we’ve got Abbot Hall within 5 minutes’ walk of our house.  Just to be inside this building makes me feel special.” During the summer she attended the Barbara Hepworth ‘Sculpture Day’ and felt it epitomised just what a great cultural experience could be, working as it did on many levels. 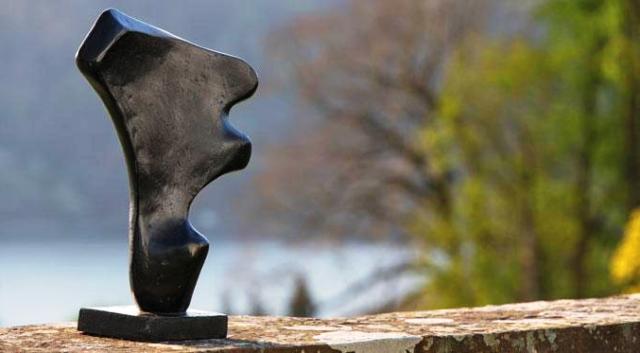 Having learnt a lot about the great artist’s techniques and works, the participants got a wonderful ‘hands-on’ opportunity to make a sculpture in the style  of Hepworth.”I’ve put mine in the back garden – you must come and see it!” Hilary went on to talk about the close connection that her business has with cultural life in the area. “Abbot Hall sends us guests, speakers, artists – we’re listed on their website and other people find us there. Barbara Hepworth’s daughter stayed with us. Obviously we benefit from having them stay with us but it also brings culture much closer to us and stimulates my interest in the arts locally.”

The next person to the Anchorhold conversation was Charlie Gere, Professor of Media Theory and History in the Lancaster Institute for Contemporary Arts, Lancaster University and Chairman of the Board of Trustees of Grizedale Arts and on the Board of Abbot Hall.   He talked eloquently about the local arts scene and the history of Grizedale Arts. “It’s aim was to provoke a series of questions about art in the Lakes, about the landscape, about culture. They work very closely with communities, for example Coniston, to bring high-end art. Grizedale Arts is better known in Japan than it is in some parts of Cumbria.” 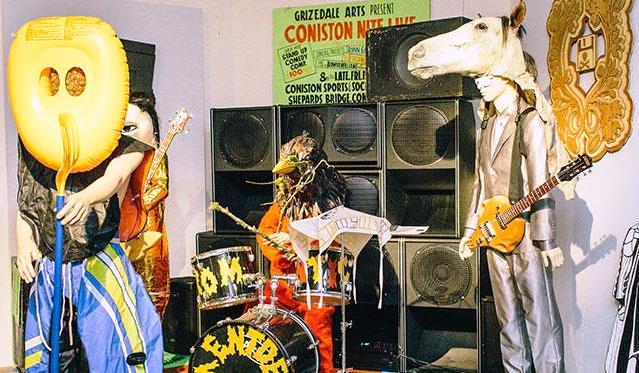 Charlie outlined his ideas for developing a “more autonomous local culture, based on the model of the Working Men’s College,” one of the earliest Adult Education institutes in the UK. Village halls could be become places where anyone who was interested could explore their artistic creativity.

I also talked to Richard Greenwood, Head of Operations Cumbria Tourism, Jamie Barnes, freelance curator and the Revd Rob Saner Haigh, vicar of Kendal Parish Church. You can read our conversations in this article on Cultural Tourism. 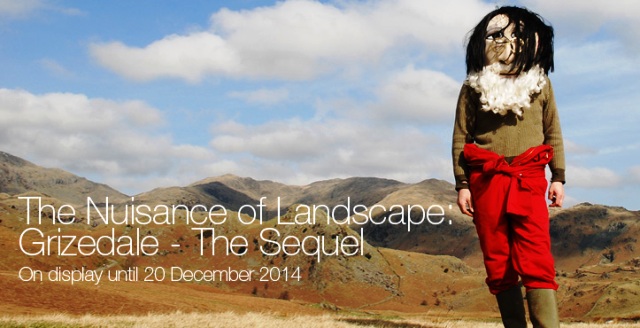 The Nuisance of the Landscape: Grizedale – The Sequel

Anchorhold is part of The Nuisance of the Landscape: Grizedale – The Sequel, a fascinating, quirky and at times challenging exhibition which Grizedale Arts describes ‘a major survey show of our work over the last 15 years; from rotting sculpture in a forest to super social utility. It features the work of several hundred artists we have worked with, many household and craft objects from our collections, and also represents recent community projects we’ve done at home and abroad.’

The exhibition runs until December 20 2014 across four venues in South Lakeland:  Abbot Hall Art Gallery, the Museum of Lakeland Life and Industry, Blackwell Arts and Crafts House and the Coniston Institute. Don’t miss it!