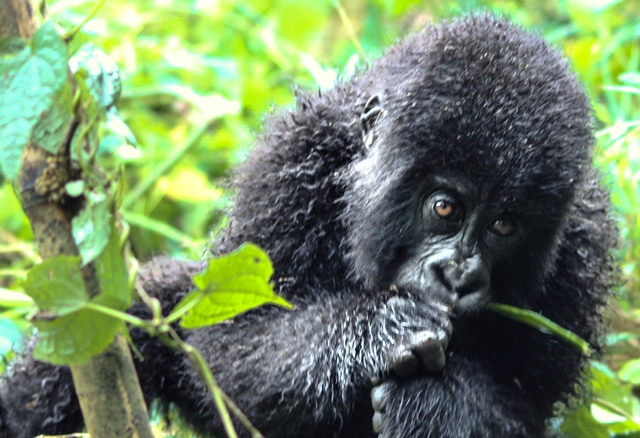 He gazed down with resignation and a dash of superciliousness, as if to say, “Oh no, not you again. I thought I’d avoided you lot up here. Can’t a guy have his lunch without forever being interrupted and photographed?” 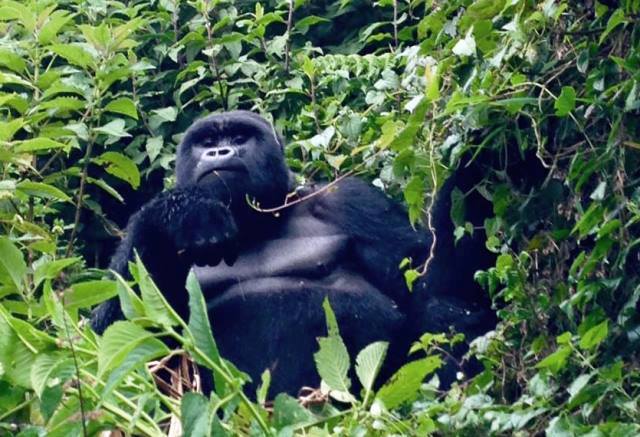 He had a point. A group of us had been watching a family of mountain gorillas in Rwanda eating and playing a little further down the forest but when they dozed off, a couple of us had followed one of the guides higher up the volcano to see this fine fellow. He clearly thought he’d escaped the hoi poloi, so was not very pleased to see us … 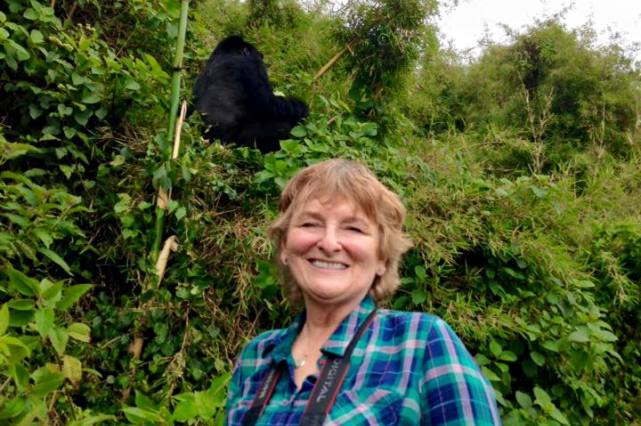 Gorilla he say, ‘I want to be alone …

As soon as we started clicking away with our cameras, this massive gorilla turned his back on us and shifted higher up in his tree.  When we stopped taking pictures, he peered back round to see if we’d gone, realized we hadn’t and turned his back again. No body language could be clearer. But, oh, what a privilege to be this close, to see such a splendid creature in his own habitat, understandably not as thrilled as we were, but totally at ease and behaving as naturally as possible, given that we humans were in the middle of his territory. 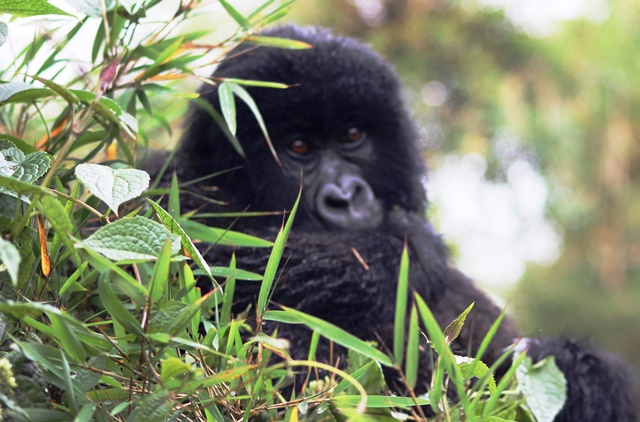 Baby gorilla in the mist

“There is more meaning and mutual understanding in exchanging a glance with a gorilla than with any other animal I know. Their sight, their hearing, their sense of smell are so similar to ours that they see the world in much the same way as we do. We live in the same sort of social groups with largely permanent family relationships. They walk around on the ground as we do, though they are immensely more powerful than we are.” 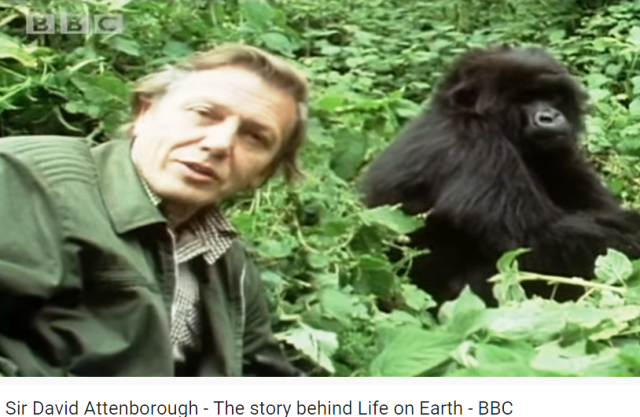 No-one who has seen the moving TV footage of Sir David Attenborough can forget the sight of the world’s most respected wildlife specialist grinning with delight in the midst of a family of lively gorillas. I certainly couldn’t, so when Uber Luxe Safaris invited me to see the magnificent mountain gorillas in Rwanda, East Africa, I leapt at the chance. 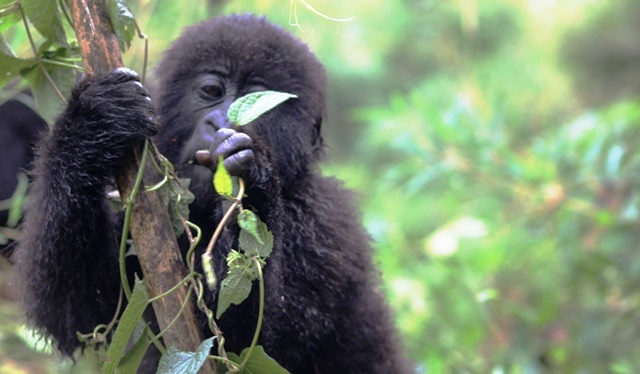 Rwanda leads the way in mountain gorilla conservation; there are less than 900 left in the world. The Dian Fossey Gorilla Fund, founded by Dian Fossey in 1978, is, “… dedicated to the conservation and protection of gorillas and their habitats in Africa. We are committed to promoting continued research on the gorillas and their threatened ecosystems and to providing education about their relevance to the world in which we live.”  Eight mountain gorilla families have been ‘habituated to humans’ in Rwanda (other families have been left to their own devices) and each family has no more than 8 visitors plus 2 guides for a maximum of one hour a day. Everybody needs a permit ($750 in 2016), ensuring a significant amount of money is raised each year to help fund conservation. 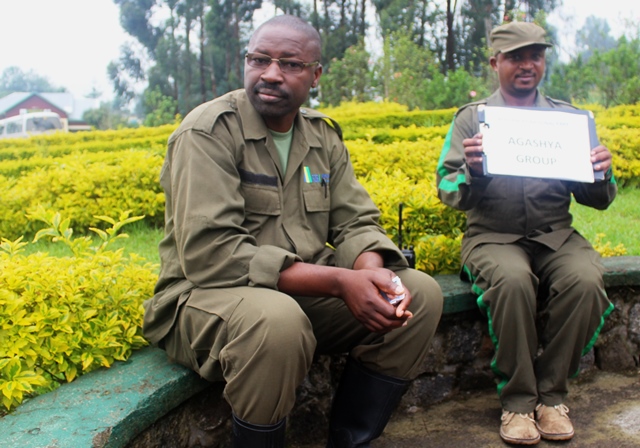 Our group was led by guides Patience and Mr D. My porter was a lovely man called Jean de Dieu, who helped me to clamber up Mount Sabyinyo in Volcanoes National Park, much needed as the path was often muddy and steep. Altitude made the trek harder; we all needed regular stops to catch our breath and get our energy back. Trackers had gone on ahead to find the Agashya Group (originally called Group Thirteen) which are supposedly one of the easier groups to trek to. Well, no-one had told them; on the day we went they had decided to hike much higher up the volcano and it took us over 2 hours of fairly tough climbing through bamboo forests to reach them. We were joined by an armed guard, a member of the Volcanoes National Park Security team. (His gun was to protect us against wild buffalo, NOT to shoot gorillas!) 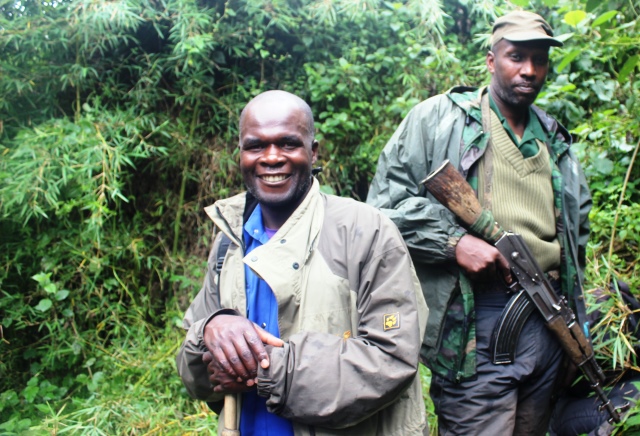 When we got close to the gorillas (at about 9,000′), we had to leave all our belongings, walking sticks, food and drink with our porters and just take our cameras, following the guides up the final trek. Getting closer we could hear them breaking branches. I glanced around and saw a shadowy shape hidden in a bamboo bush. “Oh there’s one,” I whispered. Mr D just smiled and said, “Wait and see – there are plenty more ahead.” We entered a densely overgrown clearing and there, right in front of us, was a huge silverback, two youngsters and a female. They glanced up as we oooohd and aaaahd, but quickly went back to munching their bamboo sticks.  Mr D made a grunting noise and the silverback grunted back, apparently telling him we were welcome to join his family … 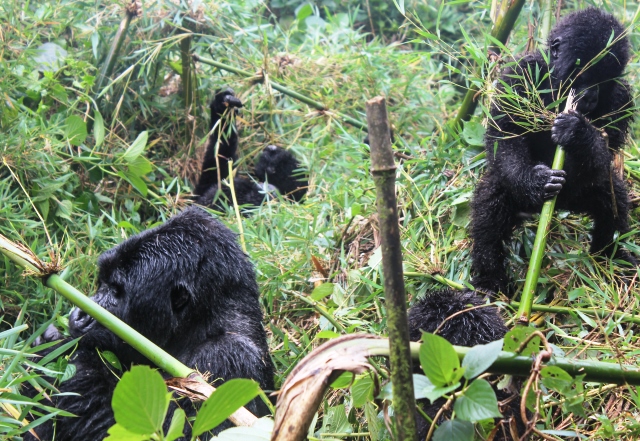 We sat down on the ground and got our cameras ready to take pictures. Almost immediately, the young ones, no more than two years old, started a mock fight. Their father, the huge silverback Agashya, ignored them completely as they crashed about, beating their little chests and every so often checking to see if we were looking at them. The only problem was, from where I was sitting, the bamboo kept getting in the way of the scene, so I gave up trying to get a photo and just enjoyed the show. After about 10 minutes they stopped and one of them flopped on the ground, put his arms behind his head, waved his legs in the air and gazed at us, seeming to say, “There you go. That what you came for?” 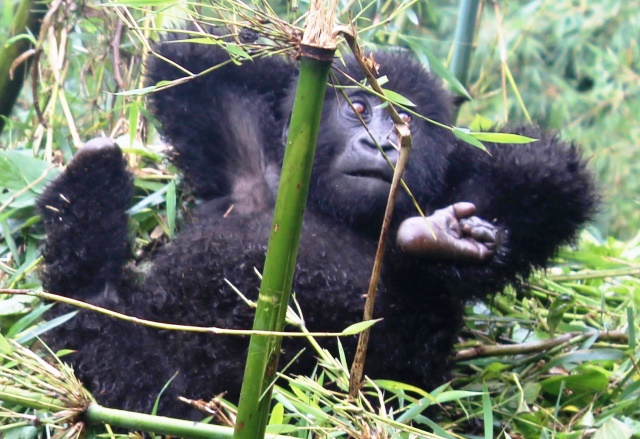 Above us, there was a great deal of noise as another gorilla swung about in a tree, which swayed precariously over my head. I was concerned that it might break and I’d get a rather closer encounter with gorillas in Rwanda than I had bargained for, but Patience assured me I was safe. Suddenly there was a rustling in the bushes to our left and a female gorilla emerged. Mr D ‘spoke’ to her and then said we were fine, to just keep back as she went past. As you can see from this photo, she came VERY close, stepping over my feet as she walked by. Her thick black coat was just inches away; the temptation to stroke her as she passed was almost overwhelming … 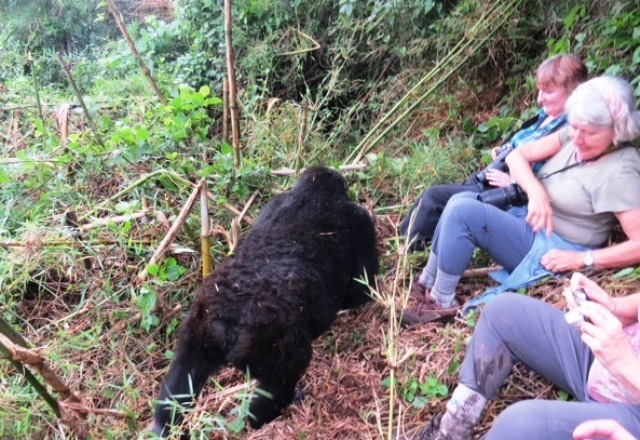 Eventually the family seemed to have had their fill of bamboo and one by one they settled down to have a little rest. Gorillas sleep in trees, making ‘nests’ to curl up in during the night, but in the daytime they take regular naps in between eating huge amounts of tree stems, bamboo shoots, fruit and the occasional ant, caterpillar or termite to vary their diet. Adult male gorillas consume up to 40lbs (80kgs) of food a day and can weigh up to 440 pounds, reaching a height of six feet when standing on two legs. Mature male gorillas are known as “silverbacks” for the white hair that develops on their back at about 14 years of age. They share over 98% of their DNA with humans.  Females have a gestation period of 8.5 months and nurture their young for several years. Generally, females give birth to one baby every four to six years. Only a few days before we arrived in Rwanda, TWINS had been born to one of habituated groups; really good news for the survival of the species. 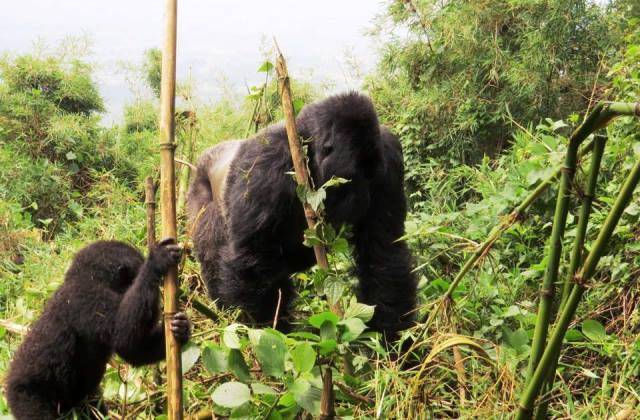 When I came back from seeing the big male gorilla described above, we heard that one of the youngsters had put on a funny performance, swinging about on a bamboo pole, until his father had clearly had enough of the little show-off and walked away, closely followed by the rest of the family. Our hour was up and it was time to head back down the mountain and leave Agashya and his family in peace once more … 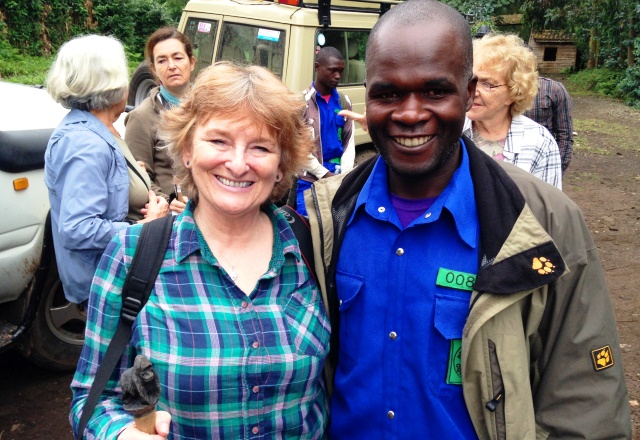 Saying goodbye to our guides and Jean was very emotional. They had enabled me to get really close to mountain gorillas in Rwanda, a wildlife experience unlike any other, and one I will cherish for the rest of my days …

I stayed at the Mountain Gorilla View Lodge in Volcanoes National Park, north Rwanda. Thanks to all the staff for their hospitality and for the hot water bottles and fire in the hut each night; most welcome! Grateful thanks to Uber Luxe Safaris and our guides Patrick and Brian for the trip of a lifetime. If you’d like see mountain gorillas in Rwanda and explore this beautiful country, find out more with Uber Luxe Safaris here. You can also follow them on Facebook and Twitter. 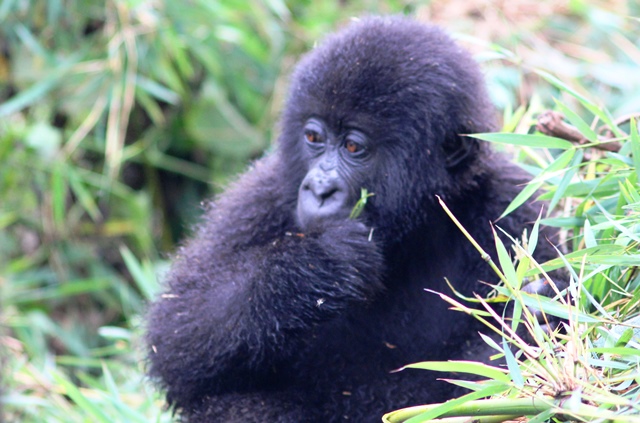 Many thanks to fellow traveller David Craig for his photos from our time with the gorillas and to photographer Clare Malley for help editing my photos. You can read her invaluable Travel Photography Tips here.

Things to See and Do in Rwanda 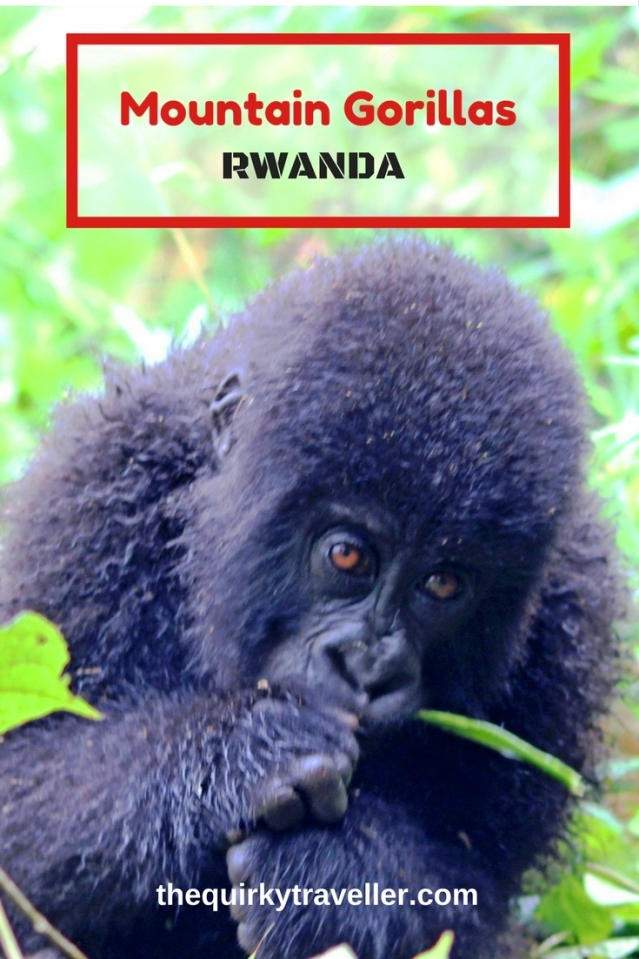 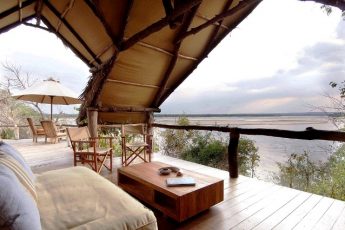