Mythically magical Corfu and My Family and Other Animals 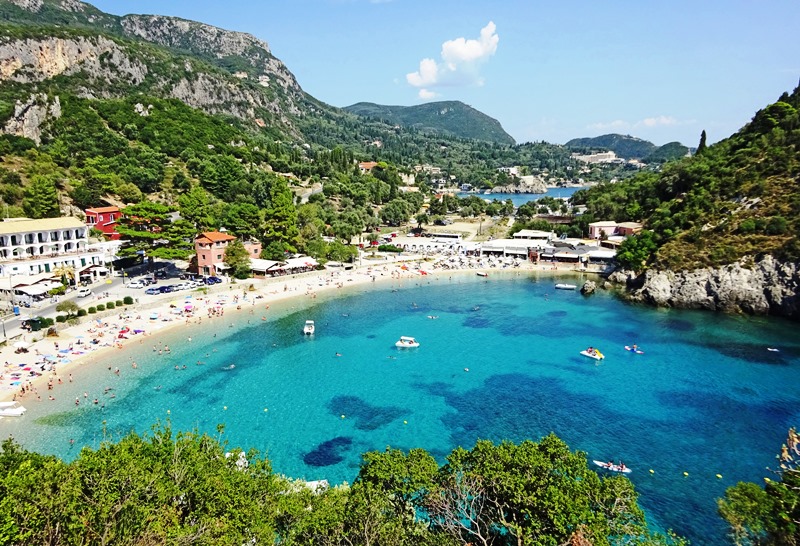 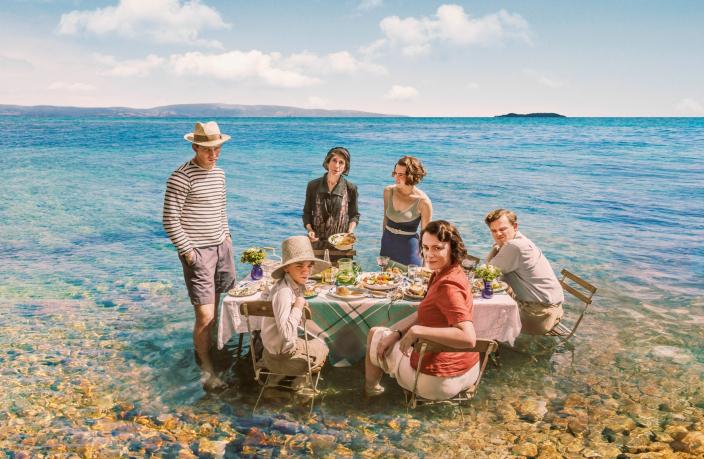 Once upon a time a quirky young woman took her second trip abroad to a far off island full of myths, literary links, bosky olive groves and men called Spiro.  She’d first read about this island in a funny book called ‘My Family and Other Animals’  by Gerald Durrell, a famous animal conservationist who’d had a VERY unusual upbringing on this isle, with his brother Larry and others.  Our quirky traveller then read as much as she could about Corfu, falling in love with its charms long before she was able to see it for real.

“A Greekish isle and the most pleasant place that ever our eyes beheld – this island would be the place where we would wish to end our lives.” His Persian Adventure Anthony Sherley  1601

According to Greek mythology, “Poseidon fell in love with the beautiful nymph Korkyra and abducted her (those Greek gods did a lot of abducting…) and brought her to an unnamed island.  In marital bliss he offered her name to the place: Korkyra, which gradually evolved to Kerkyra and in English Corfu.  The island was ruled by the Venetians for many years; Italianate architecture can be seen in many of the buildings and there’s a definite air about the place that is not totally Greek.” 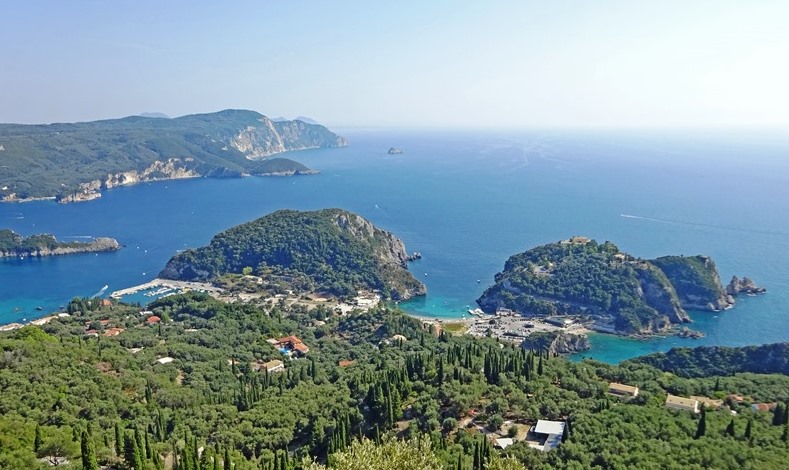 Another, not less speculative, line of quirky reasoning has suggested that Corfu is the site which (perhaps by mad hearsay) Shakespeare chose for his last play The Tempest.  One of the magical things about The Tempest is the way the atmosphere of the island is experienced and conveyed by shipwrecked souls when they come ashore. You will realise that this is exactly what happened to the conquerors when they landed here – they fell asleep.

My Family & Other Animals Gerald Durrell 1956

“Before us lay the island, the mountains as though sleeping beneath a crumpled blanket of brown, the folds stained with the green of olive groves.  Along the shore curved beaches as white as tusks among the tottering cities of brilliant gold, red and white rocks.” 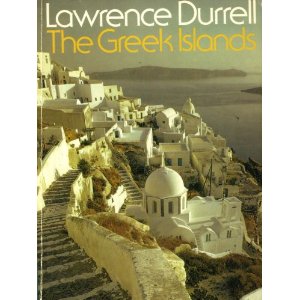 “In 1864 the British ceded the island to the newly born Greek kingdom.  As for what they left behind, the cricket comes upon one as rather a shock – the noble sweep of [Corfu Town] main Esplanade with its tall calm trees, suddenly transformed into an English cricket field, though the pitch is one of coconut matting.  Under the charmed and astonished eye of the visitor a marquee is run up and two teams dressed in white take possession of the ground.  It is highly professional and would do justice to Lord’s.” 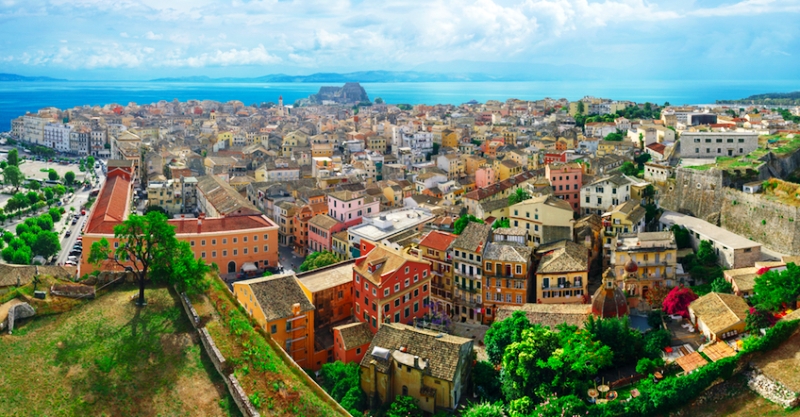 “The architecture of the town is Venetian; the houses above the old port are built up elegantly in slim tiers with narrow alleys and colonnades running up between them; red, yellow, pink, umber – a jumble of pastel shades which the moonlight transforms to a dazzling white city built for a wedding cake.” 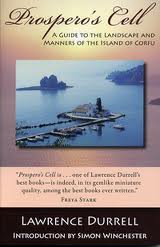 “Above me, leaking from the heart of the cliff, runs sweet water, down a shallow lip of maidenhair into a sand-bowl; further to the left a mysterious spring rises in the very sand itself with regular gushes, as if from some severed artery in the earth. Clear and cold, the water plays with the regularity of a clock.  It is the sweetest of island waters, because it tastes of nothing but warm afternoons, the breath of cicadas, the idle winds crisping as little corners of the inert sea, which stretches away towards Africa, death-blue and timeless …” 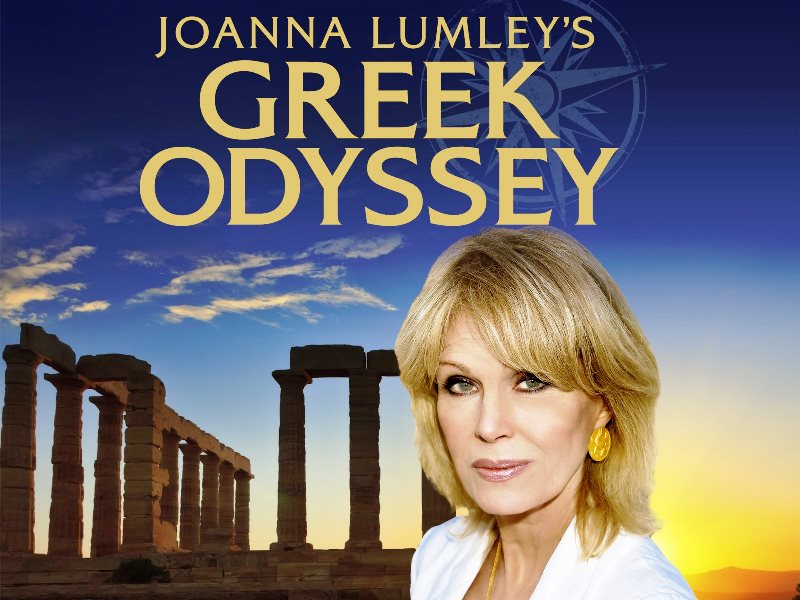 Joanna Lumley, in her ITV series Greek Odyssey, certainly seemed charmed and astonished watching a cricket match, not only at the size of the ground but also that every Greek player seemed to be named after St Spiridion, Corfu’s patron saint.  She also discovered another legacy of the British – the brass bands which march through the city at the drop of a tambourine â€¦

When our quirky traveller finally made it to magical Corfu, the island was lovelier than she had ever imagined …  the sea seamlessly slipping from turquoise to lime green to deep blue, silky soft sand, the smell of scrubby crushed thyme,  the deafening silver green heat of midday in an ancient olive grove, bouzouki music and crashing plates in a simple tavern, barbequed lamb and rosemary on a spit, the phut phutting of a rickety scooter,  olive-oily luke warm moussaka that somehow tasted of Greece. One day she wandered through overgrown vineyards, scrambled down a steep and pitted rock face and eventually found the secret little beach with its delicate waterfall that Lawrence Durrell had told her of all those years ago when she was a dreaming child.

Today  you can still find a little piece of magic away from the madding crowds if you look carefully.  (The secret little beach now has a road down to it so you may have to share that ‘sweet water’ with just a few others now!) 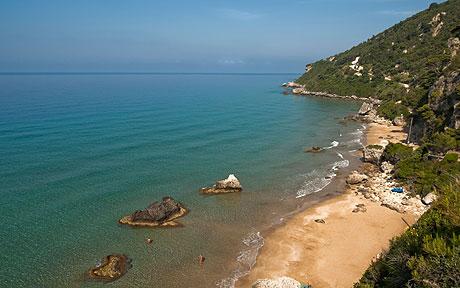 The Rough Guide to The Titanic