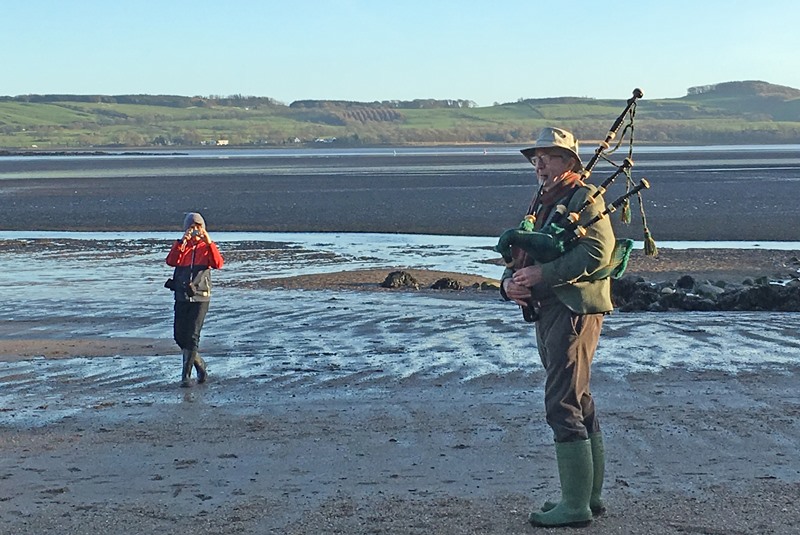 The piper walked slowly across the sand, bagpipes clasped under his arm, the sun glinting off the water as the haunting sound of the Skye Boat Song drifted across the bay. New Year’s Day on Dhoon Beach in Dumfries and Galloway. I couldn’t think of anywhere else I’d rather be. I was staying at The Selkirk Arms in Kirkcudbright for a Hogmanay Break. Here’s an outline of a very special few days refreshing mind, body and spirit in southern Scotland.

Being single at this time, I had decided to go away on a solo break, wanting to experience New Year in beautiful surroundings, where I wouldn’t feel too out of place on my own. After some research and help from VisitScotland, I’d settled on The Selkirk Arms; their Hogmanay Package looked ideal, with its a combination of fine dining experiences, Gala Dinner, some fun activities and a relaxing atmosphere. It only took me two hours to drive from Carnforth in north Lancashire up the M6 across the Scottish border and along the A75 to Kirkcudbright. The hotel, an elegant 18th century inn, is in the heart of the old town, and the warm welcome I received from owner Chris Walker and General Manager Joanna Scott, plus mulled wine and festive bakes in the Wee Bar, augured well for my stay.

Scottish poet Robert Burns stayed here a number of times around 1794. There’s a story that he MAY have written The Selkirk Grace (given at Burns Suppers on January 25th) in this very hotel before going to dinner hosted by the Earl of Selkirk at his home on St Mary’s Isle. The Burns Lounge celebrates this connection.

My first floor ensuite bedroom was cosy with a very comfy bed. On the side table was a miniature bottle of Hills and Harbour gin, some chocolates in the shape of a Highland Cow and an itinerary for the coming few days.

I quickly unpacked and set off for a walk around the town. Kirkcudbright (pronounced kir-coo-bree,) 10 miles from Castle Douglas, sits on the banks of the River Dee and is the only town on the Solway coast with a working harbour. The fishing fleet was in for the Christmas holidays and made a lovely sight as the sun was going down.

It’s an attractive town with a colourful blend of medieval, Georgian and Victorian buildings plus independent shops and art galleries. Kirkcudbright became a magnet for Scottish artists in the late 19th century and is now known as The Artists’ Town because of this association. MacLellan’s Castle is a ruined 16th century tower house (currently being restored) by the harbourside and nearby is Broughton House, a smart Georgian townhouse, once the home of renowned Scottish artist Edward Hornel. On my way back to the hotel I came across an enormous wicker unicorn; a quirky sight in a charming town.

That evening, I was given a table in the corner of the Restaurant, from where I could see all the other diners but not feel too visibile on my own. The hotel was full; many of the guests return annually for this Hogmanay break. For dinner I chose Missie’s Thai Fishcakes followed by Roast Guinea Fowl Breast with wild mushroom & thyme gnocchi accompanied by a very fine bottle of Bordeaux. Dessert was Dark Chocolate & Pecan Brownie – all excellent.

Chris had arranged for Warren and Esther of Galloway Cycling Holidays, to show me more of the area. First stop was a large cemetary above the town, where we saw the grave of local reprobate William Marshall aka The King of the Gypsies, who apparently died aged 120. In the nearby woods they showed me how to make tea using a Kelly Kettle, cotton wool, petroleum jelly and a flint. Red squirrels skittered around the trees close by. Later we walked up onto the hills overlooking the Solway Firth to find ancient Cup and Ring rock art; their meaning is still unknown. It was a fascinating day out with Warren and Esther, very friendly, highly knowledgeable guides who clearly love this part of the world.

The highlight of my stay was the New Year’s Eve Gala Dinner. It was everything I could have wished for, and more. First off was a Champagne Reception in the Lounge Bar where bubbly flowed, canapes circulated and kilts dominated. It was a delight to see so many people wearing their tartans and smart evening dress. I met up with fellow diners, including Kaaren Brook of Coaching on Call, another professional coach, newly engaged Ian, his fiance Louise and hotel owner Sue Walker.

The dining tables were beautifully decorated and we soon discovered that Sue was a whizz at sending squealing balloons flying off around the restaurant. The Taste of Galloway‘ menu was a treasure trove of local and traditional treats cooked with flair and presented in sophisticated style. The dainty amuse bouche redefined haggis, neeps and tatties. Scottish smoked salmon with lime mascarpone, Cock-a-Leekie Soup, Gressingham Duck and a divine Tipsy Laird Trifle were all sublime. A hilarious game of ‘Tattie Rolling got us all cheering and local musician Pete Kirk entertained us with a selection of lively tunes. We danced til midnight when a piper entered the restaurant to pipe in 2019. A whisky nightcap and then it was bed, exhausted but VERY happy.

Somewhat recklessly, I had agreed to meet Warren and Esther for a bike ride on New Year’s Day … Luckily, I was feeling fine, the sun was shining and I was on an electric bike, (see article on my Electric Bike Ride around the Furness Peninsula) which I love. We cycled out of town along the banks of the River Dee. It was sheer joy to be out in the fresh air, cycling on deserted roads through glorious scenery.

Warren and Esther were very patient, cycling at my pace and happily stopping for photos en route. We went up to Brighouse Bay, where we had a cuppa and enjoyed the view. From there we went to Dhoon Beach to join local artists celebrating the New Year with a bonfire, BBQ and the piper.

On Warrren and Esther’s recommendation, I ended the day visiting Cairnholy, a neolithic burial sight overlooking the Irish Sea and the Isle of Man. Dinner that night was another culinary treat, the highlight being locally caught ‘curry crust’ scallops followed by slow-cooked lamb rump and crisply gooey fresh fruit pavlova. I dined with companions from the previous night and felt like I’d made some very special new friends.

After a full Scottish Breakfast including haggis and potato cakes (plus bubbly on New Year’s Day), I said goodbye to Chris, Sue and their team. They’d made me so very welcome and at not point during my 3-night stay had I felt alone or uncomfortable. I’d satisfied mind, body and spirit in various ways, met lovely people, had great fun and discovered a beautiful part of the UK. I thought back to sunset the night before at Cairnholy and vowed to return very soon …

The Selkirk Arms offers a variety of holiday packages throughout the year, including their very popular Hogmanay Break. I’m delighted to announce that, following on from my visit, I will running a weekend Travel Writing Break (10th -12th May 2019) and I’d love you to join me. Click link for more info and booking details.

Many thanks to everyone at The Selkirk Arms for a wonderful stay in Kirkcudbright and to VisitScotland for hosting me. Find out about beautiful Dumfries and Galloway here. Follow the hashtag #seesouthscotland for more on this spectacular region.

The Isle of Man: Another Country 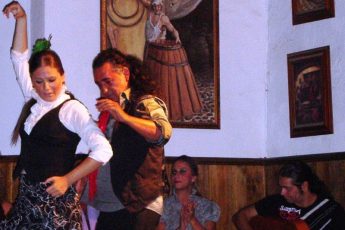 « Previous post
Quirky Travel Photo: Fofoti tree on Eagle Beach, Aruba in the Caribbean
Next post »
A poetic grumble about English Weather and why I love it