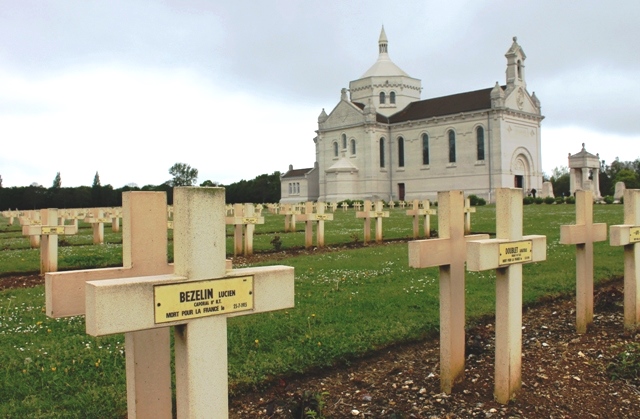 The plaque on the simple cross tells a tragic tale.  Two men sharing the same surname, both killed in war, but 25 years apart. 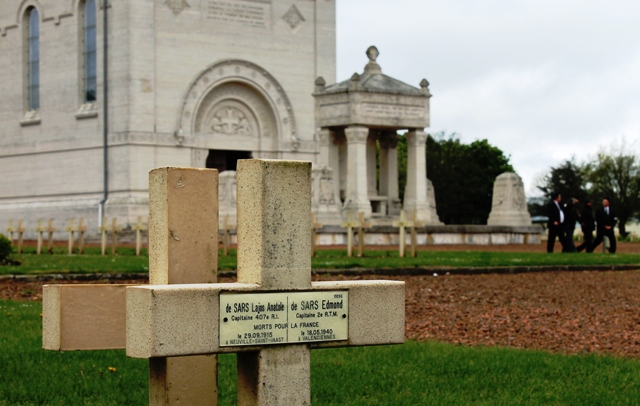 M de Sars senior died in World War One in 1915.  His son Edmond was killed in 1940 in World War Two.  Apparently this in the only cross in Notre Dame de Lorette Necropolis, the world’s largest French military cemetery with TWO name plaques.  The majority of the 20,000 graves and the remains of almost 22,000 unknown soldiers are from WW1 and the site is looked after by the Association des Gardes d’Honneur de NotreDame de Lorette. 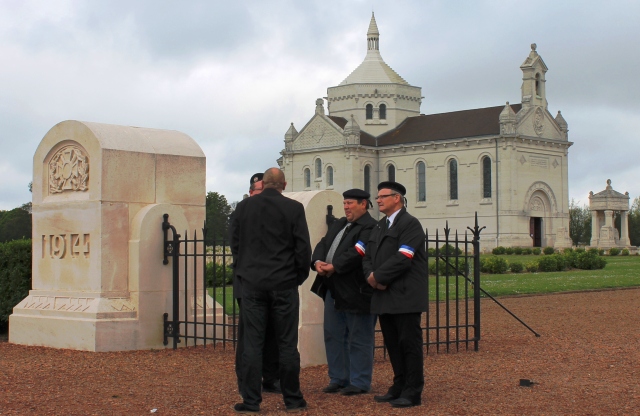 Our guide points out the battlefield where French troops where, in 1915, French troops tried to regain control of the Artois Hills from the German occupying force.  They failed at Vimy Ridge but managed to win back Lorette Spur, but with the loss of over 100,00 men.   We struggle to take in the enormous loss of life; the rigid lines of crosses fanning out across the cemetery somehow disconnected from the horrors that this area must have seen.  But that poignant double grave somehow makes it more real … 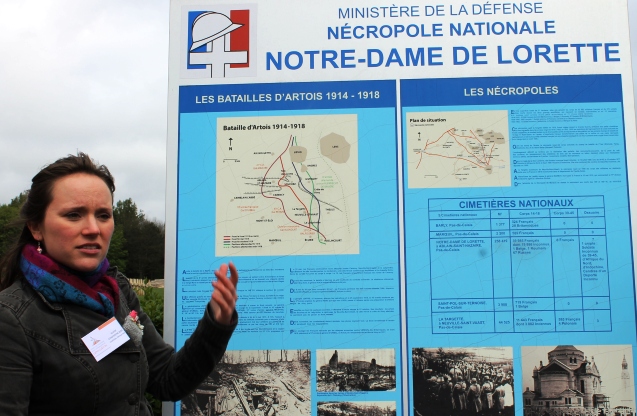 The sky is heavy with rain clouds but occasionally a glimmer of sunlight filters through, lighting up the marble chapel and impressive Lantern Tower, designed by French architect, Louis Cordonnier.  We make our way inside the church and are immediately struck by the enormous golden image of Christ, arms wide in welcome and blessing. 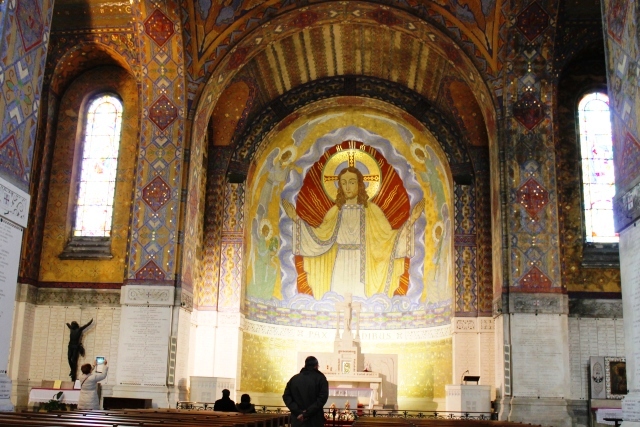 The walls are covered in names of the many soldiers who died, bringing home the mass slaughter of that ‘War to end all Wars’.  I find churches very tranquil places and this one, in spite of its size, somehow had an intimate feel and great beauty.  The mosaics add colour and contrast to the white marble – the angular elegance of blind Justice above the domed ceiling looks both modern and timeless. 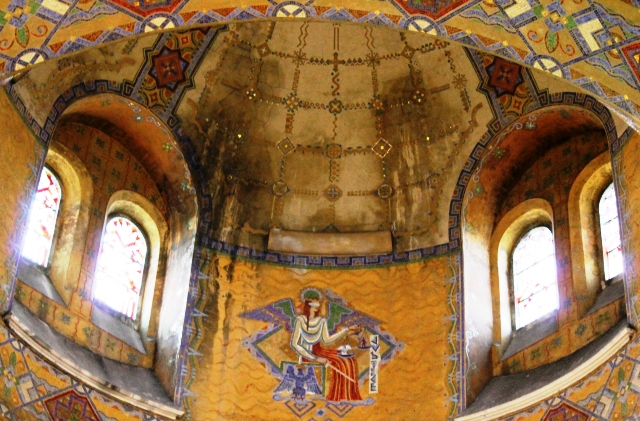 Outside in the cool spring air I see and elderly couple wandering through the columns, stopping every so often to read a name. Maybe they are looking for someone special, maybe they are just visiting like us, a place to see on a visit to WW1 sights in Northern France.  The day before we had been following in the footsteps of poet Wilfred Owen, who is buried at Ors Cemetery.  Notre-Dame de Lorette Necropolis is a sombre place, without the floral tributes that adorn the British cemeteries.  There’s a section for Jewish soldiers and also one for Muslims, with all the headstones facing Mecca.  Our guide shows us the 7 domed Ossuaries.  ‘They contain the remains of French servicemen brought into the cemetery from the Artois battlefields including single burials, burials in civilian cemeteries and small military burial site, within a radius of some 30 miles of Ablain St. Nazaire. The ossuaries are named after military commanders.’ 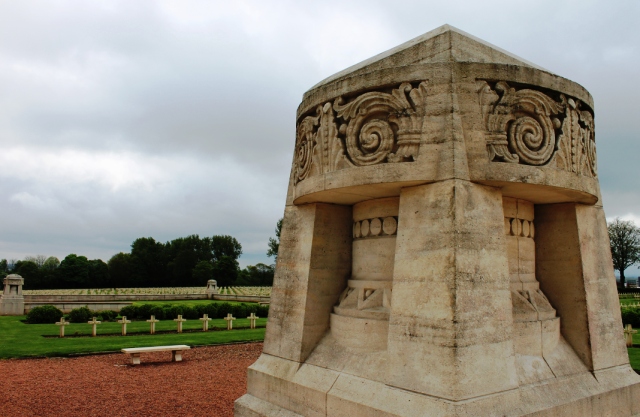 We admire the Lantern Tower and we learn that it really is a lighthouse; each night a beam sweeps across the cemetery, lighting up the surrounding countryside for a brief moment.  It’s 150′ high with 200 steps, though the public is no longer allowed to go to the top. 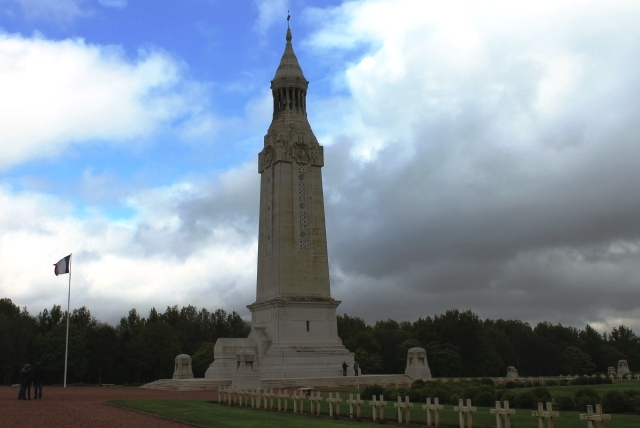 We go inside and I am somewhat shocked to see rows of coffins lying in front of us.  The bodies of 38 soldiers lie in this Chapel of Rest plus the remains of 6,000 others. We then climb up to a small museum where more Honour Guards tell visitors some of the history of the artefacts.  A book with a bullet hole through a corner intrigues – did its owner survive or not? A lovely Madonna and Child from the original Chapel, destroyed in 1794, sits somewhat incongruously atop a building upheld by angels, next to a battered statue, a bell, a helmet and other objects recovered from the battlefield. 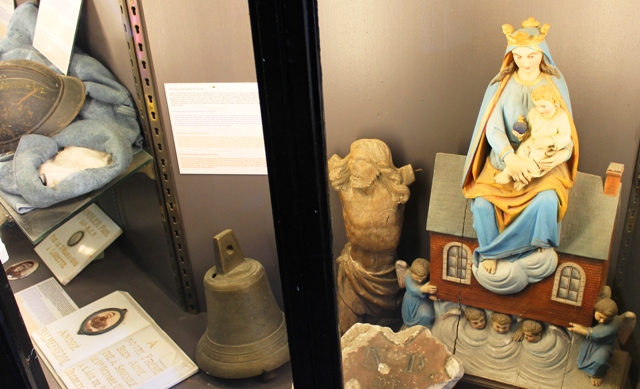 We leave the cemetery and cross to an area overlooking tranquil French countryside, with bright yellow fields of rape – and Vimy Ridge.  From here it is easy to see why this place was of such strategic importance.  We are told that in over the next few months a memorial is being built here to commemorate WW1 and hopefully remind all who see it, not only of those who died, but also of a more peaceful times in this country today.

I travelled to France by courtesy of Northern France Tourism. I stayed in historic Arras and spent the weekend with a group of travel writers exploring the many sights to see in this part of France.  If you get the chance, do visit – it brings history to life in a way that books, documentaries and photos fail to do.

The Battle of Arras and Wellington Quarry 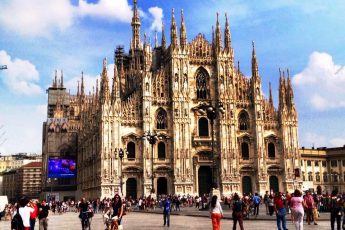 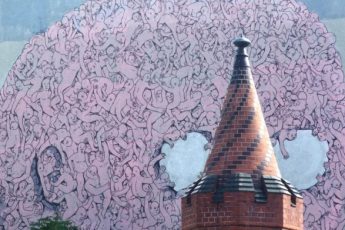 An Ideal Weekend in Berlin 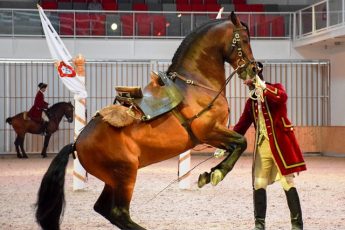 Quirky things to do in Lisbon, the must-see capital of Portugal