Having hysterics at the Olympic Bob Run in St Moritz 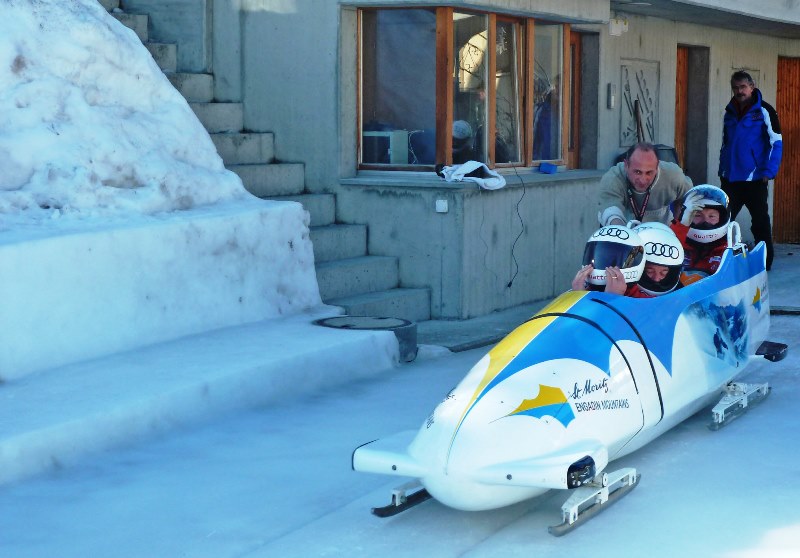 For those of a certain age, St Moritz is synonymous with the uber-cool jet-setters of the Swinging Sixties. Renowned playboy Gunter Sachs epitomised this hedonistic era when he married French pin-up movie star Brigitte Bardot. and made Switzerland their winter playground. The Gunter Sachs Lodge and The Dracula Club, overlooking the Olympic Bob Run course, are where people still go to see and be seen. 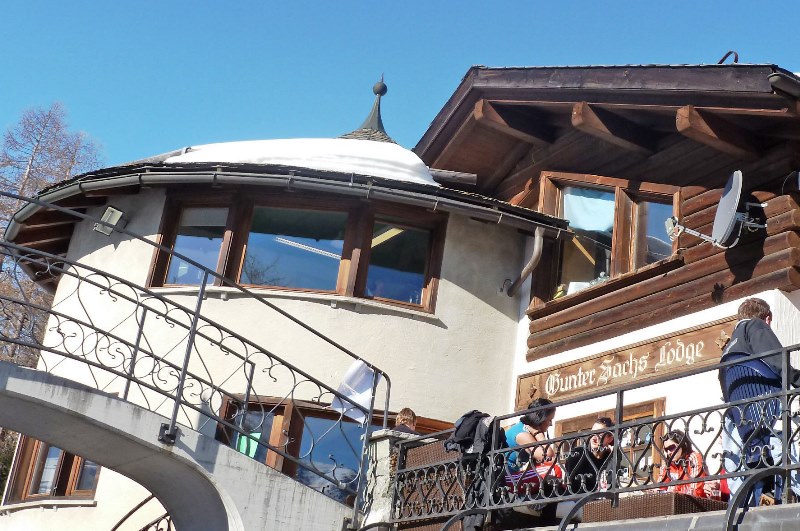 When you’re in one of the most sophisticated winter sports venues in Europe, surrounded by what used to be called the ‘jet set’, you might feel slightly like a fish out of water. If, like me, you know you’re not ‘cool’ and this mileau is not your usual haunt, you may hope to blend into the background – and you most definitely don’t want to make a fool of yourself. Yet that is exactly what I managed to do on a visit to the Olympic Bob Run in St Moritz some years ago. 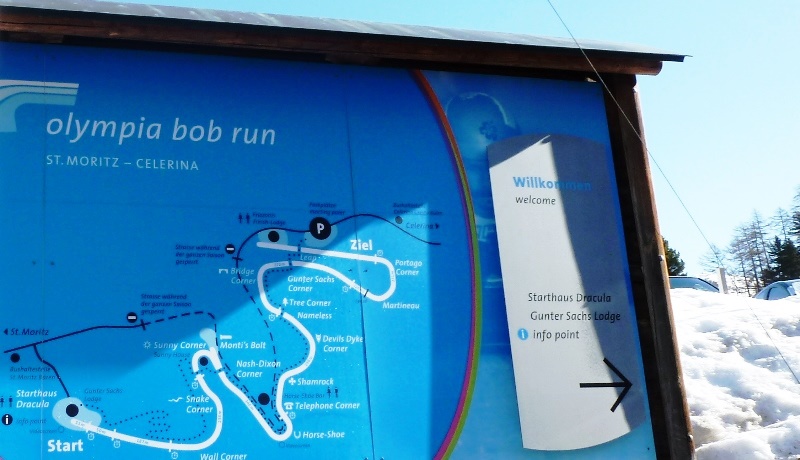 The St Moritz Olympic Bob Run is in the Engadin Valley, Switzerland. It’s the oldest bobsleigh track in the world and the only one that is natural refrigerated. It is also used for other sliding sports, including skeleton and luge. It was originally created for winter guests from Great Britain who invented the sport of bobsleigh running. In 1897, the St. Moritz Bobsleigh Club was established.  The track served as host to the bobsleigh events for both the 1928 and the 1948 Winter Olympics; this notice-board shows the some of the key dates in the Olympic Bob Run’s history. It’s now popular with both amateur and professional sports enthusiasts, as well as visitors from around the globe. 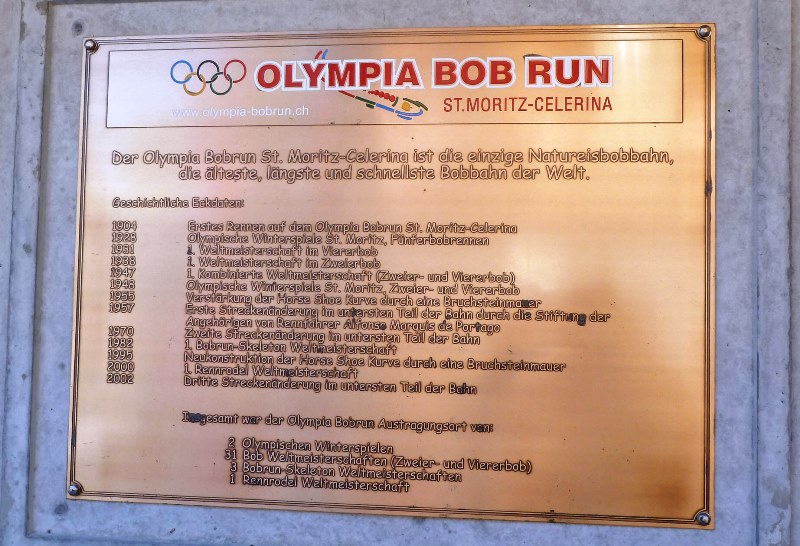 I was on a Railbookers train holiday to Switzerland. We’d arrived at St Moritz in style on the gloriously luxurious Glacier Express and been taken to the prestigious Olympic Club to have a look round. The place was a buzzing hive of testosterone, high-fashion and reflective sunglasses, mirroring the air of expensive danger, jovial bonhomie and general excitement. Men in tight-fitting jackets jammed protective helmets on their heads whilst photographers jostled for the best position to get the iconic shot. 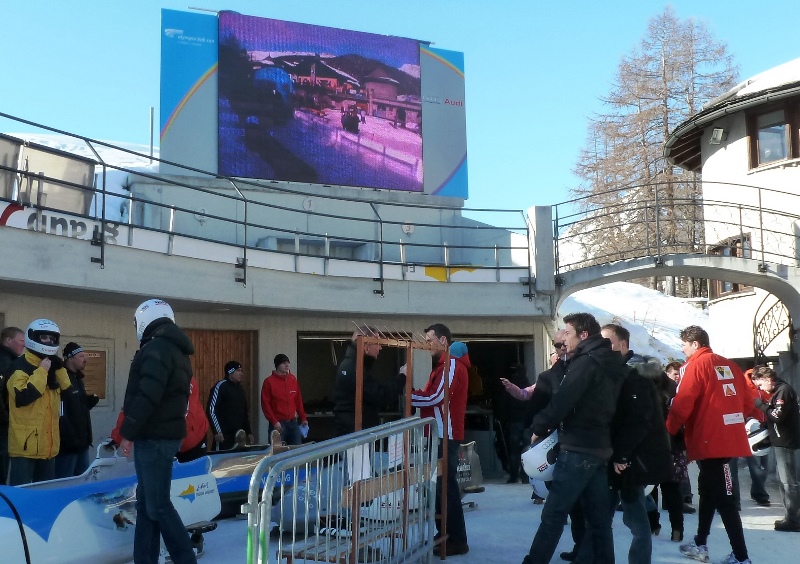 It was fascinating watching the participants setting off on their exhilarating bobsleigh run. Every few minutes two or three people crammed themselves into a metallic cylinder and were shoved off down the world’s only natural ice run, hurtling along 1722 metres of straights and round 14 named corners at speeds of up to 135 kph, and all over in about 75 seconds.

On the sunlit terraces a sophisticated murmur of polite chat chimed with champagne glasses chinking and beer glasses clinking. Pristine snow glistened in reflected sunshine; it looked like a glossy page from Vogue magazine … 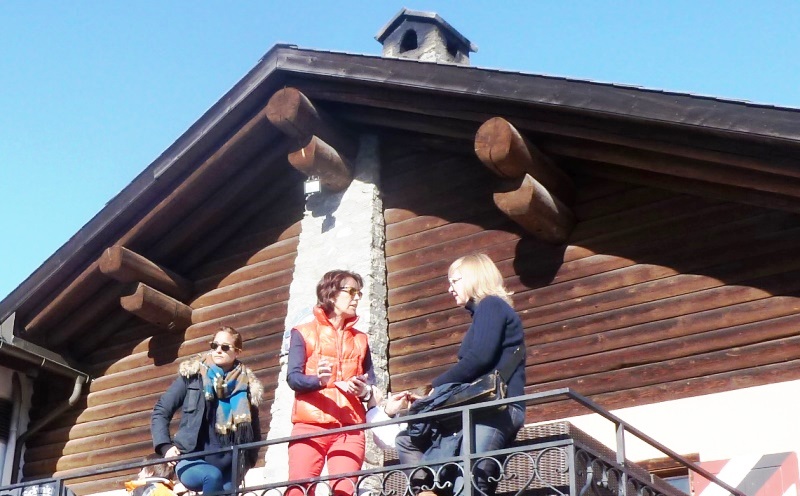 So it is with red-faced embarrassment that I recall my ignominious photo-shoot in these hallowed environs … In front of the Lodge, beside the Run was a bobsled and we were invited to have our photo taken. I got into the front position, sat back for my shot – and promptly disappeared down into the very nose of the bobsled.  And I couldn’t get out! All that was visible were my hands scrabbling to get a purchase on the slippery edge of the frame … 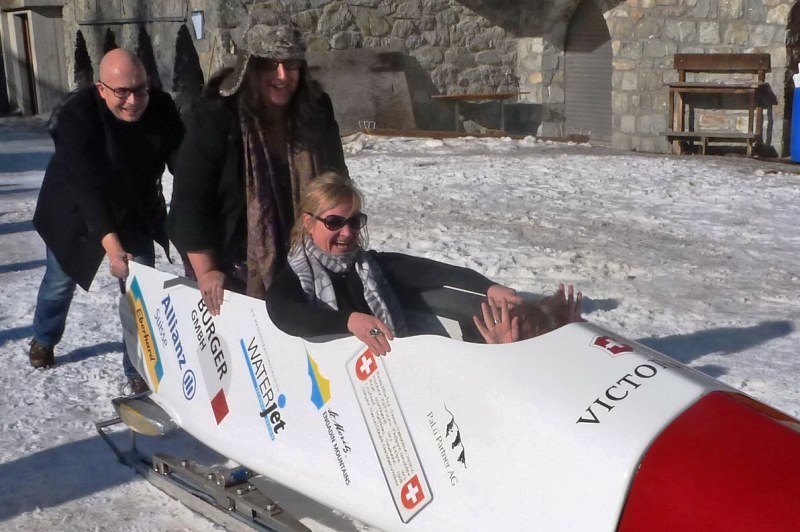 I got so weak giggling I was incapable of leveraging myself up. Instead of helping me out, my so-called friends – and also complete strangers – were either bent double laughing or taking pictures. Eventually, with the help of a couple of strapping sportsmen, I was hauled out, dusted off and able to pose properly for my photo. 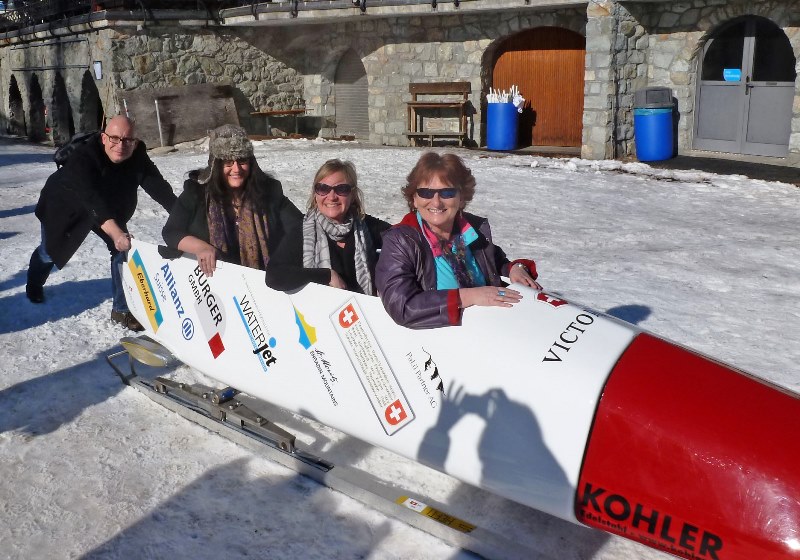 Having made an exhibition of ourselves with our ‘uncool’ hysterics, we left the club, me keeping my head down after my somewhat inelegant performance… 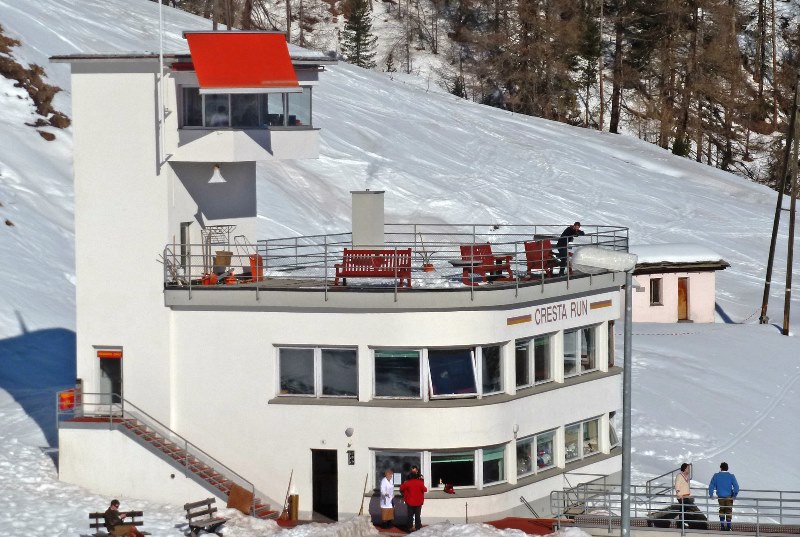 Not far from the Olympic Bob Run Club is another famous sporting venue of the Engadin region, the Cresta Run. Started in the winter season 1884/85, it’s a men-only ‘skeleton bob’ addictive adrenalin rush spiked with danger and adventure just inches off the frozen track. Look out for the lovely Cresta Rider scultpure by David Wynne. 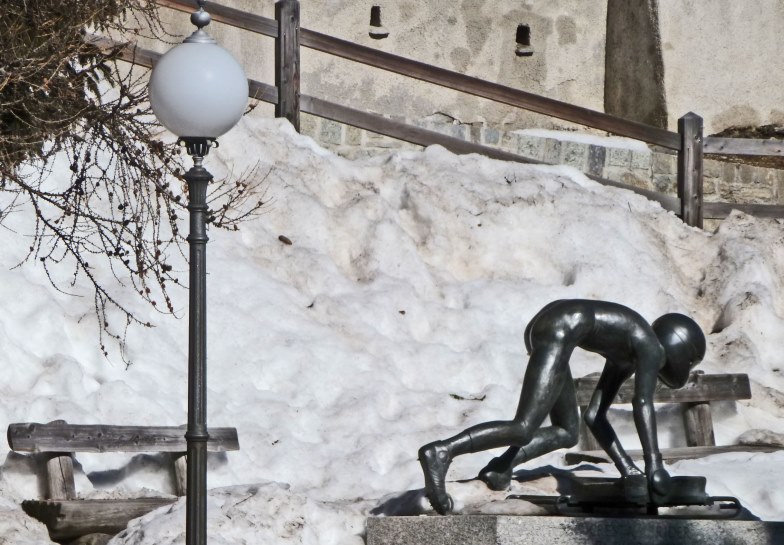 The wording beneath the sculture reads:

Presented to people of St Moritz by the St Moritz Toboganning Club to mark the centenary of the Cresta Run 1885 – 1985. 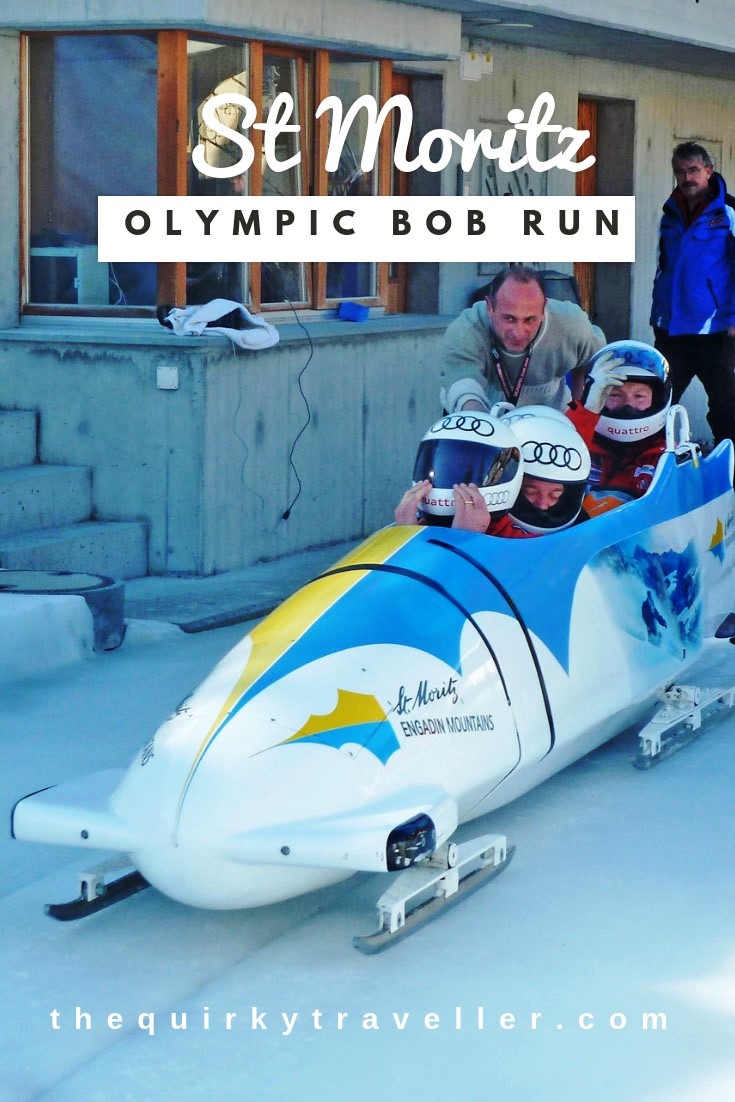 Discover a wealth of culture in Amsterdam 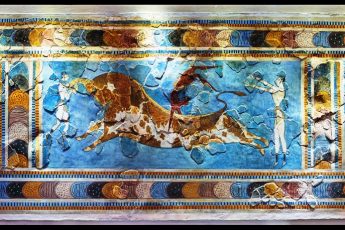 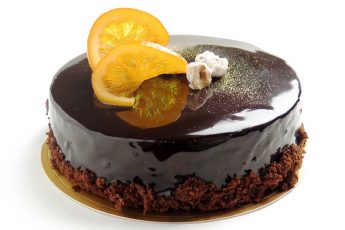 Top 10 most delicious cakes in Europe - and how to burn off those calories!