The May Day Padstow  ‘Obby ‘Oss (Hobby Horse) procession is the oldest of its kind in the country, possibly dating back thousands of years. Its actual origins are uncertain, but it has the hallmarks of an ancient fertility rite, marking the coming of summer.

There are two Padstow ‘Osses, one red and the other blue. The followers dress in white with either blue or red scarves and ribbons depending which Obby Oss they follow. The Red Oss, or Old Oss, is the original.  The Blue Oss was introduced in the 19th century and has links with the Temperance Movement and the Great War, after which it became known as the Peace Oss. 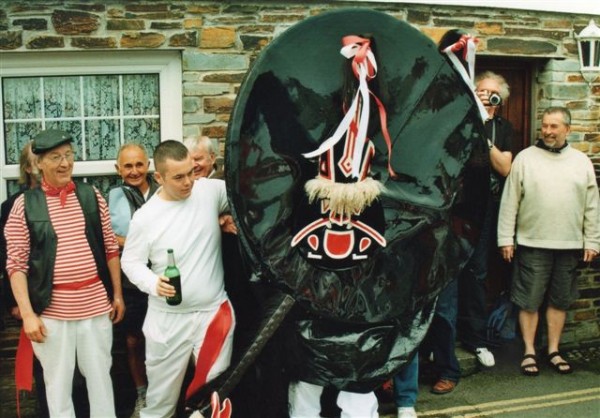 On the day, Padstow is decked in flags and greenery, and the Maypole in garlands. The Obby Oss itself is made of a wooden hoop, six feet in diameter, covered in sail cloth down to the ground and topped with a fearsome mask. Its coming is marked at midnight when the crowd gathers around the Golden Lion pub, home of the Old Oss and sings the Morning song, “Unite and unite, and let us all unite!”

The Blue Oss appears from its stable in Padstow Market Institute at 10am. The Master of Ceremonies, dressed in top hat and tails, emerges followed by the Oss’s followers who cry “Oss, Oss!”, the crowd replying, “Wee Oss!”, before the Blue Oss and its Teaser erupt from the stable.  The Followers perform the May song with drums and accordions, as the drama between the Oss and its Teaser are played out. At 11am, the Red Oss emerges from the Golden Lion, following the same ritual. Both make their separate way through the town with no definite set route. 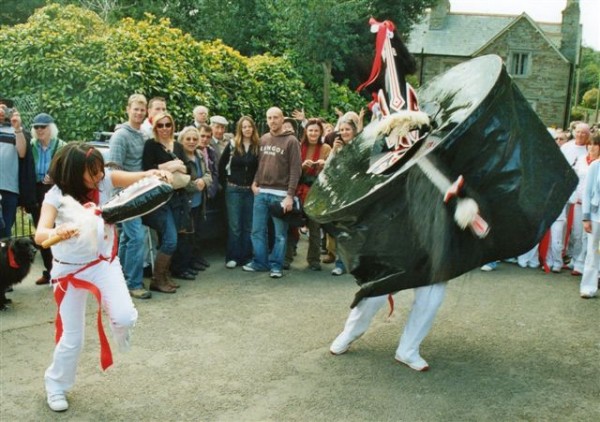 The rivalry between two Padstow Osses is friendly and they avoid one other until early evening, before meeting and dancing around the Maypole. At 9.30 the Peace Oss returns to its stable, not to be seen for another year. The Old Oss does the same an hour later. At the end of the day, the Oss is ritually done to death, marking the passing of the old year.

The meaning of the Obby Oss drama is subject to speculation. It is primarily a pagan ceremony that hopes for a fruitful harvest. The horse was always important in farming and transport, thus evolving pagan belief in horse magic. It is also believed if a woman is covered by the Oss during the chase, she will become fertile and fruitful; an idea that was further popularised in the film ‘The Wicker Man’. 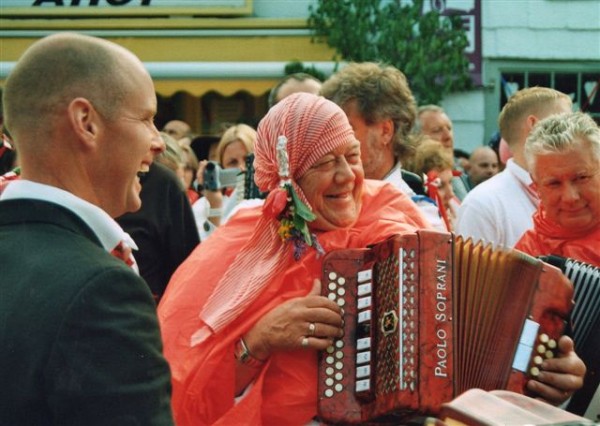 As Christianity took hold in ancient Britain, pagan ceremonies were either suppressed or rebranded as Christian, and the Oss was re-interpreted as the drama of St. St. George and the Dragon. The re-emergence of Paganism has enabled the ceremony to reclaim some of its original meaning and the lyrics of the May song now acknowledges both the pagan motifs and the Christian interpretations.  So make a May Day date with the Padstow ‘Obby ‘Oss and join in the some fun and frolics. Cala’me Bys Vyken! – May Day For Ever!

Barry McCann is a writer, editor and broadcaster, specialising in short stories, reviews, features, talks and, more recently, travel writing.  Barry is the editor of Parnassus, MENSA Art & Literature Journal and is currently Writer in Residence at BBC Radio Lancashire. Follow him on Face Book

If you enjoyed this article you may like to read another of Barry’s quirky posts Going Underground in Seattle and A Folklore Tour of the Lake District.

Festive treats at a traditional Christmas Market in Bavaria