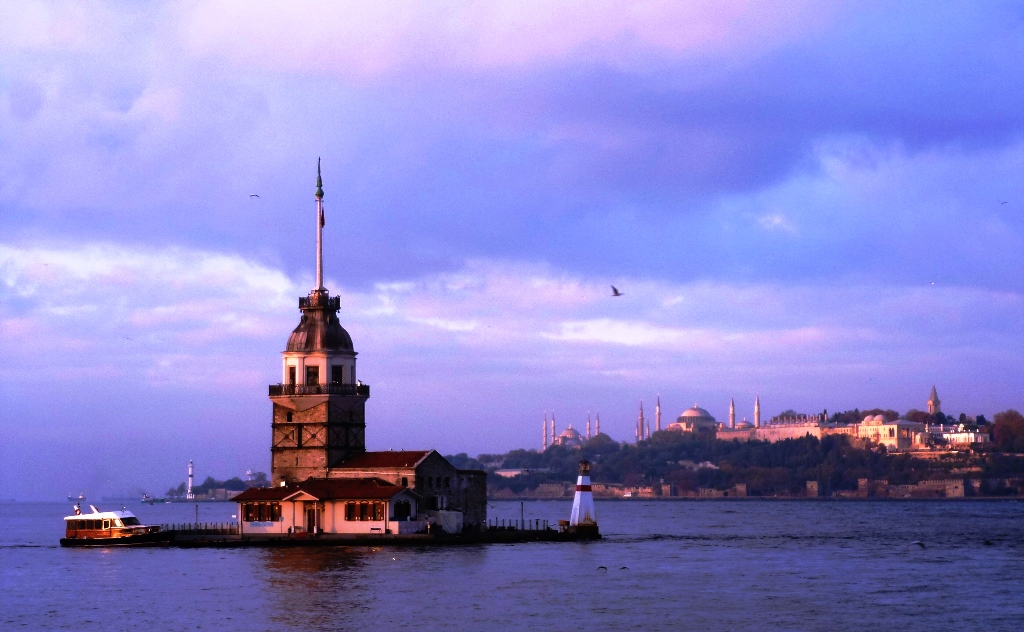 Watching the sun rise across the Bosphorus illuminating three of the best-known sites in Istanbul– the Sultan Ahmed Mosque (aka The Blue Mosque), Hagia Sophia (or Ayia Sofia) and Topkapi Palace was a joy. Pink and turquoise light bounced off the quaint little Maiden Tower as ferries, fishing boats and yachts wove their way around these historic waters …

I was on Celebrity Cruises uber-cool cruise ship  ‘Reflection’ and had got a morning to get a glimpse of Istanbul and Turkey’s heritage.  On a personal tour with informative guide Farouk, fellow travel blogger Elle Croft and I were first taken over to the Asia side for this lovely view of dawn across the water.  My advice for cruise passengers when visiting a place with plenty to see is either to take one of the many excellent Destination Tours which ensure you get to see a lot in comfort, or do what I did and just choose a few key places to visit.

My top 3 places to see in Istanbul 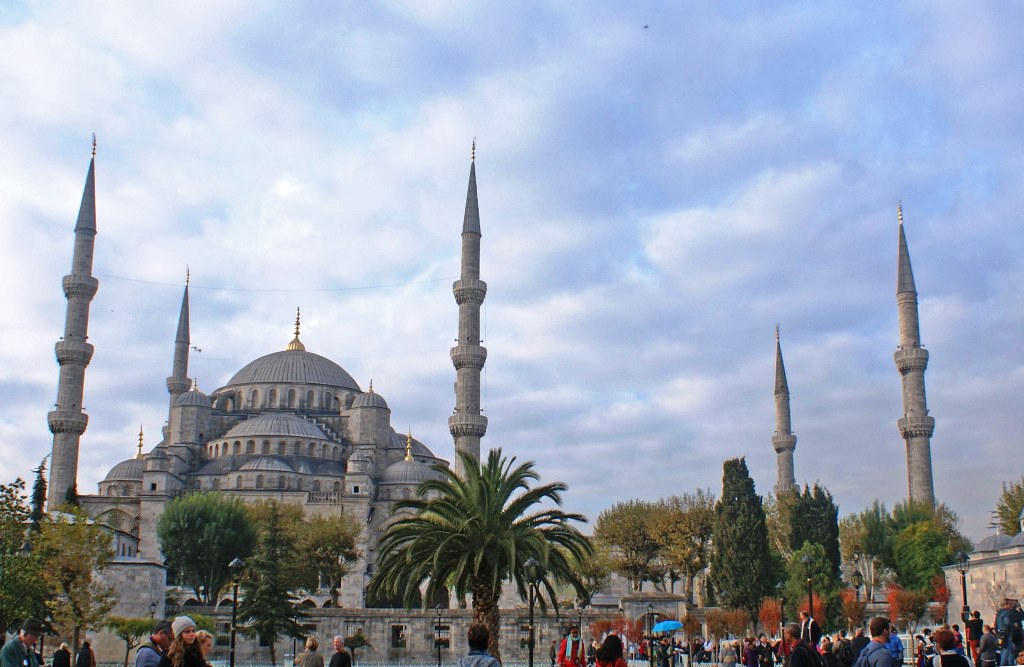 The Sultan Ahmed Mosque (also known as the Blue Mosque was built in the early 1600s on the orders of 19 year old Sultan Ahmed I.  It is actually a large complex of buildings including a school, hospital, a market, kitchens and a tomb.  Six pencil-slim minarets surround it and there are five daily services announced by a muezzin.  (Check times as it is closed during prayer.)  Its western name comes from the lovely blue Iznik (Nicae) tiles that decorate its interior walls. 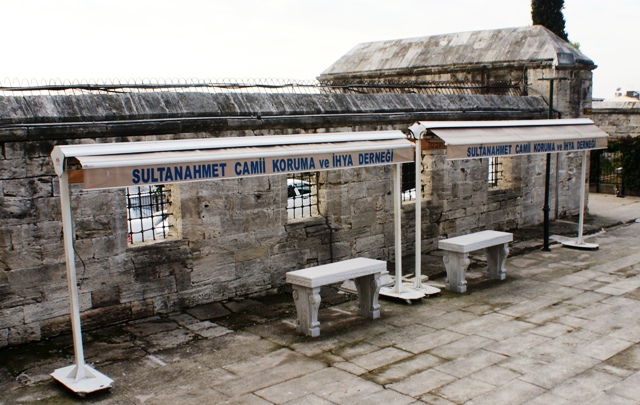 Farouk pointed out a couple of marble ‘tables’ outside the entrance, used for coffins at funerals.  Under an arcade are the taps for washing prior to prayers – it is a religious requirement to be clean in an area of prayer.  Before entering the main building we had to remove our shoes and carry them with us in little plastic bag. 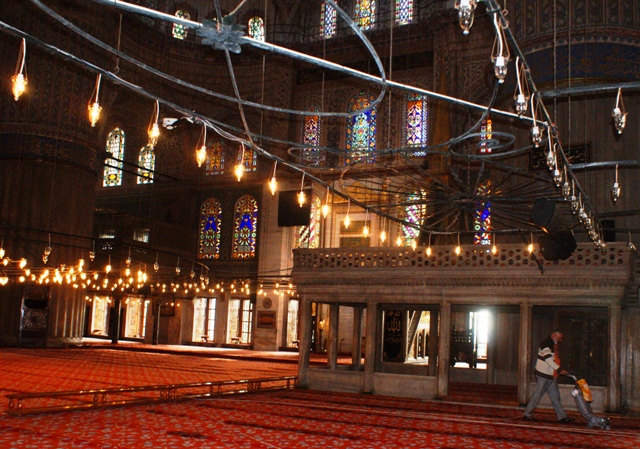 Entering the huge hall the first thing you notice are the many lights suspended from the central dome and the red carpet covering the whole floor space. It was being methodically cleaned by a guy wielding a very old-fashioned hoover – bet he’d have loved a Dyson!  Cordoned off is the Minber (pulpit), a decorative ‘staircase’ where the Imam delivers sermons. Farouk explained the significance of the Arabic calligraphy, mostly verses from the Quran and praise to Allah. The domed ceiling has exquisitely lovely tiling. 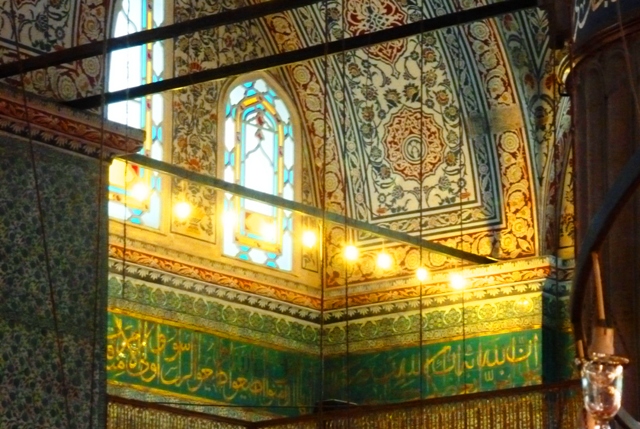 High above is the Hunkar Mahfili (Royal Box) where the Sultan and his family would pray, separate from the congregation in case of assassination attempts. In spite of the crowds jostling to get the best view, it was still possible to get a feeling of reverence and be impressed by the mosque’s architectural magnificence. 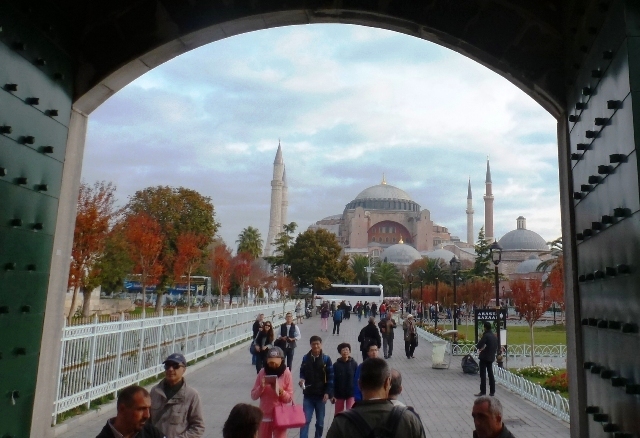 Hagia Sophia could be seen looming beyond a massive gateway, looking much as it did in the 6th century when it was built, as a Byzantine Orthodox Basilica .  Huge red stone buttresses shore up the walls and its four elegant minarets soar skyward into the heavens. 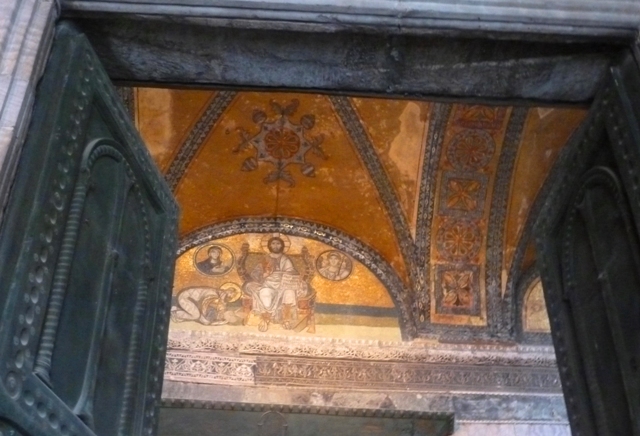 Having navigated the ticket queues and security devices we entered via the Imperial Door above which a gold-decorated mosaic depicts Emperor Leo VI bowing at Christ’s feet.  Shuffling slowly forward into the narthex (central hall) hundreds of lights and arched windows shed a mystical light all around. 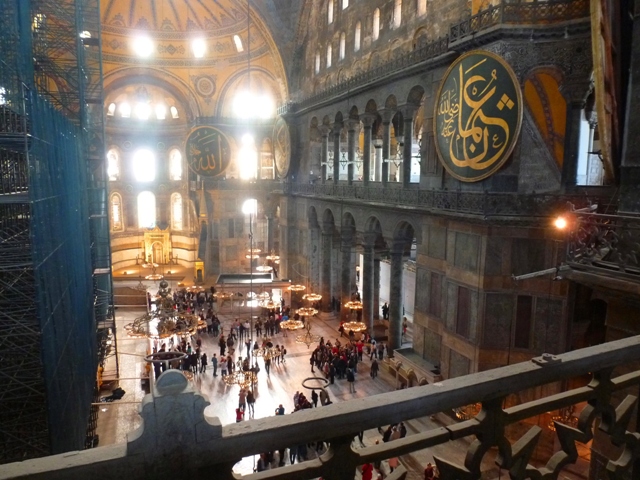 To the left, massive scaffolding rose to the ceiling; meticulous restoration work will take many years to complete.  Half way up the columns circular roundels have golden script proclaiming the Muslim era that went from 1453 . In 1935 the first President of Turkey, Mustafa Kemal Ataturk had Hagia Sophia converted in to a museum and was declared a UNESCO World Heritage Site in 1985. 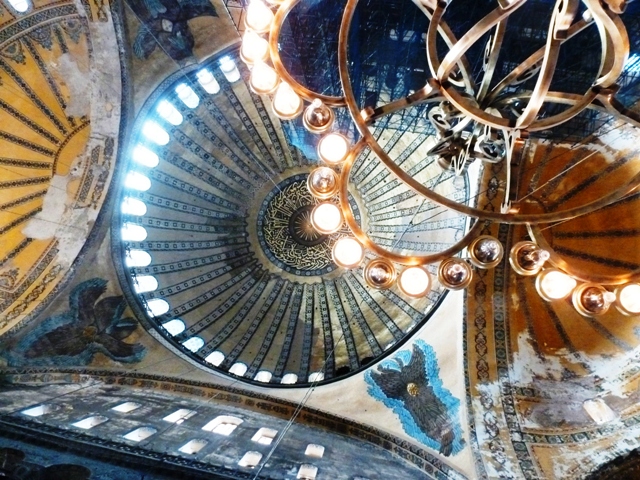 The enormous decorated dome is over 100 ft in diameter and about 55 feet high. I spent a long time simply gazing up and around at all the splendid features that dazzle and impress. Farouk showed me the four Seraphim – protective angels with 6 wings.  During the Ottoman period their faces were painted over but now one of Hagia Sophia’s angels has had a face-lift and once again gazes down on the thousands of visitors to this splendid edifice. 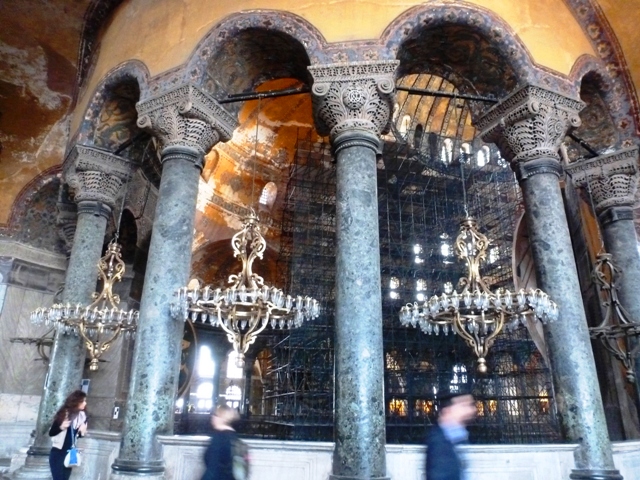 On the second gallery we got closer to the decorations, the roundels (wooden circles) and scaffolding, looking out from the Loge of the Empress. 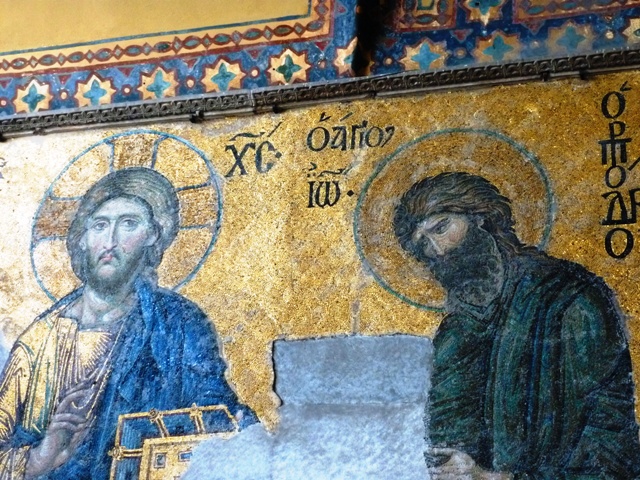 There are many delicate mosaics in gold and vibrant colour, including the 13th c Deesis showing the Virgin Mary, Saint John the Baptist and Christ with compassionate realism.  A security guard spent all his time saying â€œno flash, no flash’ as tourists tried to capture its emotional impact on camera. 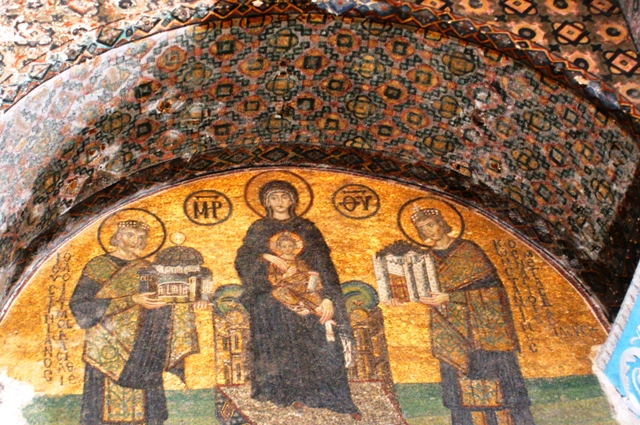 Exiting by the Southwest Vestibule we looked back to see another splendid mosaic of the Virgin Mary and Christ dating back to 944AD.  The previous night I had seen the building lit up against the Istanbul skyline – simply stunning. 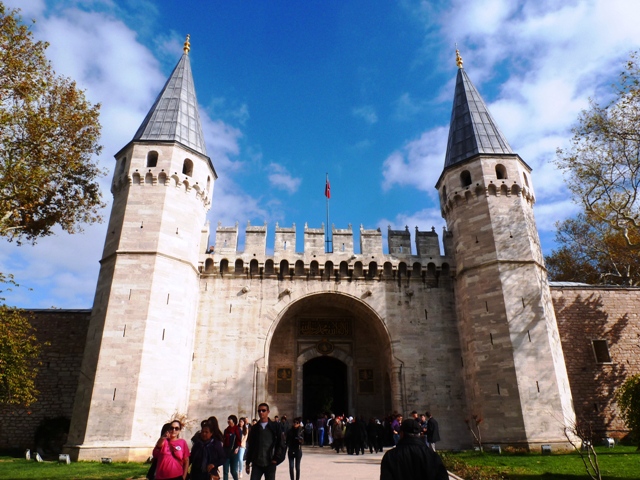 Topkapi Palace is a fairy-tale concoction of pavilions in four courtyards created by Mehmet II in the mid 1400s as his official residence and seat of government.  As we walked through the Gate of Salutations I was struck by the architecture – rather more European than Occidental, with its elaborate parapets and towers. 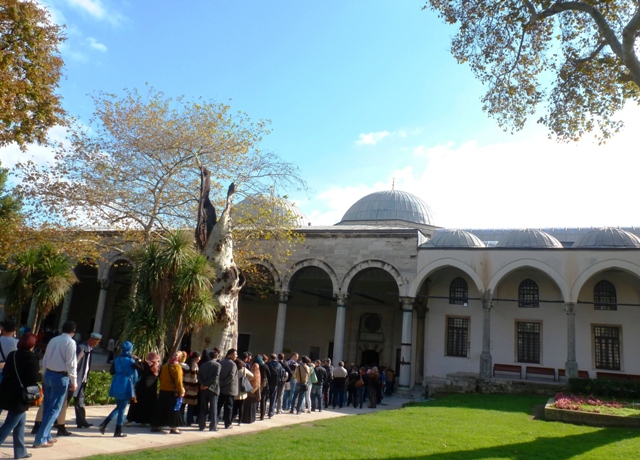 There is so much to see here and the lines waiting to go into the Throne Room and Treasury may be off-putting. However, the exhibits are well-worth queuing for including the priceless Peacock Throne, covered with gold and decorated with rubies, emeralds, and pearls.  The Topkapi Dagger (symbol of the Museum) is a curvaceously dainty piece of craftwork, embellished with three large emeralds.  I was entranced by a golden cradle and various jewel-littered objects demonstrating the incalculable wealth of the Ottoman Empire. (Photography not allowed inside but plenty of images on internet.) 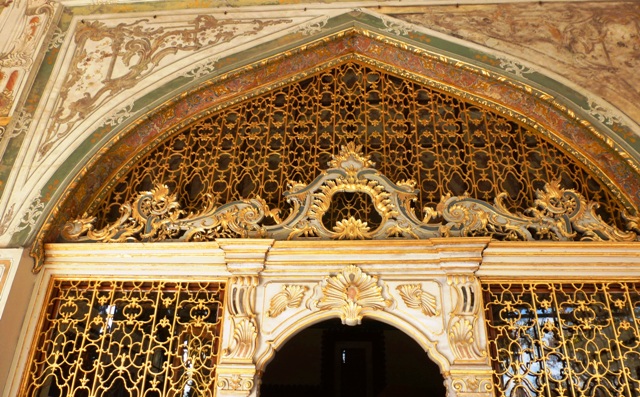 On this visit I didn’t have time to go into The Harem, but having been before I was happy to explore more of the elaborately tiled Exhibition Halls and pleasure domes built over many centuries. The Circumsion Room is far more attractive than its name implies, with recycled tiles, mother of pearl panels and pretty stained glass windows. 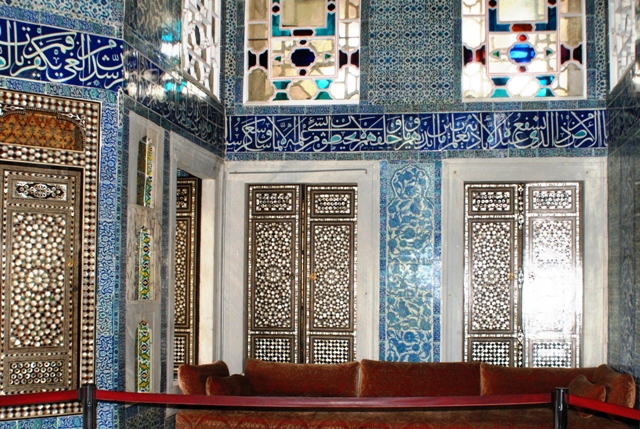 There’s a splendid display of wicked-looking weapons and in one area some highly sacred relics from the Prophet Mohammed.  The domed kitchens are open to the public as is the 19th century and a unique collection of sultans’ costumes. 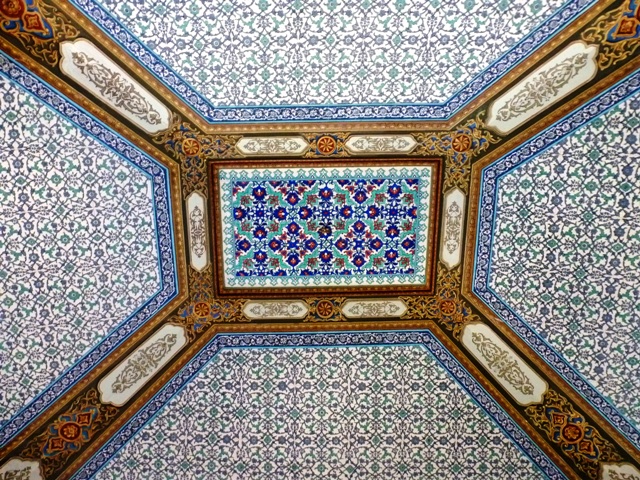 It was the lovely tiles and gilding on virtually every surface that entranced me.  I would have loved to spend a lot longer in this exotic treasure trove of artistic excellence and will most definitely return another time.

An hour later Elle and I were sipping champagne on the deck of Celebrity Reflection on the ‘Sail Away’, watching this beautiful Turkish scene slip slowly away as we headed off for Kusadasi and pastures ancient … A perfect end to a perfect day. 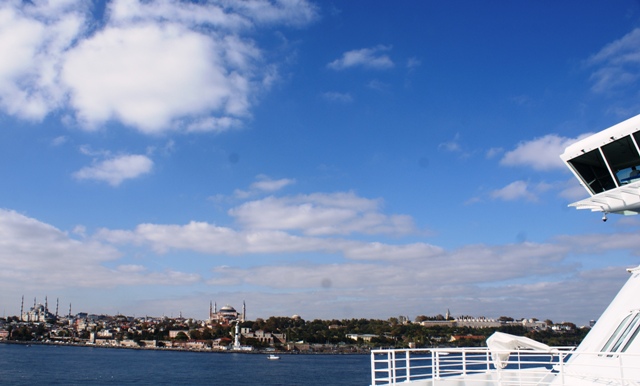 Many thanks to Celebrity Cruises UK for a really enjoyable cruise trip to some fascinating destinations.  As a relative newcomer to cruising, this cruise has given me an even great appetite for this unique way of travelling.  Read about my visit to the tranquil Greco-Roman site of Miletus here and the also the Greek Island of Mykonos.

Turkish Delight in Yalikavak on the Bodrum Peninsula 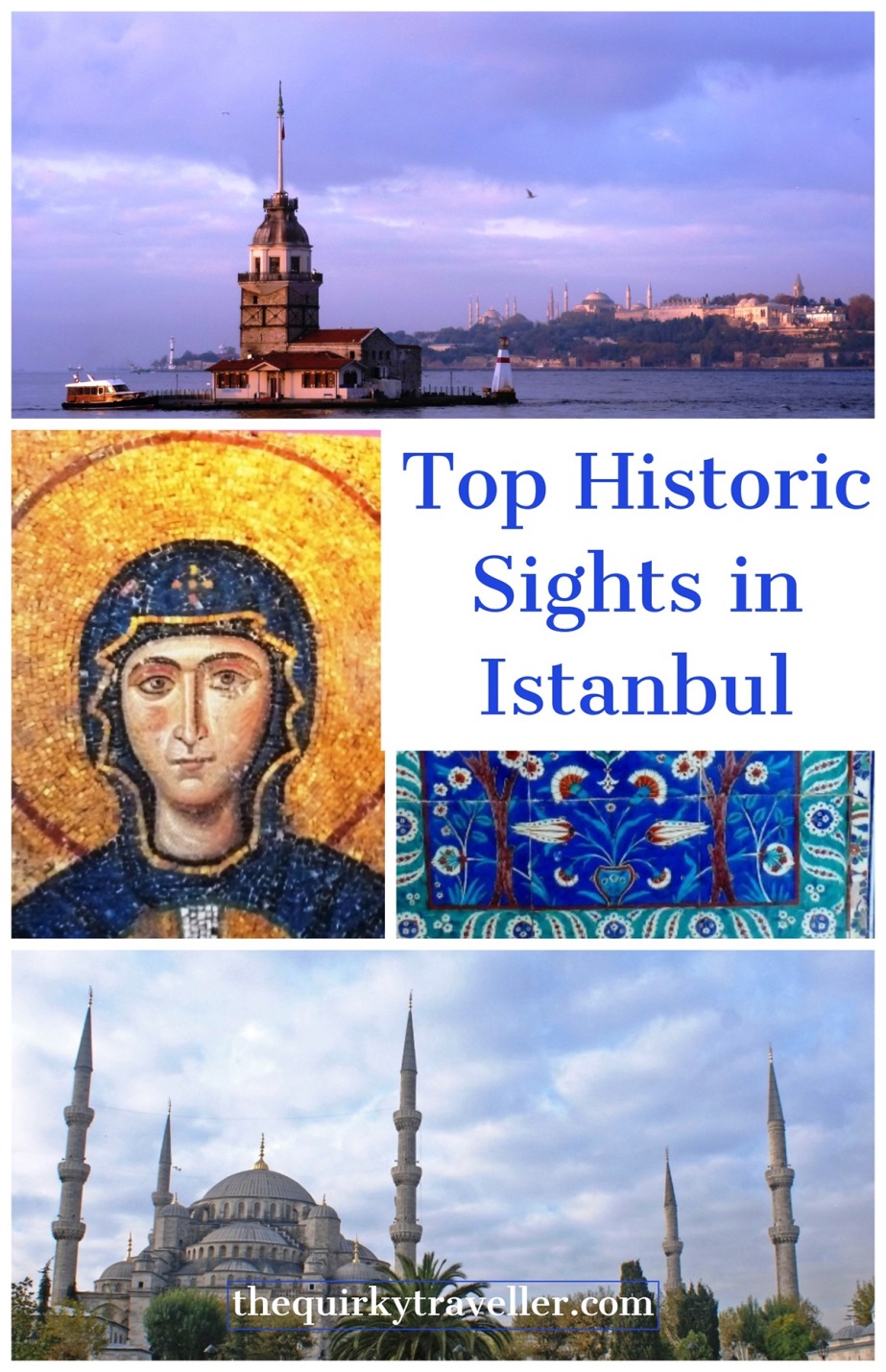 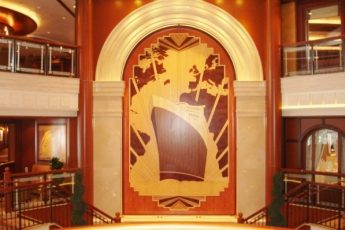