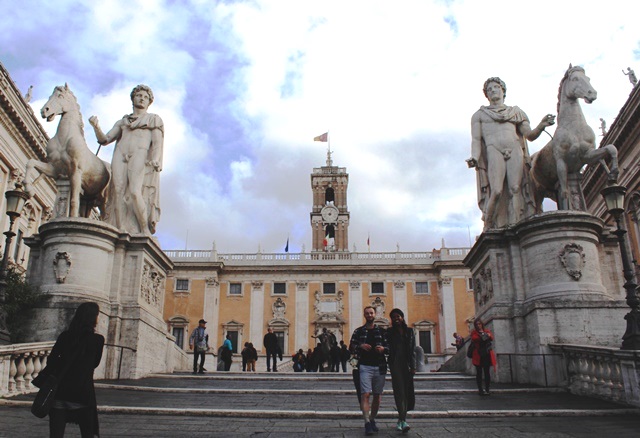 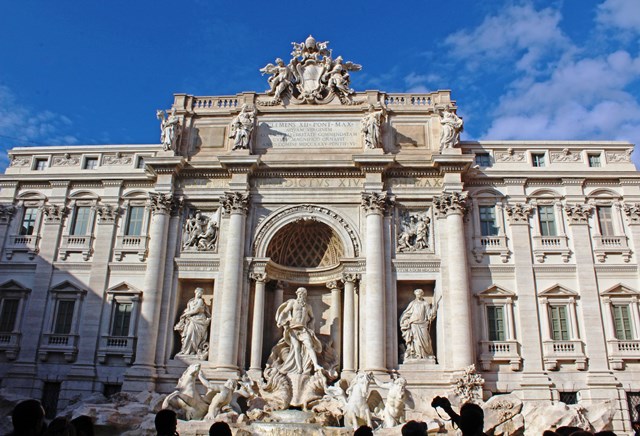 “It’s like travelling through history… The people are great, they’re very friendly, which makes a difference.” Dany, concierge for Citalia Holidays in Rome, was introducing me to his favourite city, sharing some top tips and insider secrets to help make my 48 hours in Rome a big success.

I’d never visited Rome before; it had been on my Dream Destination list for decades. Arriving mid-afternoon, I was picked up from the airport and whisked to The Ariston, a chic hotel very close to the railway station in the city centre. Here is my itinerary and suggestions for a truly memorable time in the Eternal City. NB: I didn’t go inside all of the sights so take that  into account in planning.

Take a bit of time to get your bearings. If you have a concierge, do use them or whoever is local, to get an idea of what is possible in a short stay. You’ll want to see the main sights, but be realistic. They are simply awe-inspiring and you may want to spend quite a time at each one. There are usually BIG QUEUES so it’s worth doing research and booking tours or tickets in advance. Public transport in Rome is not brilliant; the Metro only has two lines which barely touch the major sites. Trams and buses go all over the city but traffic often slows it down. 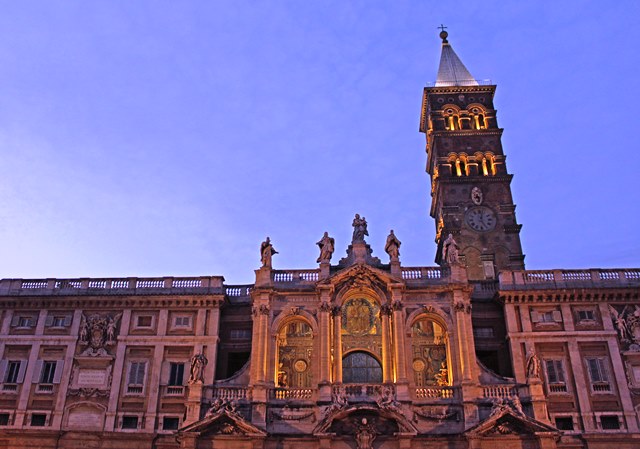 One of Rome’s greatest basilicas, Santa Maria Maggiore, is not far from the station and my hotel, so I walked up to see it. Its nave and splendid mosaics date back to the 5th Century AD. It towers over the busy piazza, and its ceiling is a stupendous gold avenue that showers light into its cavernous interior. There are some beautiful paintings and sculptures and beneath the alter is a crypt with a statue of a Pope and a crystal reliquary said to contain wood from the Holy Crib. St Jerome and the superb Italian sculptor Gian Lorenzo Bernini are buried here.

Italian Dinner and Rome by Night

A tour of Rome by night gives you a chance to see the city’s magnificent monuments lit up, giving a whole other perspective. I went on Gray Line’s ‘Panoramic Rome Bus Tour by Night with Traditional Dinner‘, with hotel pick-up and guide, Sandra, whose in-depth knowledge and enthusiasm for her city added to the enjoyment of the evening. A small group of us started out with a 3-course meal at Fontana di Venere, a pleasant restaurant in the city centre.

We were joined by a larger group and went to see the Trevi Fountain, recently revealed in all its refurbished glory. The marble glowed brilliant white and the turquoise water glittered as a steady stream of coins cascaded into its curved basin. Completed in 1762, Taming of the Waters is the theme of the gigantic Trevi Fountain and the statue of Oceanus dominates the scene. 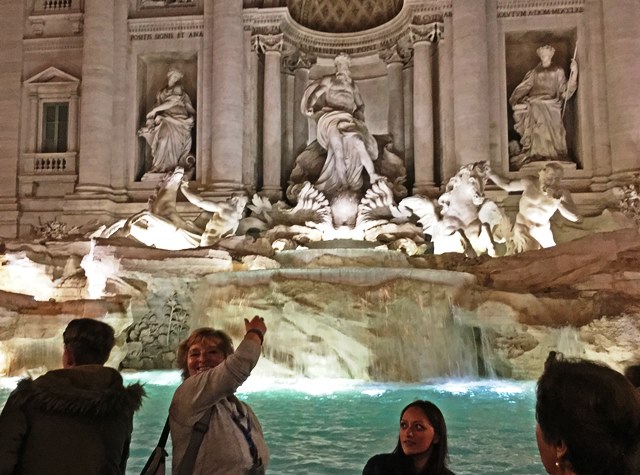 Three coins in the Fountain

Sandra said, “Stand with your back to the fountain. Throw a coin from your right hand over your left shoulder and you’ll return to Rome for sure.” I threw three coins in the fountain, just like in the song, as I had already fallen deeply in love with this city and definitely want to return. 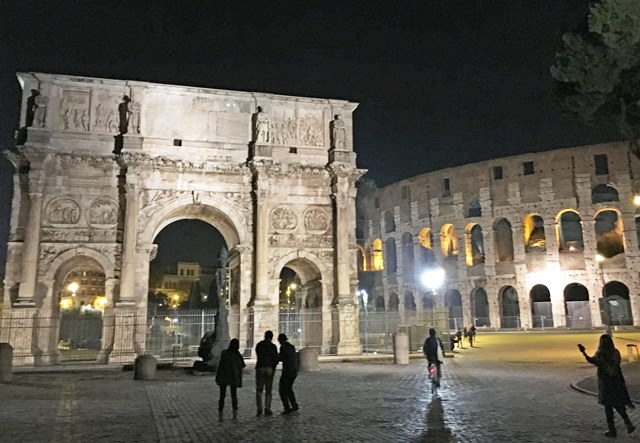 The Colosseum at night

Then it was on the coach to the Colosseum. It really is breath-taking in size, architecture and historic significance. We drove round it as Sandra gave us its story then walked up to it via the Arch of Constantine. It was wonderful to finally see it. We drove on round many sights and then across the Tiber to Trastevere, where we wandered the narrow streets and enjoyed the friendly, lively atmosphere amongst restaurants, bars, shops and charming buildings. 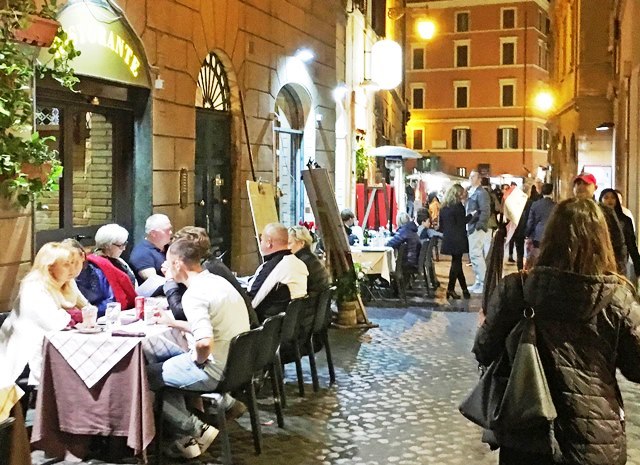 I got back to the Hotel Ariston at 11pm, tired but very happy, having already got a flavour of this magical city. 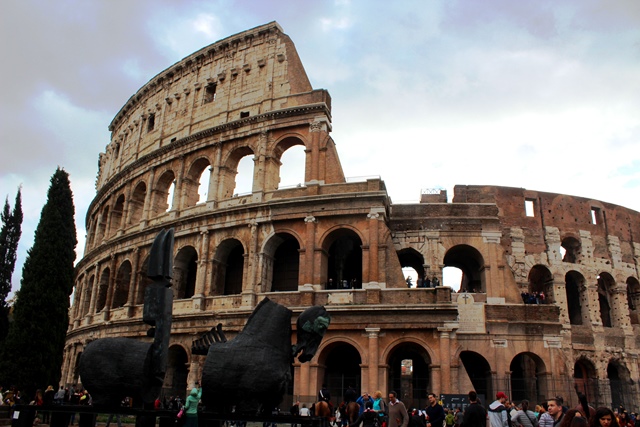 The Colosseum and Horse Sculpture

Getting the Metro to the Colosseum means coming out directly opposite – a real WOW moment. Even if you’ve seen it in the evening, it’s still impressive. Pay extra to get a ‘jump the queue’ ticket to avoid the queues or, if time’s limited, walk around it just get a feel for its magnificence. The ticket includes Palatine Hill, where Romulus founded the city and Emperors built their palaces and the Forum, ancient Rome’s centre of temples, basilicas and public spaces. This could take you all morning or afternoon, to really enjoy at your leisure. I got a great view of the Forum from behind the Capitoline Hill, along with a very photogenic seagull! 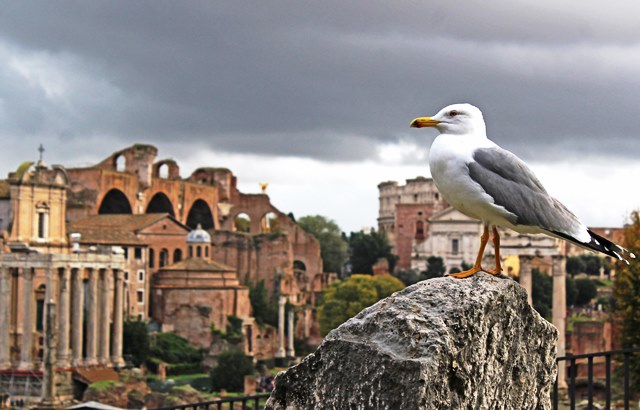 The Forum – and seagull!

From here you can walk through the lovely Piazza del Campidoglio, designed by Michelangelo in 1538, with an impressive statue of Marcus Aurelius overlooking the city below, between two huge statues of Castor and Pollux. the Capitoline Museums house one of Italy’s finest collections of classical sculptures. Again, if you want to visit the museum, make sure you leave plenty of time to enjoy it. 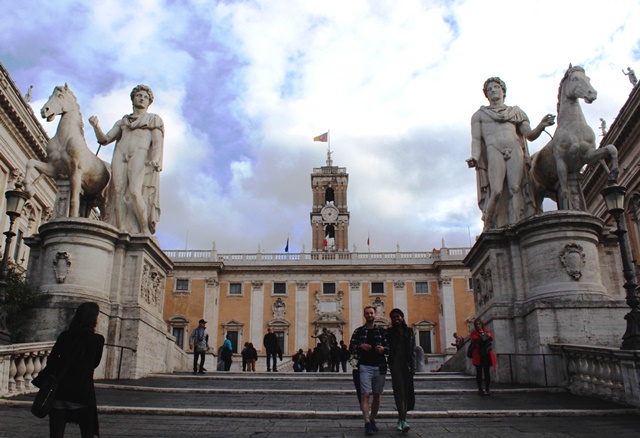 Just round the corner, in Piazza Venezia is Il Vittoriano, or Altare dela Patria. This mish-mash of ornate styles in honour of Victor Emmanuel, first king of united Italy, is home to the Tomb of the Unknown Soldier and has one of the best views of Rome from the top. 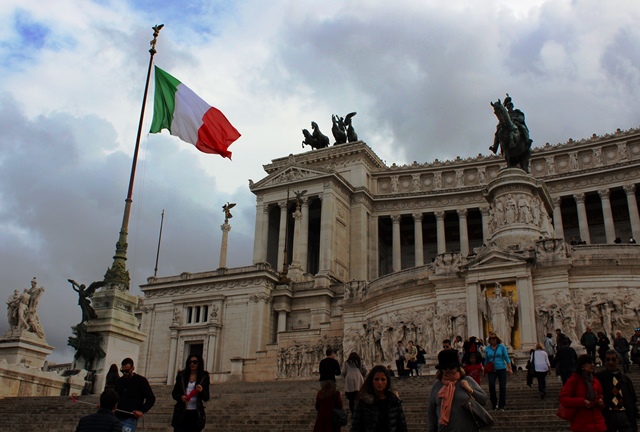 By now you’re probably hungry and need to refuel for your 48 hours in Rome so head towards Historical Centre and the Pantheon where you’ll find plenty of restaurants and bars. Or do what I did, which was to grab a pizza slice and make my way over the Tiber to Vatican City. 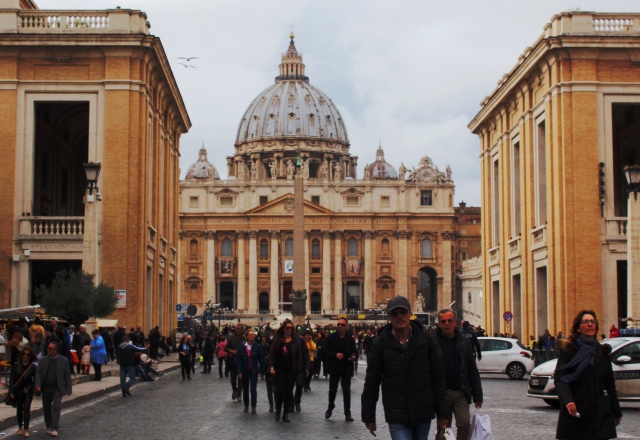 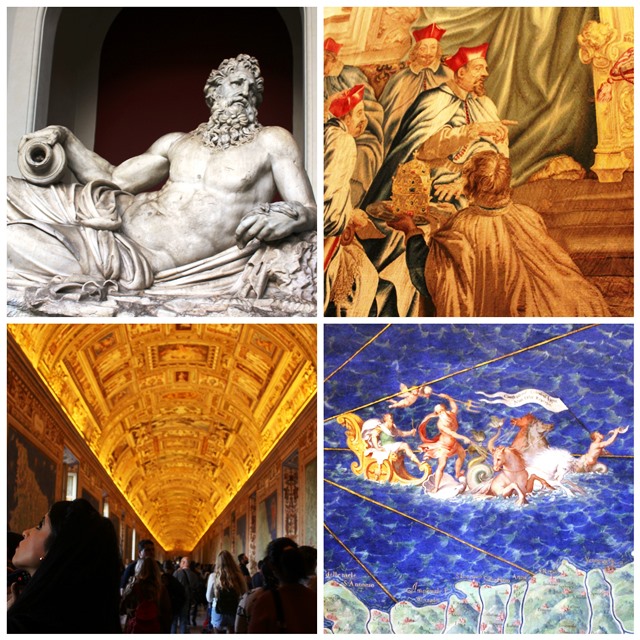 Every room and corridor was crammed with people gazing in awe at the every surface, being gently chivvied along by guides and we only scratched the surface of the Vatican Museum. Finally we came to the Sistine Chapel. It is simply breath-taking. Every inch of the walls and ceiling is covered with colourful frescoes by Michelangelo and his acolytes. We had twenty minutes to take it all in – and, in spite of the crowds, I’d have happily spent all afternoon there. 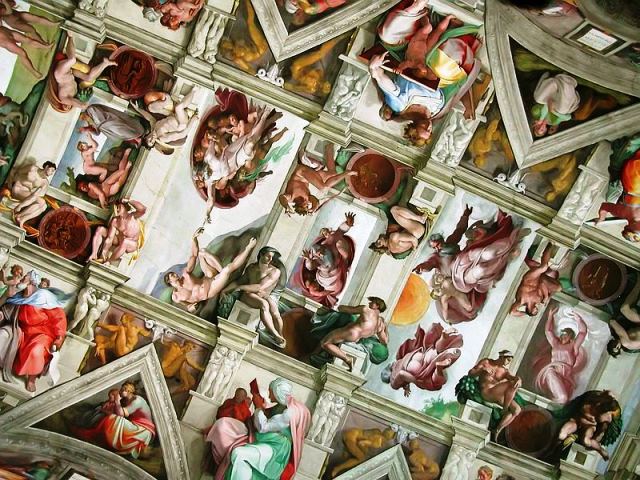 The final part of the tour was to St Peter’s Basilica and, because Pope Francis had declared a Jubilee, we were allowed in through the Holy Door, along with thousands of pilgrims from around the world. At the end of the nave Bernini’s ornate Baldacchino towers above the High Altar. Michelangelo’s Pietà draws the crowds, but every inch of this enormous church demands attention. 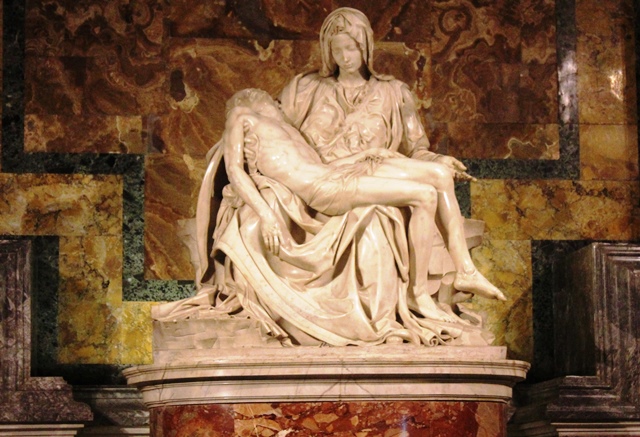 As we left Vatican City I looked back at it lit up and knew I’d have to return another time to spend more time uncovering its cultural treasures.

In the evening you’re spoilt for choice where to eat. I returned to Trastevere, in a quieter corner and had an excellent meal at Le Mani in Pasta. (Read more in article about Food and Drink in Rome.) 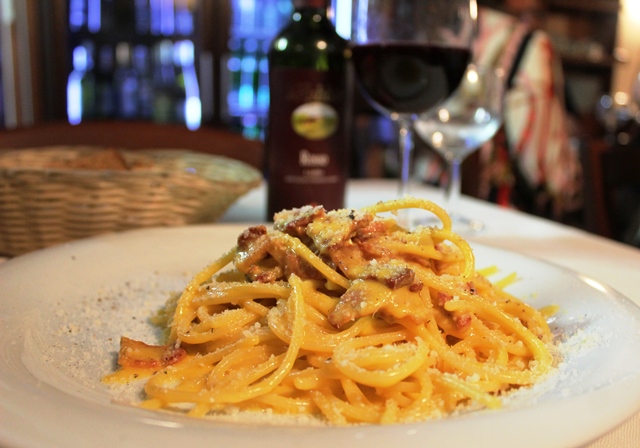 You’re probably a little tired by this stage in your 48 hours in Rome but there’s still so much to see. There’s the Pantheon, Piazza Novona, Aventine Hill, Castel Del Angelo, more museums, art galleries, shops, restaurants … I got the Metro to the Spanish Steps, which were relatively quiet early on a Sunday Morning.

Children played and drank from the quirky boat-shaped fountain, a chestnut seller kept warm over his brazier and horses snorted as they waited for tourists to show round town. Watch the video to get a real sense of the lovely atmosphere.

I wandered off along the path towards the Villa Borghese. There are wonderful views across the city here. I didn’t have time to visit the Villa but went down into Piazza del Popolo just as midday bells rang out across the square from at least three churches …

I walked along Via del Corso past huge churches, fashionable shops and people enjoying the late autumn sun. My final stop on was the Pantheon. Formerly a Roman temple c 126AD, it’s now a church on the site of an earlier temple commissioned by Marcus Agrippa during the reign of Augustus. Sadly I couldn’t go inside as it was time to leave. However, I am most definitely coming back for another Roman Holiday; 48 hours in Rome just isn’t long enough! 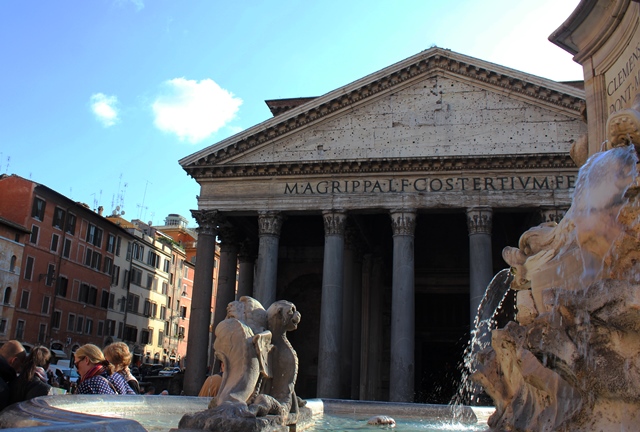 Many thanks to Citalia, leading specialist in Italian holidays, who organised this 48 hours in Rome weekend. They earned the title of ‘Best Tour Operator to the Italian Peninsula’ for six consecutive years.  The Citalia team are friendly, expert and knowledgeable in all things Italian and have local concierges in each destination for personal recommendations, advice and help with day trips, car hire, or restaurant bookings. For more information visit the Citalia Rome page.

Most Romantic Locations in Rome

Quirky Things to do in Italy 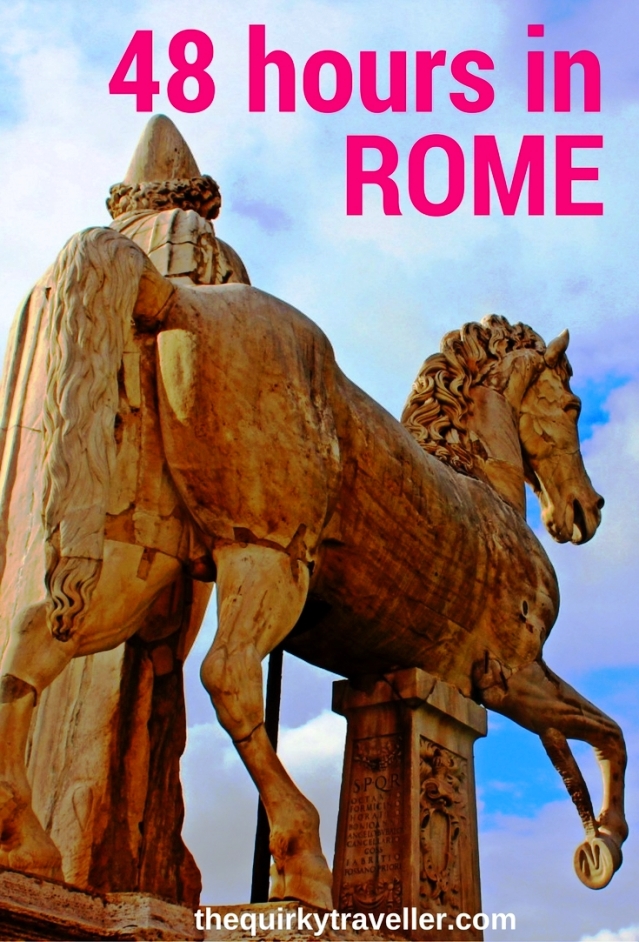 « Previous post
Top 10 memorable moments from a Canada road trip – Vancouver to Calgary via the Rockies
Next post »
Historic Heysham: off the beaten track in Lancashire