An invigorating walking holiday on the Yorkshire coast 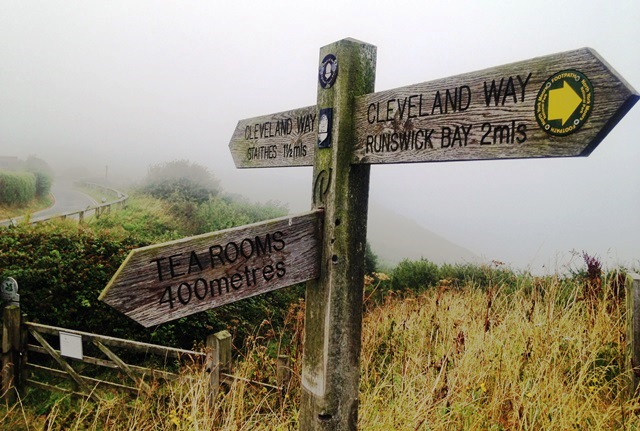 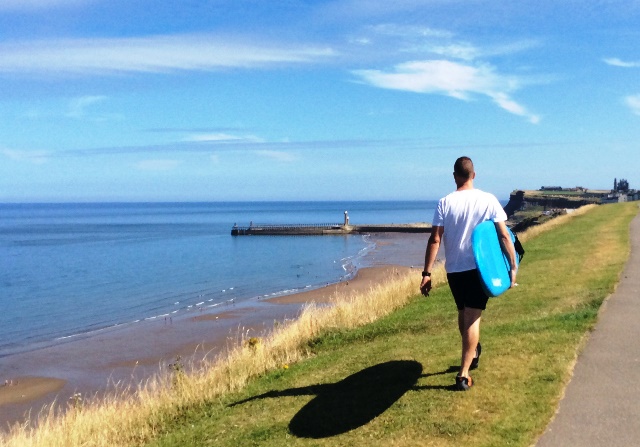 Striding along the cliff top, the surfer added a somewhat incongruous element to this view of Whitby by the North Sea on the Yorkshire coast. I was here on a walking holiday with HF Holidays, and enjoying the great weather before going to Larpool Hall, where I was staying for 3 nights. 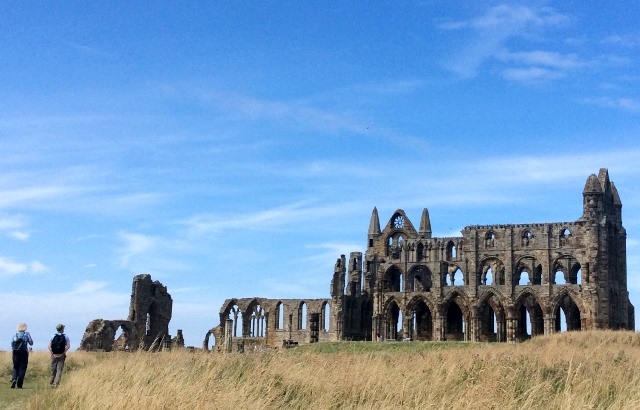 Famous as inspiration for Bram Stoker’s Dracula, dramatic Whitby Abbey dates back to the 13th c. I spent an hour wandering about and taking photos, watching children having a go at archery and listening to the excellent audio-guide. Then I headed off to Robin Hood’s Bay, one of the North Yorkshire Coast’s most popular tourist spots.

The tiny harbour marks the end of the Coast to Coast Walk, which starts near where I live, on the Cumbria coast, at St Bees. It was lovely to see so many people enjoying the summer sun, sitting outside the pub, dabbling in the rock pools, paddling in the sea and sunbathing on the beach. A perfect summer’s day. 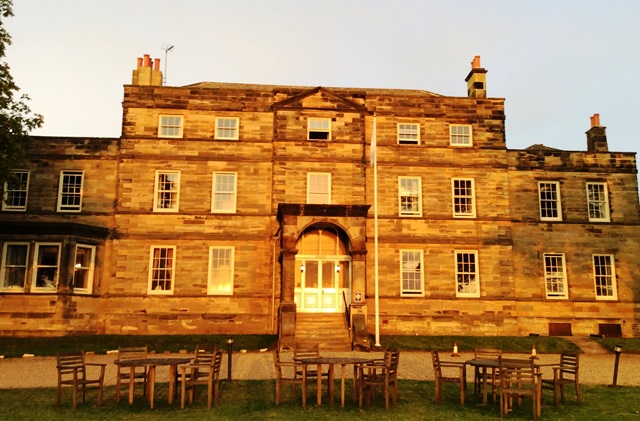 I arrived at Georgian Larpool Hall in the late afternoon and was welcomed by friendly Assistant Manager Sally who showed me around. My en-suite single bedroom overlooked the courtyard and had everything you’d want for a few days’ stay.

I had missed afternoon tea but was in time to meet fellow guests and go for the introductory walk with Christine Brook,  our guide for the next few days. HF Holidays runs with a large team of volunteer guides who play a huge part in the success of the company. Christine gave us a bit of history of the Larpool Hall, then we went along the railway trail which goes past the back of the house. 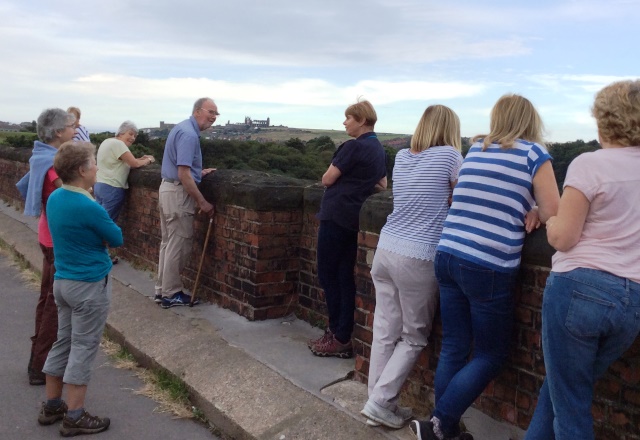 We stopped at the local secondary school which has a replica of a Celtic Cross to commemorate Anglo Saxon poet Caedmon, who looked after the animals at Whitby Abbey in the 7thc AD. On our walk back we saw the abbey silhouetted  in the evening sun and caught a glimpse of a North Yorkshire Moors Railway steam train puffing into the town centre. 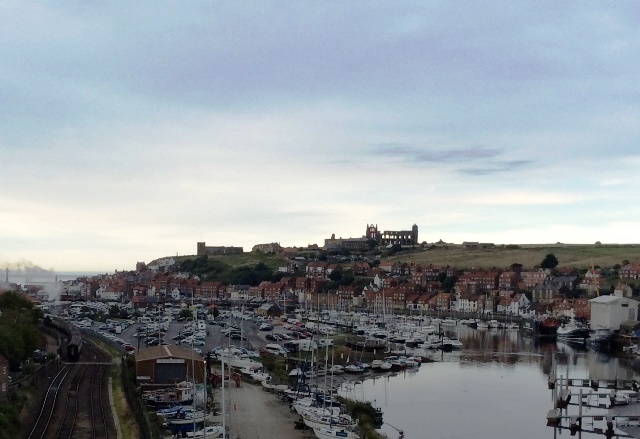 Back at Larpool Hall, there was just time to get changed before Christine gave us a briefing about the next day’s walk, along the coast. I was a bit unsure of the protocol for dinner but a helpful waiter explained it was free seating so I joined one of the circular dining tables. The food is excellent – I can see why guests love it here. I’ve been on a number of group holidays and sometimes the food lets it down. Not at Larpool Hall.

Table-talk was convivial and everyone was very friendly. I was there on my own but not for one minute did I feel lonely. After dinner about 40 of us took part in a lively General Knowledge Quiz, ably chaired by Christine. Every evening there was an organised activity but they’re not compulsory; I spent one evening chatting with fellow guests at the bar. There was a stunning sunset; sadly the maxim; ‘Red sky at night, shepherd’s delight‘ was not so accurate. 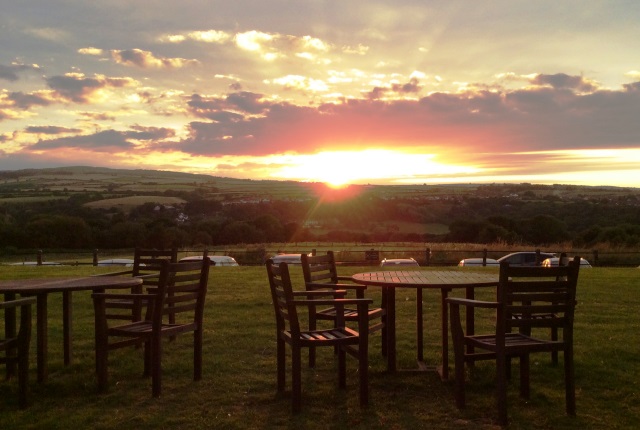 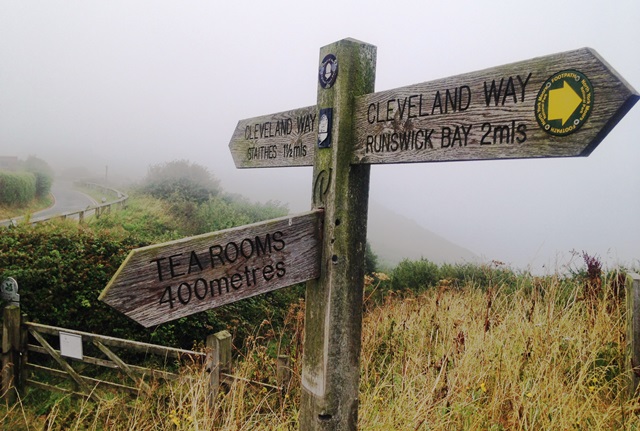 The next morning was overcast but dry. After an excellent cooked breakfast, I collected my packed lunch. The day before, I’d ordered a sandwich from a list of fillings and bread; it was waiting in the dining room, along with a tempting selection of ‘ingredients’ which include fresh fruit, raw vegetables, cheese and crackers, dried fruit, hard-boiled eggs, cake, biscuits and loads more.

Our mini-bus took us to Runswick Bay, the starting point for our coastal walk to Staithes. Originally a fishing village, now it’s a very popular tourist destination. The quaint fishing cottages are mostly holiday homes and it has one of Britain’s few independent Life Boat Stations. It was misty so the views across the Bay were limited but it wasn’t raining and we were all in very good spirits. 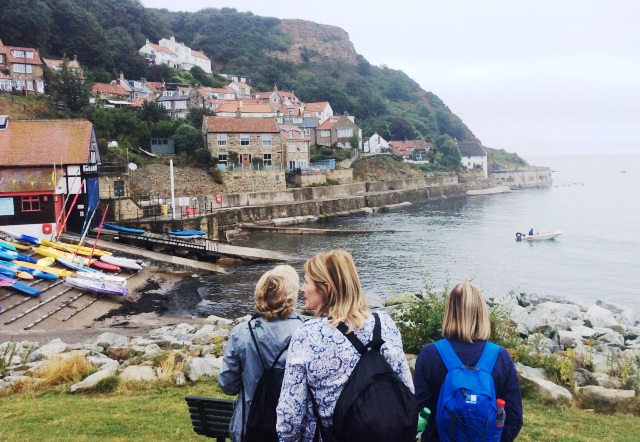 We set off along the Cleveland Way, following a well-marked path that took us along what would be a spectacular coastline, had the sea fret not rolled in and obscured our view. Access to the little bay of Port Mulgrave is currently closed due to erosion of the cliffs. Christine explained the old harbour was used to transport iron ore, which was mined locally and taken to Jarrow for processing. Through the mist we could just make out some old buildings and the remains of the pier. 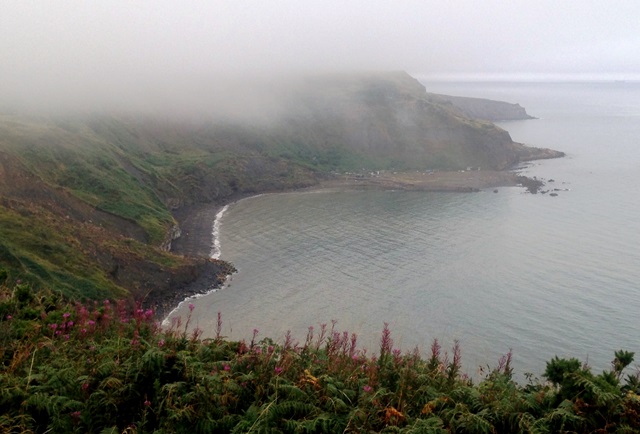 We arrived in Staithes in time for lunch, which we ate on the attractive harbour front. Formerly a mining/fishing village, Staithes is on the way up, as can been seen in the rebuilding and new shops opening up everywhere. BBC TV children’s series Old Jack’s Boat, starring Bernard Cribbins, is filmed here and there are plenty of souvenir and craft shops, plus an Art Gallery. Staithes was home to the Staithes Group, a 19thc art colony. 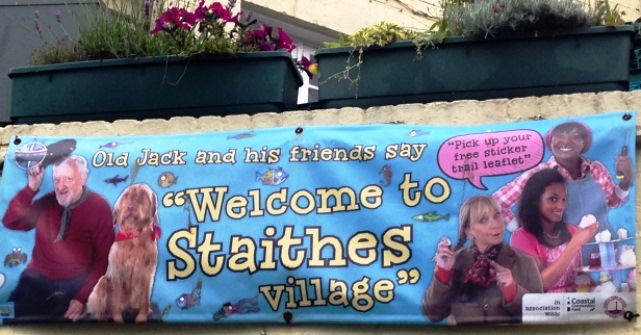 The quirky little Captain Cook and Staithes Heritage Centre has a comprehensive collection of  Cook memorabilia, collected by the owner in charming higglede-piggeldy displays. There’s also a unique exhibition of photographs and objects telling the story of Staithes. It’s one of the best small museums I’ve ever seen. 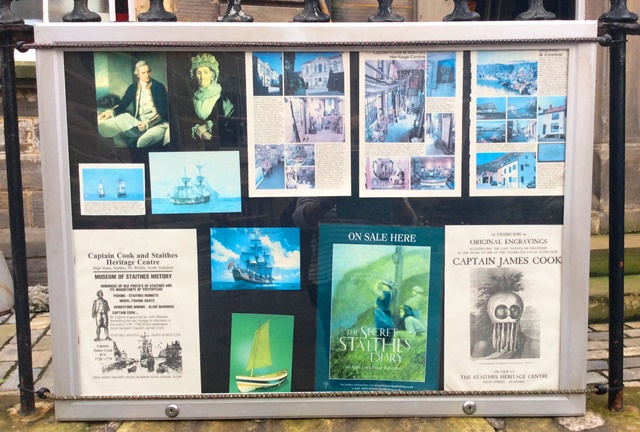 It started to rain as we got into the mini bus to take us back to Whitby. Some went back to Larpool Hall and a few of us joined Christine for an afternoon walk round the town. Even in the pouring rain, Whitby has an evocative charm all its own. We saw Captain Cook’s statue, the Whalebone Arch, the hotel where Bram Stoker wrote ‘Dracula‘, the jet shops along the little lanes and the 199 steps up to Whitby Abbey. 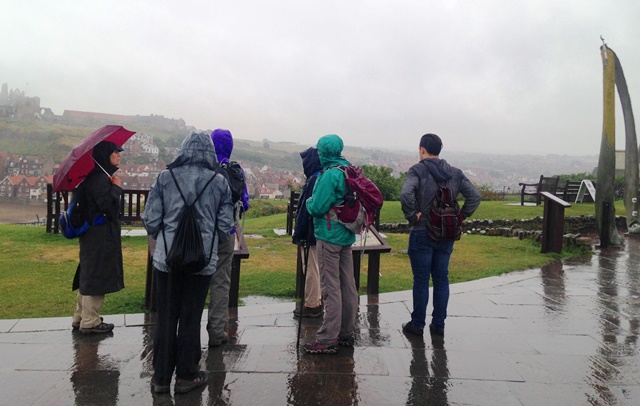 Our group in Whitby rain

Our walk back took us through Pannett Park, where we stopped off at the Art Gallery and Whitby Museum. We got back to Larpool Hall in the late afternoon, nicely worn-out after our day’s walking and ready for another delicious dinner. 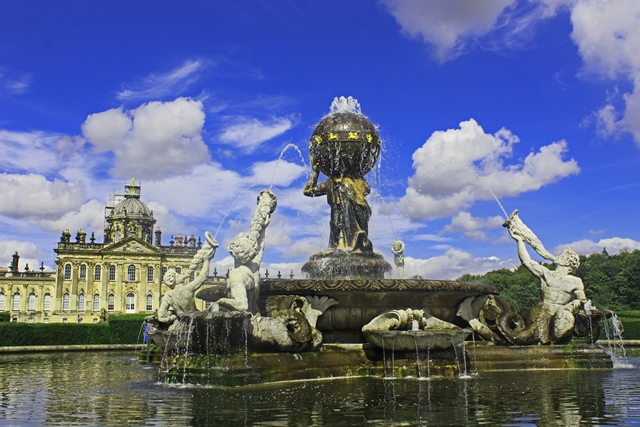 The sun shone throughout our final day of the walking holiday. Our coach driver dropped us off on the edge of the Castle Howard estate and we took a leisurely stroll past the Temple of the Four Winds, the Mausoleum and the Pyramid – and a very fine herd of Angus cattle. 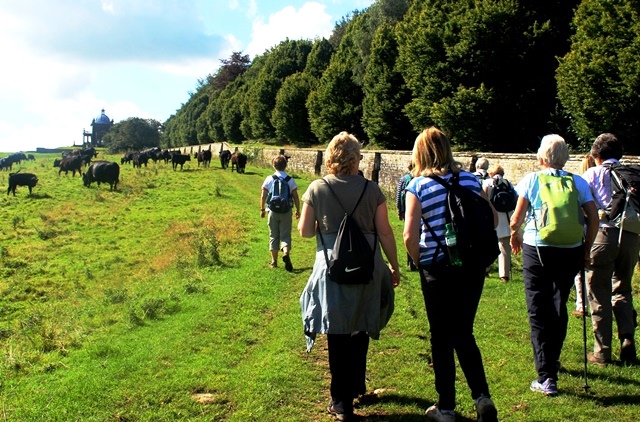 Our day was spent exploring the grounds and interior of Castle Howard, built between 1699 and 1702. The top of the famous dome is being re-gilded but the beauty of the house is still apparent, especially when viewed from the splendid Atlas Fountain. I ate my packed lunch in the delicately scented Rose Garden. 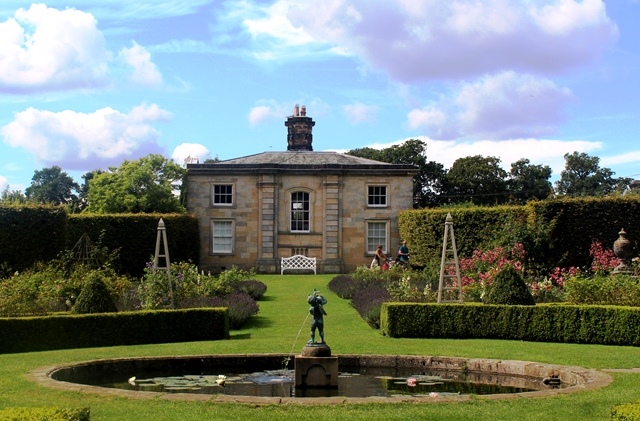 Every room in Castle Howard is a treasure trove of beautiful paintings, impressive sculptures and exquisite furniture, much dating from its heyday in the Georgian era. The interior view of the dome (restored after a serious fire) is breathtaking and there is an interesting display of photographs from the filming of Brideshead Revisited. The Howard family Chapel has lovely Pre-Raphaelite stained glass windows designed by Edward Burne-Jones.

On our way back to Larpool Hall we crossed the North Yorkshire Moors which were flooded with purple heather. That evening dinner was very lively as we shared our favourite parts of the walking holiday. Christine organised a little quiz for those staying in and took me down to the town centre for the last night of the Whitby Folk Festival. Listening to sea shanties and blues music sung in a traditional pub seemed a very fitting end to a very memorable few days on the Yorkshire Coast. 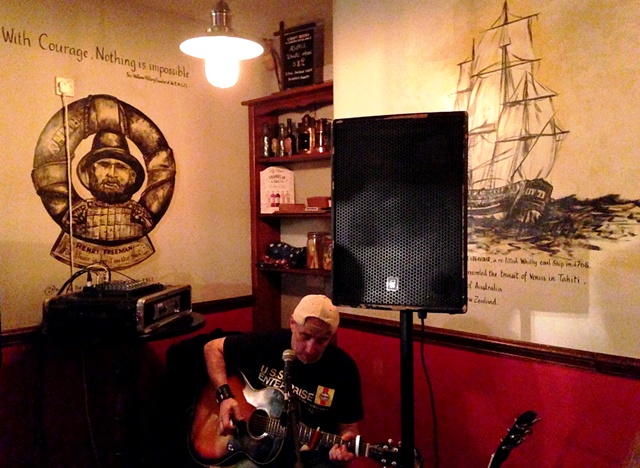 Many thanks to HF Holidays for inviting me. You can find out more about their Walking with Sightseeing Holidays here. Thanks also to Christine for cheerful guidance on the walking holiday and to Sally and the team at Larpool Pool for being so helpful and friendly. Finally, a special mention to the friends I made during the trip and to my feisty fellow walkers. It was a real pleasure to spend time exploring the Yorkshire coast and surrounding area together. 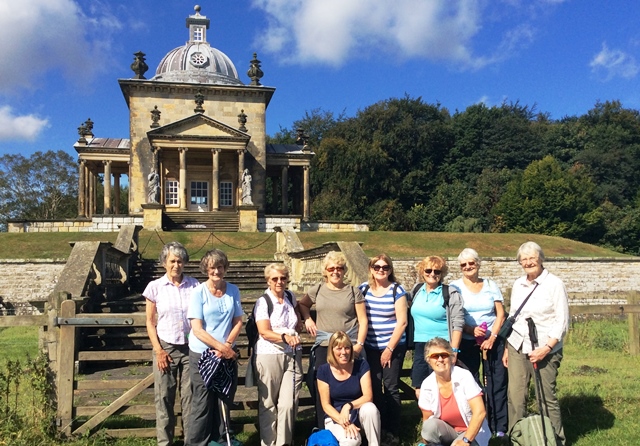 Our walking group in front of Temple of the Winds, Castle Howard

« Previous post
Apples in autumn; a sublime treat for all the senses …
Next post »
Enjoy 24 hours in Calgary, Alberta