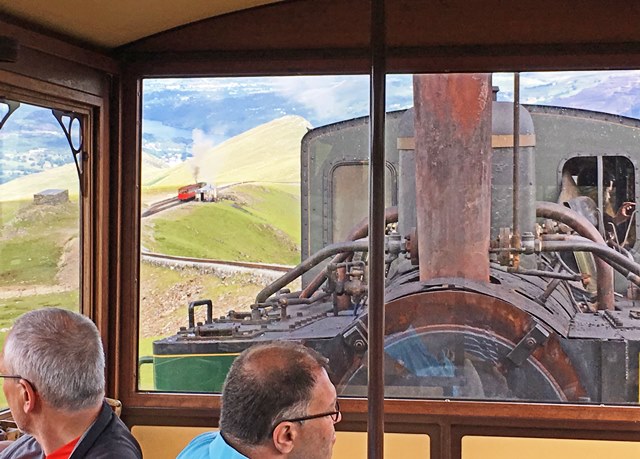 The air freshened and the clouds twirled closer together. A seagull landed on a nearby rock and squawked loudly. The sun played hide and seek as we wondered which would win. For a few minutes the world disappeared in a damp, grey mass and we felt bereft … 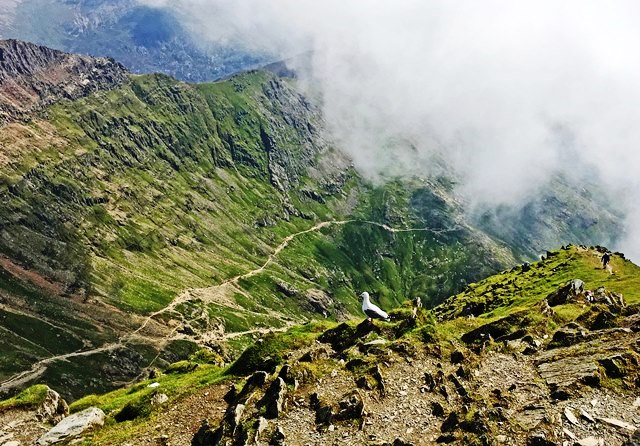 Then, just as quickly, the sun returned, the sky turned peacock blue and the seagull shook its wings and flew away to play on the thermals. Below us spread the most dramatic scenery in Wales; craggy mountains, grass-covered slopes, river valleys, glittering lakes and in the far distance a golden eyebrow of beach beside the sea. I was finally on the top of Snowdon, at 1,085 metres the highest mountain in Wales and somewhere I had wanted to get to for many years. 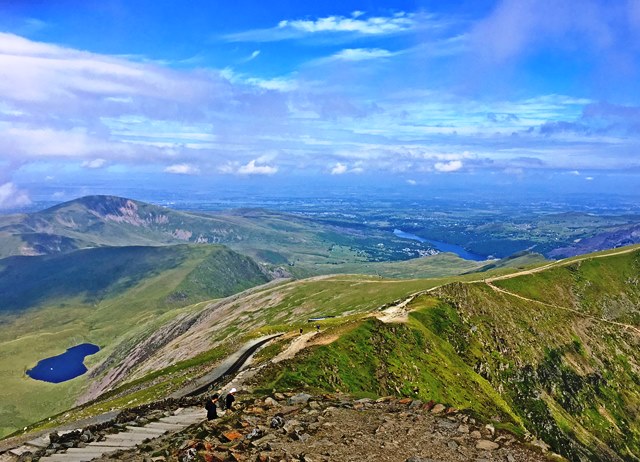 View from the top of Snowdon

Twice before I’d attempted it. The first time many years ago, as a school teacher taking a group of school children on a hike up the mountain. Sharon, a feisty young girl, had an accident on the Miner’s Track and I had to accompany her back down to Llanberis. The second time, my boyfriend and I drove all the way from the Midlands, turned up at the Snowdon Mountain Railway ticket office to be told that the it was too windy and the trains were cancelled. This time I was on a tour with Great Rail Journeys and Rail Discoveries and we were having the best weather imaginable. 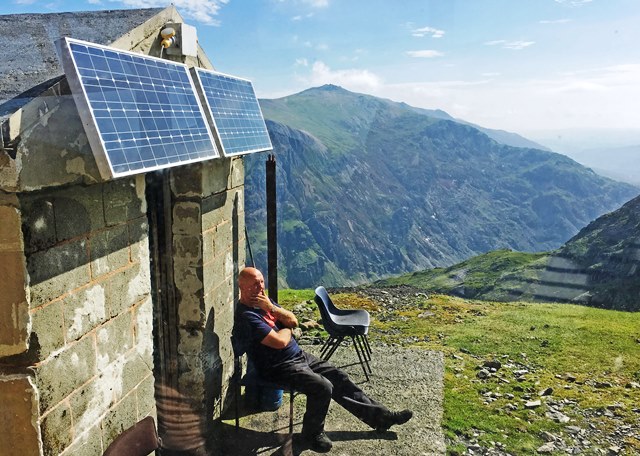 Our group had been driven by coach to Llanberis from Llandudno on the North Wales coast and got one of the earliest trains up the mountain. One of the pleasures of being on a tour is having all the organisation done for you; no queueing, tickets in hand and no hassle. For the train buffs amongst you, the Snowdon Mountain Railway is narrow gauge, 4.7miles long and is Britain’s only public rack and pinion railway. It started in 1896 and has been operating ever since, taking millions of tourists to the peak of one of the loveliest mountains in the British Isles. 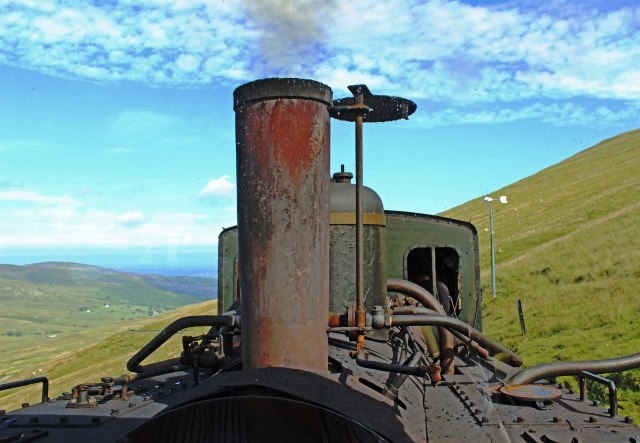 Our train was pushed by illustrious steam engine Wyddfa (Welsh for Snowdon), built in 1895 and still going strong. I had a chat with Stoker Paul, who explained that the engine originated in Switzerland (the Swiss know a thing or two about mountain railways) and pushes the train UP the mountain via the rack and pinion system. There was a great feeling of anticipation as we chugged out of Llanberis Station, over a river, past a slick of waterfall and through ancient oak woods. ‘Sir Richard Moon built his railway knowing that the journey his little trains would make, would offer us a magical panorama, that until then, had only been available to the intrepid climber.’ (From the excellent Snowdon Mountain Railway Souvenir Brochure)

As we slowly emerged into a more barren landscape, in the distance peeked the summit of Snowdon. We couldn’t believe how lucky we were as the sun shone and there was not a rain cloud to be seen. A couple opposite me said the last time they’d been, 23 years ago, the weather had been very different. “But, even on such a drizzly, windy day, we got glimpses of the amazing scenery and loved it. We had to come back but didn’t really expect it to such glorious weather.”  We climbed higher at a steady pace, occasionally running parallel with walking paths where hardy hikers made their way up and down the mountain. We got close up to mighty rocks that would give geographers a huge thrill. Overhead a bird of prey checked out the land; maybe a peregrine falcon? 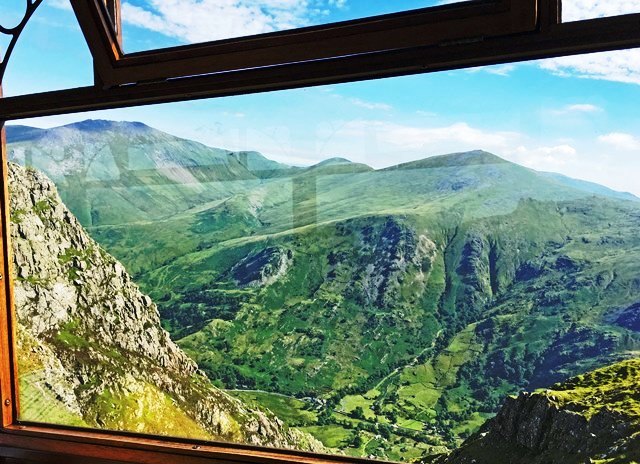 View from the carriage window

I spotted the ruins of some stone huts, apparently the remains of one of the oldest settlements in Wales. We stopped at appropriately named Halfway Station (500m above sea level) where we filled up with water and another steam train passed us on its downward journey. We waved at the passengers in the carriages opposite. Everyone had big smiles’ this is the sort of trip you’d have to be a very miserable git not to enjoy. The Llanberris Pass was clearly visible far below in what is known as the Cwm Hetia, Valley of the Hats. To our right, enormous curved mountains loomed past and we got superb views of many lakes, rivers and hills out towards the Lleyn Peninsula and over to Anglesey.

Engine 11 Peris at the top of Snowdon Mountain Railway

The steepest part of the track is before the summit and the our trusty engine chuffed out more smoke as it bravely pushed its heavy cargo of carriages up and round the corner to the Snowdon Summit Visitors Centre. We stepped down from our carriage, through the cafe and gift shop and out the back of the centre, up to the rocky point which is the actual summit of Snowdon, 1085m. There must be very few mountains that have such a perfectly formed point, enabling so many people to reach the top, get their souvenir photo and enjoy the breathtaking scenery all around. We’d made it, on a unique, never-to-be-forgotten railway journey to the top of Wales … 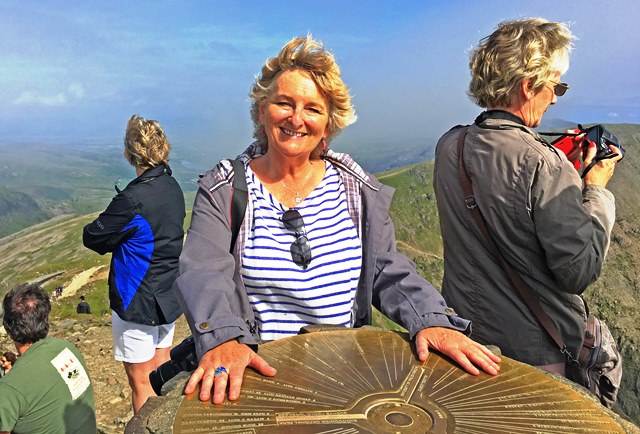 On top of Snowdon

I travelled to North Wales courtesy of Great Rail Journeys and Rail Discoveries. Our group stayed in Llandudno at the very comfortable Dunoon Hotel, with superb food in charming surroundings. We also had an excellent Italian meal at the Wildwood Restaurant in the town centre. We had a great time travelling on four steam railways in the area, including the splendid Snowdon Mountain Railway. 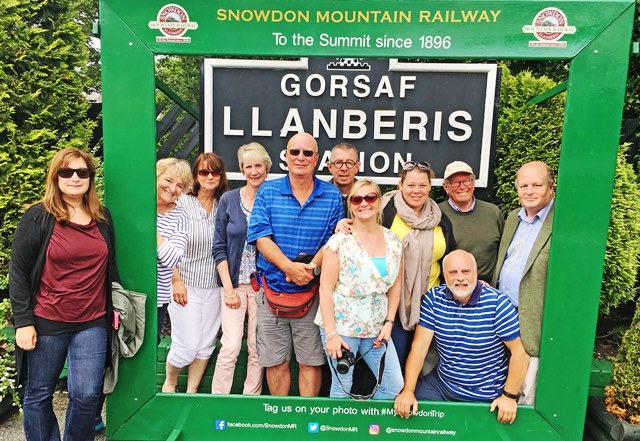 Our group at Llanberis Station

Great Rail Journeys Railways & Castles of Wales Tour includes a stay at the award-winning Dunoon Hotel, journeys on the Welsh Highland, Ffestiniog and Snowdon Mountain Railways plus excursions to Portmeirion Village and Caernarfon and Conwy Castles. GRJ Independent can also tailor make holidays to the region for those wishing to travel to Wales on an individual basis.

Rail Discoveries Railways of Wales Tour includes a stay at the Kensington Hotel, journeys on the Welsh Highland, Ffestiniog and Llangollen Railways, a horse-drawn boat trip on the Llangollen Canal, and excursions to Portmeirion Village and Caernarfon Castle. Read about our four Steam Train rides in North Wales here. 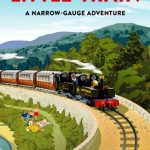 From stalwart little locomotives of topographic necessity, to the maverick engines of one man’s whimsy, Britain’s narrow-gauge steam trains run on tracks a world apart from its regimented mainlines. Read my review of Small Island by Little Train – a Narrow-Gauge Adventure by Chris Arnot and discover some of their stories. 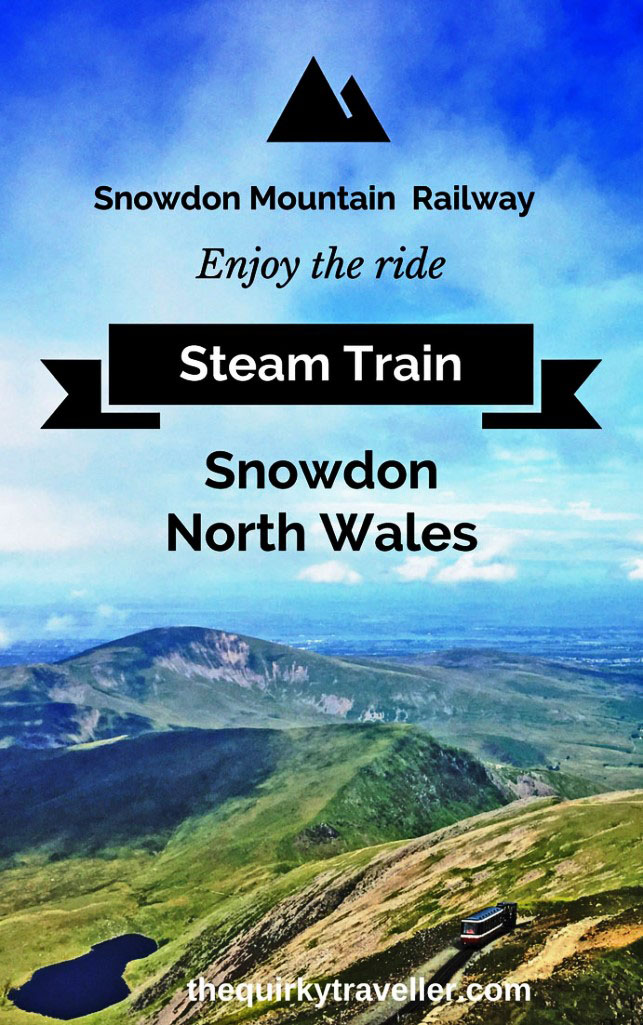 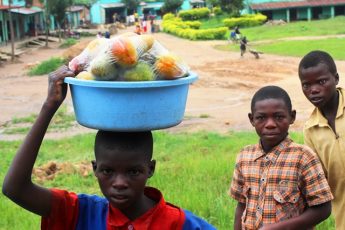 « Previous post
Quirky Travel Photo: Little African boy by a stream in Rwanda
Next post »
Visit 6 of the most notable tourist destinations in Japan