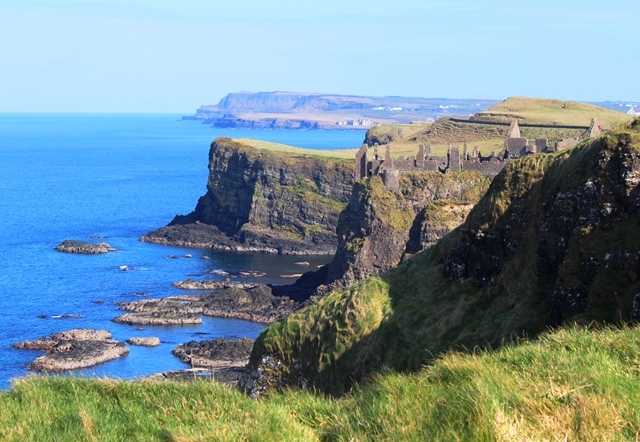 Dunluce Castle and the Giant’s Causeway from Magheracross Viewpoint

It’s not often that a place truly exceeds expectations, is it? Often we’re a bit disappointed, having heard good things about a book, film, restaurant or place, which then struggles to live up to our imagination. The Causeway Coast on Northern Ireland not only exceeded my expectations, it totally blew them away. 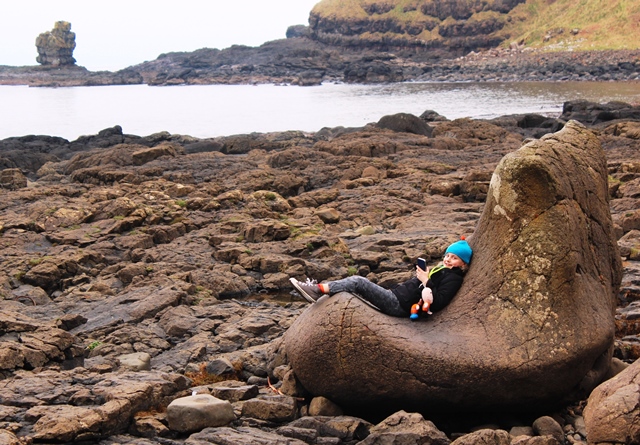 Having recently seen a re-run of an episode of BBC Coast featuring the Giant’s Causeway on the Antrim Coast, I knew it was an interesting coastline, but nothing prepared me for the reality of its spectacular beauty. I spent a long weekend in Northern Ireland, driving from Larne to Bushmills along the famous Causeway Coast. Even on a blustery day, the rain-swept beaches and wave-lashed cliffs had a dramatic beauty, and when the sun came out, this stunning coast simply took my breath away. 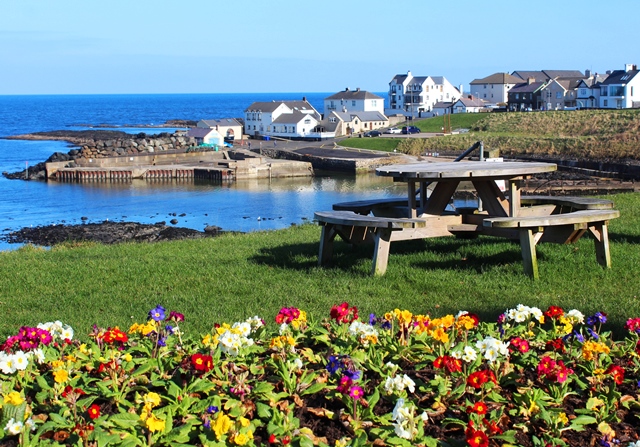 There were so many things to see and do that a weekend was not nearly long enough. However, I did manage to pack a lot in so here are my:

Top 10 places to visit on the Causeway Coast 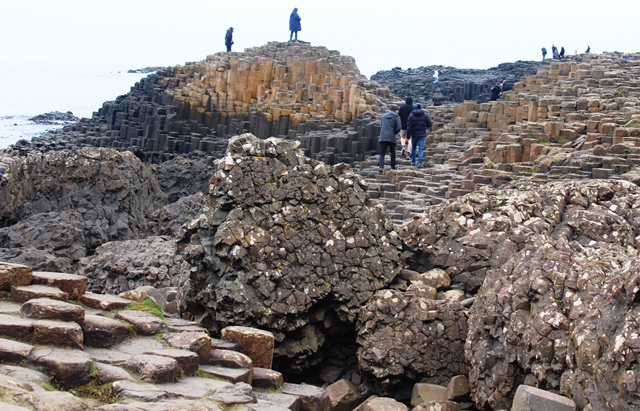 The hexagonal basalt blocks and columns of the Giant’s Causeway, Ireland’s only UNESCO World Heritage Site, are scattered all around. And not just hexagons but four, five, seven and even eight-sided shapes form a jig-saw of geological complexity. Formed about 60 million years ago, it is an astonishing place of myth, mystery and natural wonder. Make sure you take enough time to explore. Join one of the walking tours that start from the excellent Visitor Centre, with its interactive displays, Finn MacCool film and gift shop. The guide points out quirky rock formations such as The Camel, The Giant’s Boot and The Organ, explains how the Giant’s Causeway was formed (volcanic activity) and tells the legend of Finn MacCool. There’s a regular shuttle bus up and down the hill. Wander over the rocks (slippery at times so take care – sturdy shoes recommended) and take a seat to watch nature at her dramatic best. 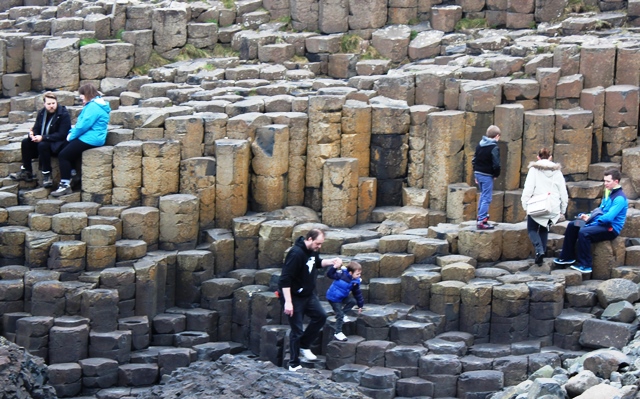 I can highly recommend lunch at the Causeway Hotel – the Caesar Salad was delicious. 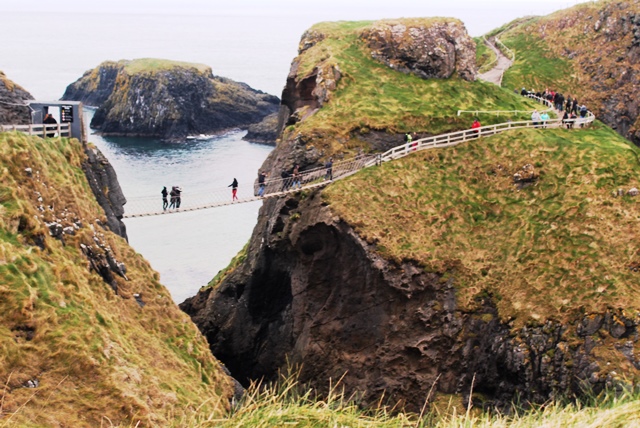 Not far from the Giant’s Causeway is Carrick-a-Rede Rope Bridge. A narrow network of ropes stretches across a dizzying gulf from the mainland to the rocky outcrop known as Carrick-a-Rede. I must admit I wasn’t really keen to go across (vivid memories of my young son bouncing up and down on a rope bridge across an even bigger drop in New Zealand to make Mummy scream …) but had been persuaded by the encouraging National Trust attendant that it really was very safe. Apparently they replace the bridge every 3 years, and it is certainly much more robust than the single handrope the 18th c fishermen first strung across the water. They were after the abundant Atlantic salmon that swirled around these waters on their annual migration. Once over the bridge (my advice is hold on tight and don’t look down) you can still see a tiny fisherman’s cottage, near to where the salmon fishery was situated. The water is clear with irridescent shades of green and blue; it looks more like a Caribbean island than the UK coast. 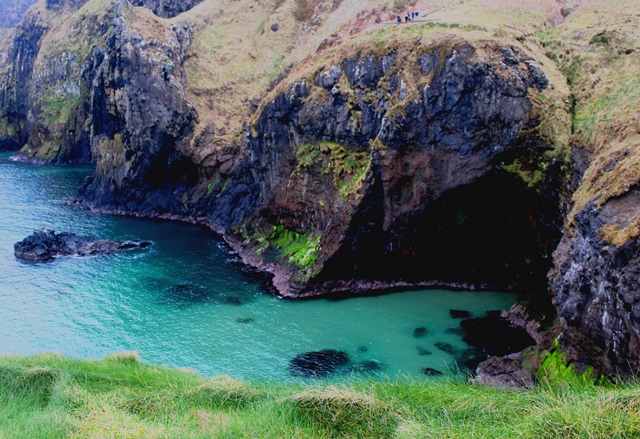 The Causeway Coast from Carrick-a-Rede

Thousands of seabirds, including fulmars, kittiwakes, razorbills and guilllemots, wheel and squeal around the islands and cliffs, providing a noisy soundtrack to this unique experience. 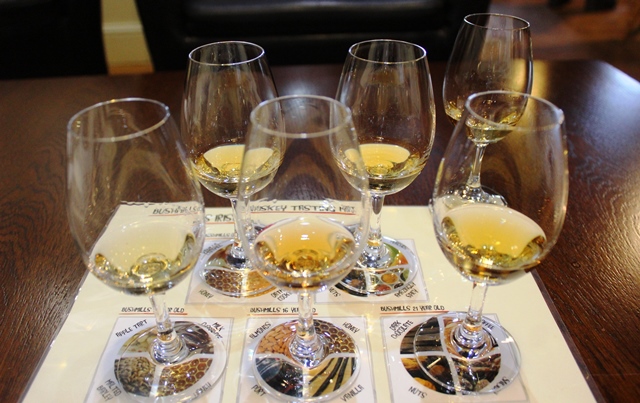 After all the adrenalin rush of Carrick-a-Rede you may need a drink and where better than the world’s oldest whiskey distillery? Bushmills Old Distillery, licensed in 1608) is home to Irish Whiskey at its best. I can say that with a certain degree of authority, having had an extensive whiskey-tasting with Bushmills expert Ben, after a fascinating tour of the distillery. You learn everything about the whiskey-making process, from use of the finest ingredients, through fermentation to distillation (3 times, once more than Scottish whisky), maturation in sherry, port, bourbon and madeira barrels for up to 21 years, and bottling. 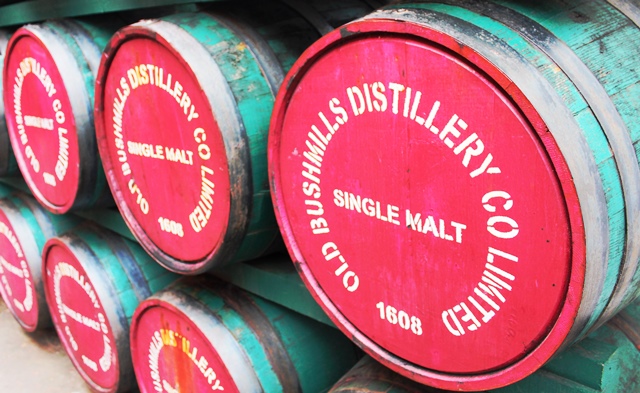 I was given a bottle of their ‘Distillery Reserve’ 12 year Single Malt – and very fine it is too! Situated in the attractive village of Bushmills, the Distillery is one of the main tourist attractions along the Causeway Coast, and well-worth a visit. 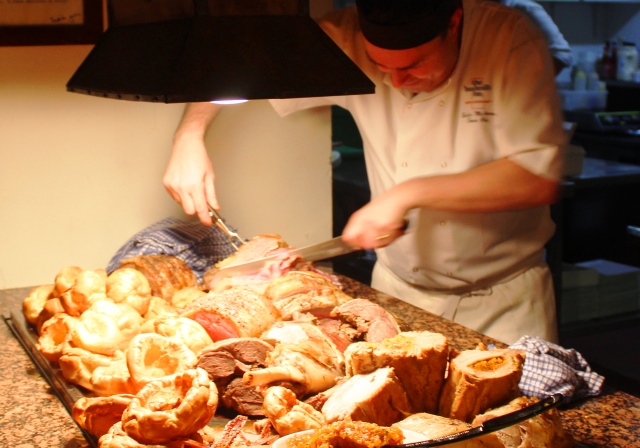 I had an excellent Sunday Lunch (Kilhorne Bay prawns and Irish crayfish followed by roast Tamworth pork and Belted Galloway beef) at the historic Bushmills Inn, a haven of elegant dining. 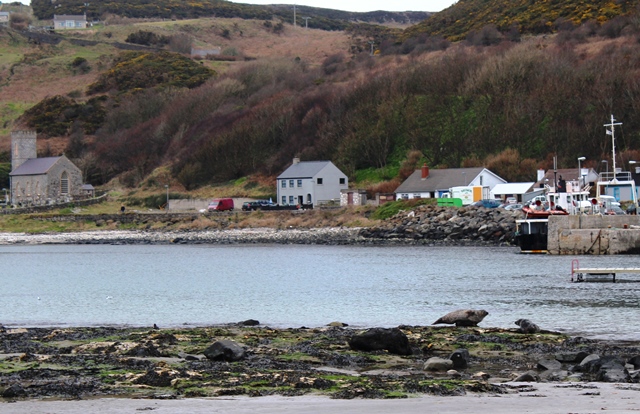 Take the ferry from popular Ballycastle across the Sea of Moyle to Rathlin Island and slow down … It’s a cliche to say it’s like stepping back in time – but on Rathlin Island it’s a fact. With few inhabitants, even fewer cars, a sleepy harbour, old-fashioned pub, quaint Visitor’s Centre and a hotch-potch of lanes and stone walls, the island appears to be in a sleepy time-warp. I spent a couple of hours exploring the village and surrounding countryside. There are three Lighthouses, one of which, the West Lighthouse, is home to the Rathlin RSPB Seabird Centre. Rathlin is home to Northern Ireland’s largest seabird colony. Puffins, very rare choughs, lapwings and many other birds nest here. Fishing boats still go out every day and the baskets add a colourful note to the scenery. 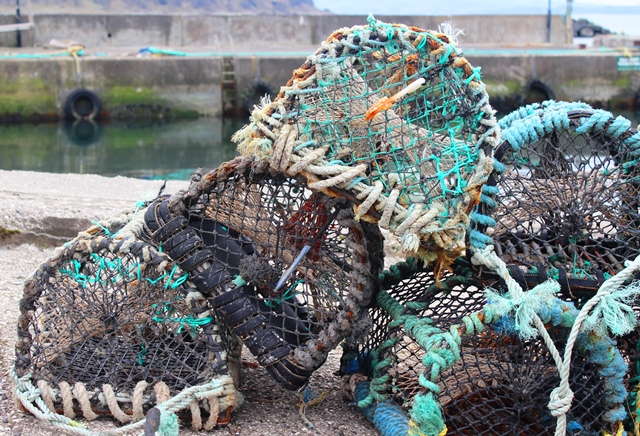 There are spectacular views back to the Antrim Coast and over to Scotland; the Mull of Kintyre is only 13 miles away. Seals wallow in the shallows Mill Bay and the refreshing air of tranquility is most relaxing. 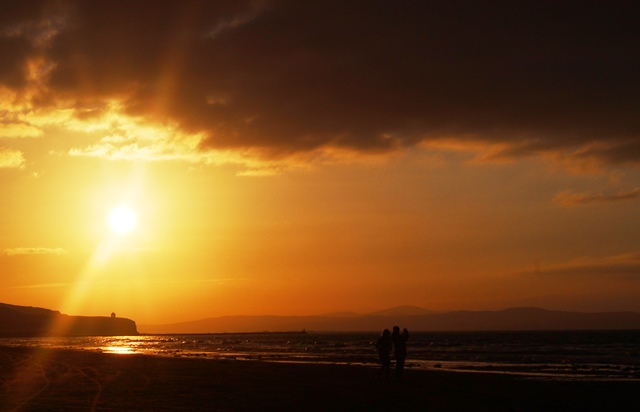 It is almost impossible to choose a particular beach for this list, as there are so many. From long sandy beaches to tiny rocky bays, the Causeway Coast is a seaside treat. However, watching the sun go down on Portstewart Strand and having a big bowl of moules mariniere at Harry’s Shack was a perfect way to end a day out. Families, couples, dog-walkers, joggers, kite-flyers; it’s popular with all and sundry. 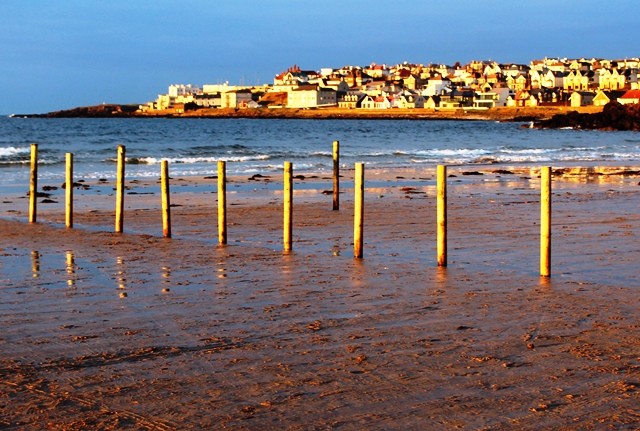 Apparently there are rare orchids amongst the sand-dunes and the National Trust organises regular walks and activities all year round. 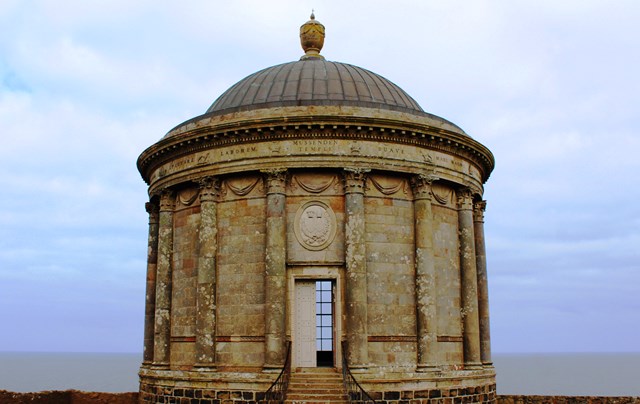 From Portstewart Strand you can see the rounded outline of Mussenden Temple, precariously perched on cliff at the edge of Downhill Demesne (estate). Built for the niece of the 4th Earl of Bristol and Bishop of Derry, Mussenden Temple was designed as a library and is now a famous landmark on the coast. Downhill House was built by the Earl Bishop, Frederick Hervey, in the 1770s and became derelict in the 20th century. The Demesne includes a walled garden, dovecote and summer house and extensive grounds with beautiful views along the coast. 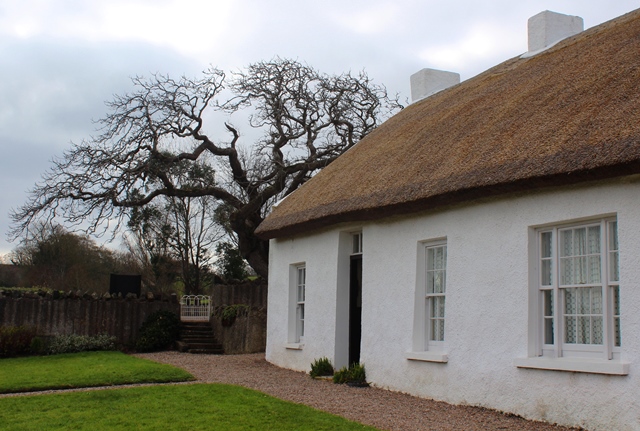 Going from the landed gentry to more ordinary folk, a short distance from Dowhill Demesne is Hezlett House, in Liffock village. Home to a farming family, the timber-framed, thatched cottage dates back to 1690 and is furnished in a traditional manner. It’s a warren of little rooms and low ceilings and quaint nooks. There’s a collection of marble artefacts from Downhill Demesne in a shed by the garden, where grows a large Spanish Chestnut, known as the ‘Hanging Tree’.

Every coast needs a proper seaside resort and Portrush is Northern Ireland’s premier family destination. Here you’ll fnd a lively funfair, plenty of bars and restaurants, lots of shops, a sandy beach, aquarium, cinema and golf course.  I spent a pleasant afternoon wandering around the town with friends, had a Guiness at a waterside pub and an excellent meal at the Mermaid Restaurant overlooking the busy harbour. 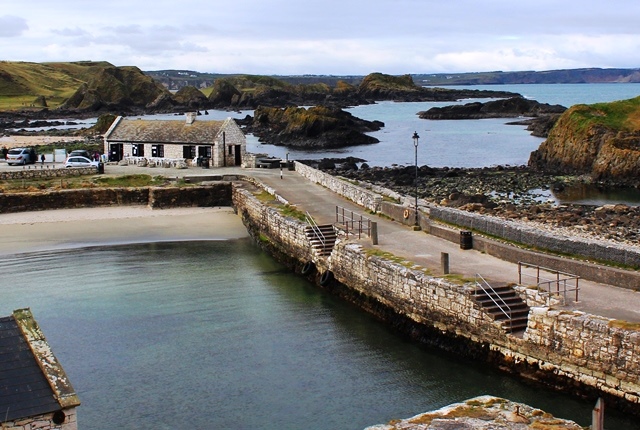 You will no doubt have heard of, and very possibly watch, the blockbuster TV series, Game of Thrones. What you may not know is that most of it is filmed in Northern Ireland. I took McCombs Game of Thrones Tour to some of the ‘Westeros’ locations; they are quite splendid. OK, I have to admit to never having seen an episode of the series, but that doesn’t matter … honest. You can just enjoy the scenery. My guide Derek was a big fan and explained the significance of each place. We went to Cushenden Cave, birthplace of the Shadow Assassin, charming Ballintoy, where Theon Greyjoy cames back to Pyke Harbour, Larrybane Quarry, scene of Renly’s death and I posed in a cape and sword (well, you have to, don’t you?) and the evocative Dark Hedges, where Arya Stark makes her escape down The Kings Road. 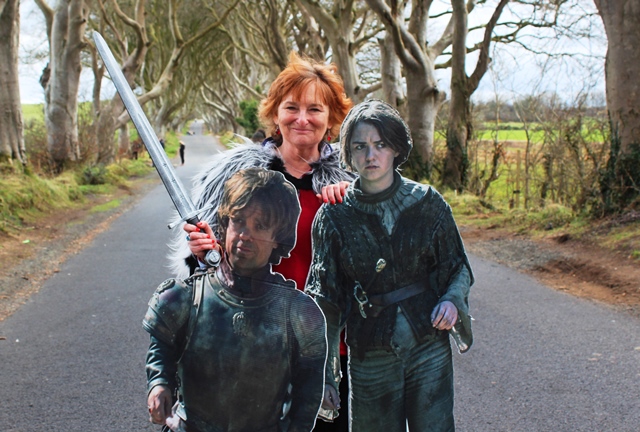 Here I had my photo taken by American tourists who thought I was a TV star … great fun! 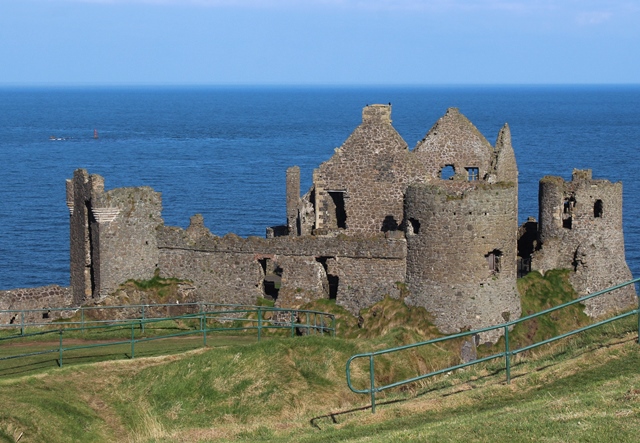 One of the most impressive sights along this impressive coastline is Dunluce Castle, a medieval ruin teetering on the edge of Antrim cliffs. There has been a castle here since the 1200s and this building is documented in 1513. The McQuillans and then MacDonnells owned it until their loss of fortune after the Battle of the Boyne. Dunluce Castle is thought to be the inspiration for Cair Paravel in C.S. Lewis’ Chronicles of Narnia. You can get a great shot of the castle and the Giant’s Causeway from Magheracross Viewpoint, and The Skerries and Portrush in the other direction. 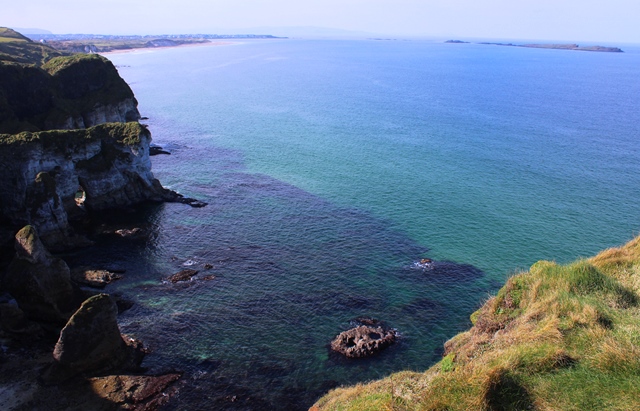 The Skerries and Portrush from Magheracross Viewpoint

I stayed in the Bay View Hotel in pretty Portballintrae, a few minutes’ drive from Dunluce Castle and Bushmills, for the weekend. Many thanks to Trevor, Laura and team for a warm welcome and lovely stay. I can highly recommend their Rathlin whiting and chips; best battered fish I’ve had in a long time! 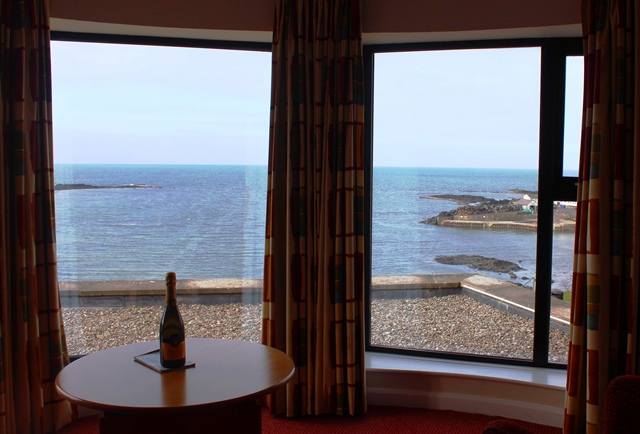 I visited Northern Ireland courtesy of Visit Causeway Coast and Glens. They provided a Hertz hire car which meant getting around the area easy and I’m very grateful for their recommendations of places to see, eat and drink. I fell in love with this beautiful area and do hope you get to visit the Causeway Coast someday soon … 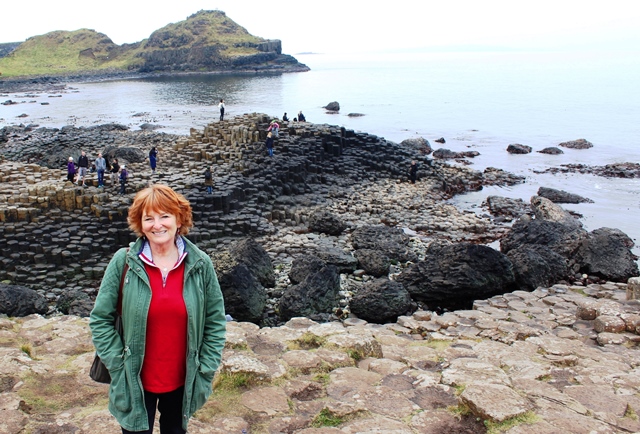 Zoe at the Giant’s Causeway

Food and Drink in Dundee - a city of delicious surprise

3 great reasons to travel with 'My Ferry Link' to France