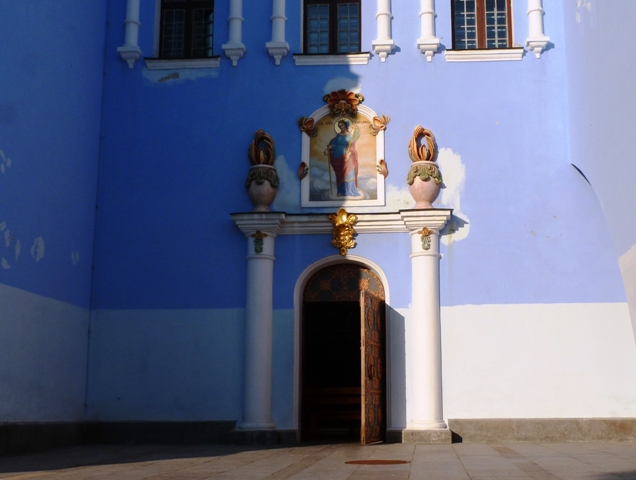 Magnetically drawn towards the sound, I discovered a timeless scene of elaborate ornament and simple reverence in the heart of Kiev.  A small group of young priests clustered together singing accompaniment to the Mass being delivered by an Orthodox priest in front of an intricately gilded icon screen.  A couple of women in headscarves and a young man dressed in a dark jumper and jeans listened with heads bowed.  To the right an old woman perched on the edge of a decorated stone shelf.  Her baggy cardigan, rumpled skirt and greying trainers had seen better days. Beside her feet a plastic shopping bag looked set to spill its contents across the marble floor.  She gazed upwards, bent her head, muttered Amen and crossed herself at regular intervals, giving the service every ounce of her attention and veneration. 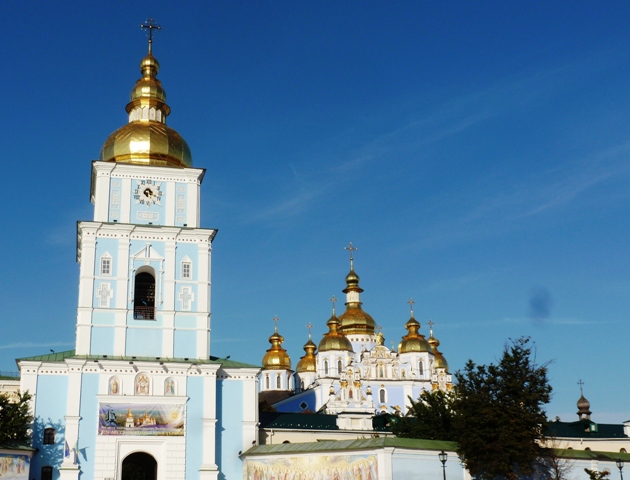 St Michael’s ‘Golden Domed’ Monastery is in the centre of Kiev, or Kyiv as the locals prefer, capital of Ukraine and a city of infinite surprises.  The monastery was perfectly rebuilt in blue and white baroque splendour after the Russians destroyed it in the 1930s.  It’s only a short walk from the marvellously mirrored, achingly modern and very luxurious Hyatt Regency Hotel, where I was staying with a group of journalists from the UK. 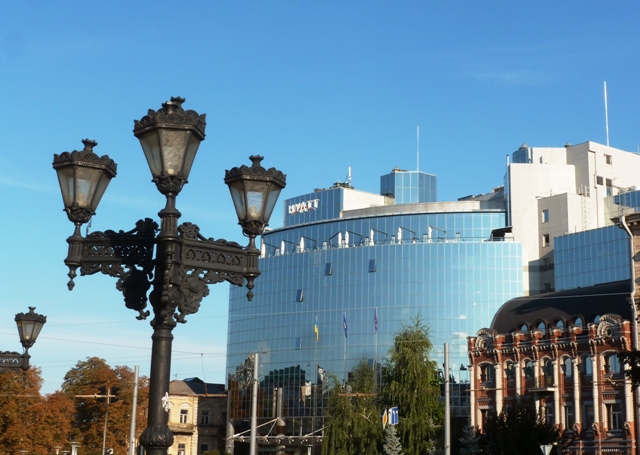 The hotel overlooks one of Kiev’s main attractions, St Sophia’s Cathedral, in front of Sofiskya Square with its imposing statue of a warrior apparently pointing out towards Russia.  The cathedral is a UNESCO World Heritage Site, dating back to the 11th century and one of Ukraine’s most significant heritage attractions. 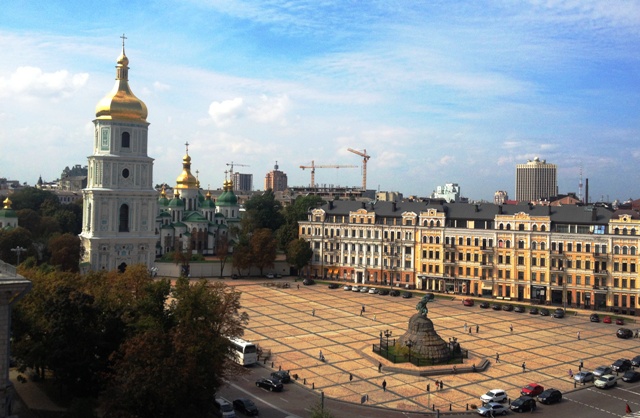 Five minutes’ walk down a road lined with colourful paintings by local artists (of great appeal if you like kittens, dogs, flowers and butterflies) is the massive white and pistachio confection of St Andrew’s Church.  From its balustrade there’s a magnificent view across the city to the wide waters of the River Dnipro. 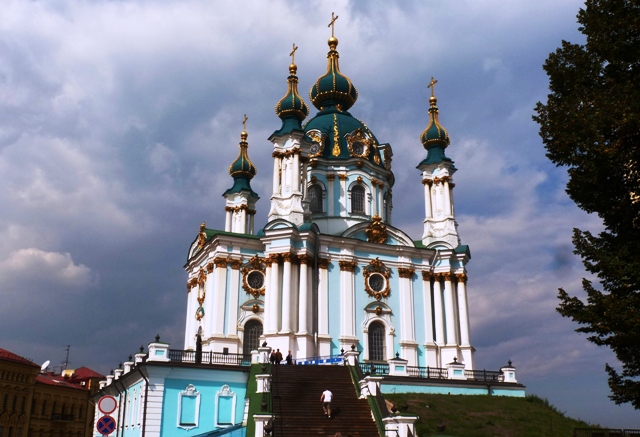 The next day we were given a dervishly spinning tour of Kiev, tantalising us with glimpses of Maidan Nezalezhnosti (Independence Square), the National Opera and Ballet Theatre, red-walled University, the turquoise Mariinsky Palace and many other imposing and colourful buildings. We stopped briefly to look at, but not go into, the most famous site in city, Kieveo-Pecherska Lavra (Kiev Monastery of the Caves) with several museums and many churches over and underground. 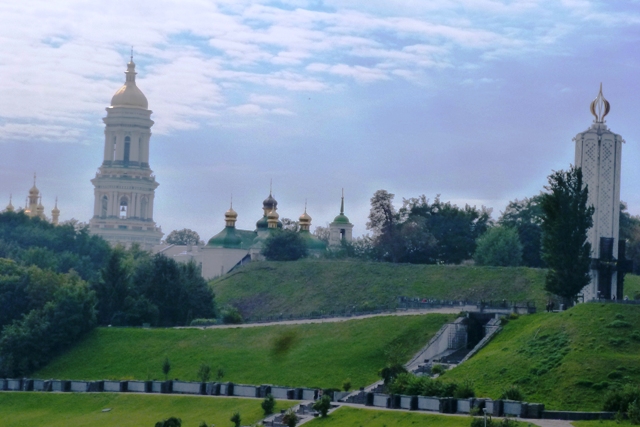 In the afternoon we went to the press conference to launch ‘Days Of Ukraine’, a three-day festival held in London in October to showcase the cultural and creative talents of Ukraine to an international audience.  It was immediately apparent what a big deal this event was to locals; the room was filled with TV crews, cameramen, journalists and a fair scattering of the ‘beautiful people'(they nearly all seem to be beautiful people in Kiev) dressed in smart outfits, chattering away in great excitement. 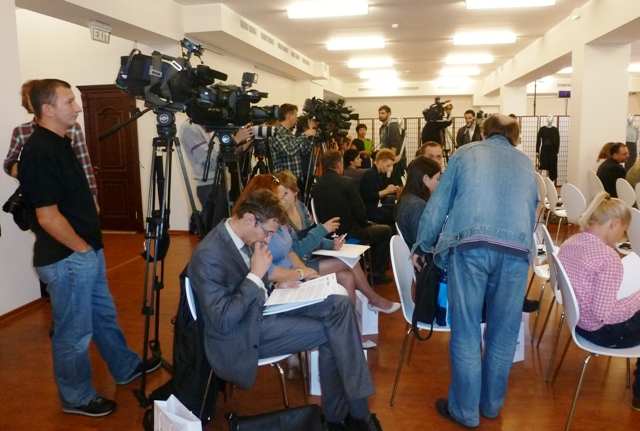 We just had time to grab a macaroon and glass of wine and cram the translation headphones on, before the dignitaries were ushered up to the platform.  Ukraine’s unique culture goes back thousands of years yet little is known of it around Europe.  There were speeches from Lord Risby, Chairman of the British Ukrainian Society and other dignitaries. They reiterated the visionary significance of this festival and also the impressive London venues they would be using. These include the Houses of Parliament, the Natural History Museum, British Library and Royal Courts of Justice.  What was difficult for us ignorant foreigners was to realise the significance of the illustrious line-up. We also heard from the ‘godmother of Ukrainian fashion’, Iryna Danylevska, adviser to the Director of Modern Art, innovative specialist Igor Abramovich and, hearts aflutter around the room, rock star, actor and uber-cool guy, Igor Skrypka. 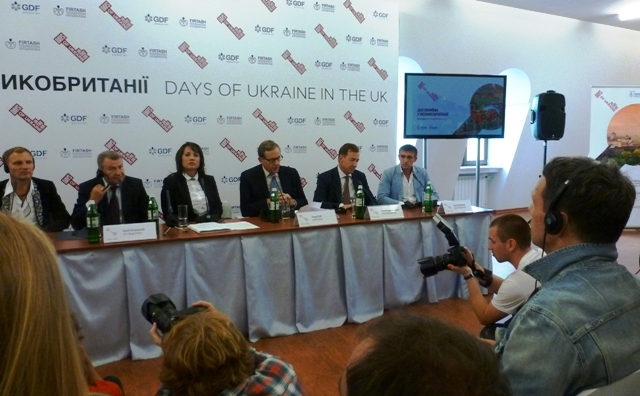 By the end of the press session we were in no doubt that the ‘Days of Ukraine’ would be a really major event bringing, to quote Oleg, ‘beetroot borsch and dumplings to London’ plus a great deal more contemporary, funky art, music and craft to shake up the UK’s preconceptions of Ukraine and establish them as a creative force majeur in Europe today. 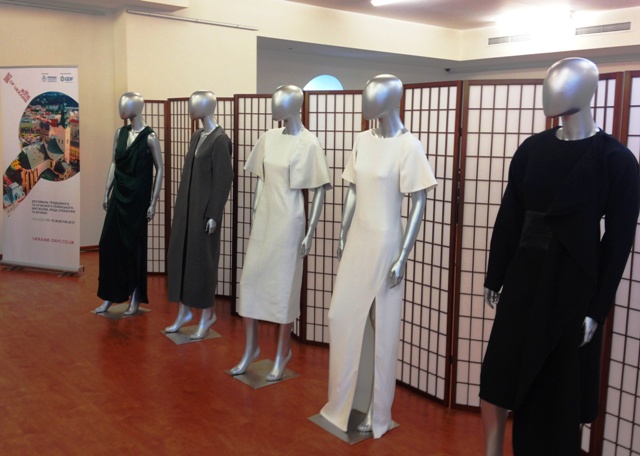 At the reception afterwards I was able to talk with fashionista Iryna who, through an interpreter, was able to explain just how important fashion is to women (and men)  today.  We’d all noticed how well-dressed everyone was and she said that Ukrainian women take pride in their clothes and want to look feminine and fashionable, enjoying the latest styles but putting their own twist to design and fabric.  This was reiterated when I spoke with Oleg.  When asked about the gorgeous jacket with detailed white stitching on the lapels, he revealed, ‘I designed this jacket myself. The pattern is adapted from 17th century embroidery and the belt is also my idea.’ Here’s the Bryan Ferry of Ukraine with a well-known artist whose name I didn’t catch … 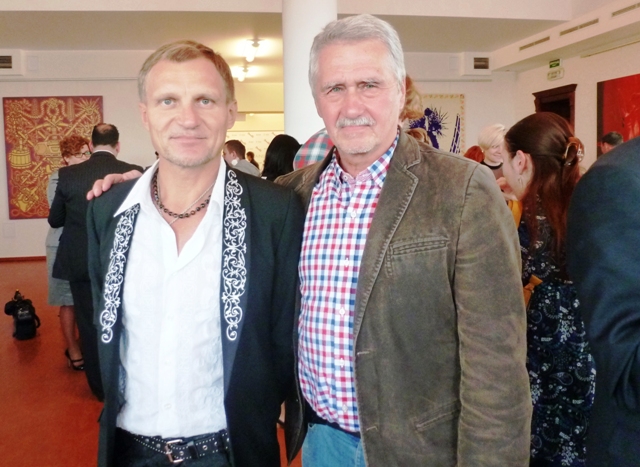 That evening we met up-and-coming fashion designer, Svetlana Bevza, in her city centre studio.  Whilst others asked knowledgeable questions about the latest styles, international models and London Fashion Week, I had a look through the racks of clothes – all clean lines, superb tailoring, muted colours and deceptively simple appearance.

Finally I got to try on some gorgeously soft leather shoes with crazily high heels and an over-size coat (very ‘on-trend’ apparently) made from the lightest, finest Italian wool. When Svetlana gently rebuked me for wanting to turn up the collar, I felt I’d got a real glimpse into this intriguing country.  They take pride in everything, want it to be perfect and have a passion to share it with others, whether it’s a coat, a restored building or the singing of a simple religious chant. 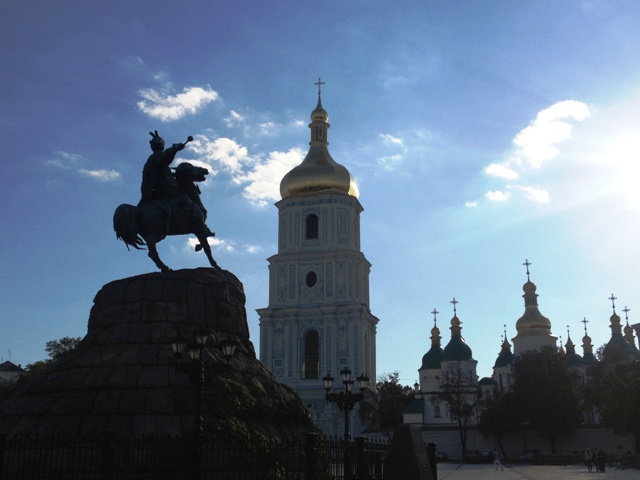 Hopefully you will visit this city one day and be as surprised and delighted as I was with a glimpse of this intriguing country and its passionate people.

January 2015: since that visit so many earth-shattering events have happened the Ukraine and the country seems to have gone backwards rather than forwards in its global progress. I sincerely hope for the sake of the genuinely warm people we met (as well as the political  manipulators) that Ukraine can flourih once more. 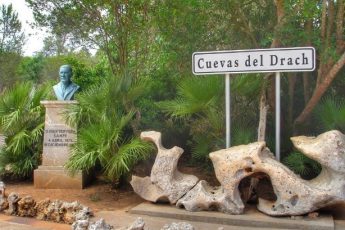 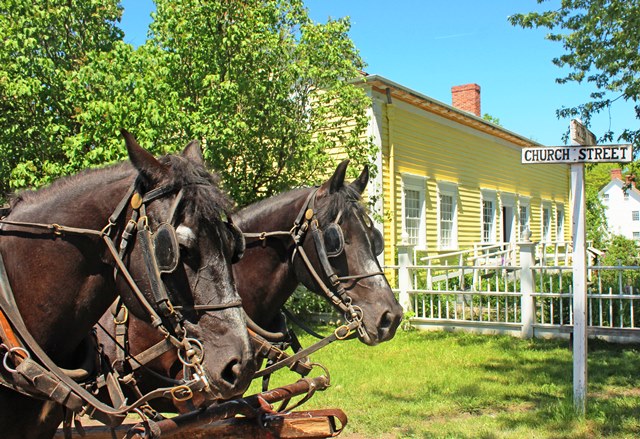 Upper Canada Village: escape to another era where life is slower and more relaxed