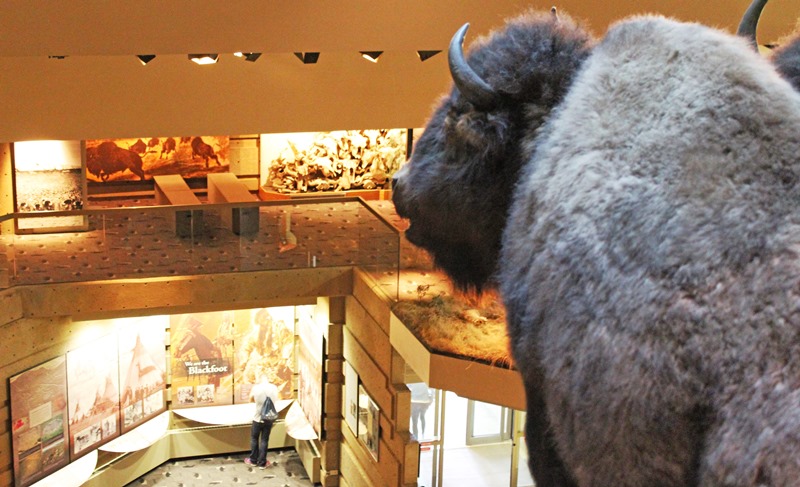 Peering over the edge of the cliff, the drop didn’t seem that impressive; difficult to imagine it piled high with buffalo carcasses … At the quirkily-named, does-what-it-says-on-the-tin Head-Smashed-In-Buffalo-Jump I was trying to picture a scene of carnage described on the information board.

The drop was originally more than 60 feet (20 metres) but over the centuries, deposits of buffalo bones accumulated so now only about 30 feet (10 meters) is visible.

Head-Smashed-In-Buffalo-Jump in Alberta is a UNESCO World Heritage Site, one of the oldest, largest and best preserved of the many buffalo jump sites across the Western Plains. I took a detour from Banff during a very memorable RV Motorhome Road trip from Vancouver to Calgary via the overpoweringly majestic Rocky Mountains.

The Interpretive Centre at Head-Smashed-In-Buffalo-Jump is one of the best I saw in Canada. In the main hall, 3 powerful buffalo stand at the edge of the cliff, gazing down onto the exhibitions.

Interactive displays on 5 floors tell the story of local Native American peoples including the Blackfoot. Napi’s People slide show demonstrates with beautiful images daily life, culture and how they lived in harmony with the world around them. “We name the months of our Calendar of moons. We call early summer ‘The Moon of Flowers‘ after the ‘Time of High Water‘. Summer is ‘Home Days’ when we move down on the prairie.”

The Buffalo Hunt is explained in detail and the film ‘Pis’kun – The Buffalo Jump’ illustrates just what went on. Before horses were introduced, the Blackfoot buffalo runners drove the buffalo from a grazing area about 2 miles west, to the drive lanes disguised as coyotes and wolves. At full gallop, the buffalo would fall from the weight of the herd pressing behind them, breaking their legs and rendering them immobile. They’d be finished off by other Blackfoot warriors armed with spears and clubs.

In the Shop I was tempted by the many souvenirs and ended up buying various keyrings, coasters and magnets for friends and family. But it was a picture by First Nation artist Maxine Noel that really caught my eye. Not Forgotten was painted ‘To honour and remember the murdered and missing Canadian Aboriginal Women and Girls’. I bought a print, which now hangs on the landing outside my bedroom.

It is a bit of a trek to find Head-Smashed-in-Buffalo site but so worth the effort. Let me know if you make it someday. Read more about my First Nation experiences here From the Canadian Desert to the Plains: Two Contrasting First Nation Sites.

I visited British Columbia as a guest of Explore Canada as part of a Travelator Media campaign, driving the RV from Vancouver to Montreal. Many thanks to fellow RVerAlison Bailey for her unfailing good humour, practical advice and excellent driving. Much gratitude to all the people we met along the way who made it such a memorable trip.

More articles with top tips on travel in Canada

Top Tips for an RV Motorhome Trip in Canada

Step back to the 18002 in Upper Canada Village, Ontario

What is cultural tourism? 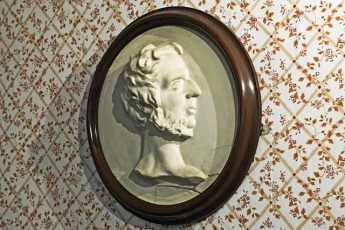