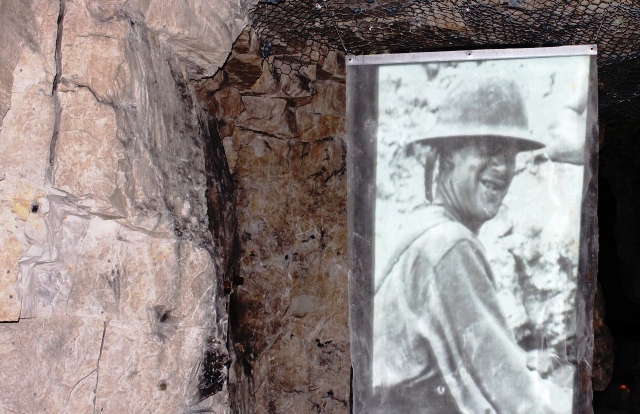 Entering the ancient quarry, at first it was almost impossible to imagine what it must have been like in April 1917, when 24,000 British soldiers prepared to emerge into the midst of enemy lines in what was to become one of most renowned surprise attacks during World War 1. Wellington Quarry (La Carrière Wellington) is housed in a contemporary museum in Arras. The Memorial Wall names the many Commonwealth troops that lost men during the Battle of Arras. A row of rather forlorn poppy wreaths rested against it, including one from Canada, a reminder of their key role in WW1.

Having had a look round the foyer exhibition of posters and an art installation of plaster sculptures vaguely reminiscent of the tortured figures at Pompeii, we given helmets and headsets and got into a lift to go 20 meters underground .

Well-lit with a circular map outlining the battlelines, listening to our guide explaining historic facts and military strategy, I had  a feeling of being on a school trip to a rather dry War Museum.  Of course, I was supposed to be moved by the enormity of it all but to be honest, I was feeling rather detached.

I was on a weekend trip to explore some of the WW1 sites in northern France. The previous day we had been walking in the footsteps of WW1 poet  Wilfred Owen from visually inspirational La Maison Forestiere through birdsong woods and fields to his grave at nearby Ors. That had been a very emotional day and I was wondering what impact this visit could have. Because that’s the thing about these war sites – there is a weird expectation that we must/will/should be moved and a strange fear that we might not be.

However, as we went deeper into Wellington Quarry the enormity of this major engineering feat and the men who achieved it, began to sink in. “From the arrival of the British in the Arras sector in March 1916, New Zealand Tunneling Companies [helped by ‘Bantams’ from the mining towns of Northern England] dug a network of tunnels in the ground underneath the Ronville and Saint-Saveur districts of Arras. They dug new tunnels and rooms and joined them up with the existing ancient tunnels and quarries or pits already under the city, quarried out hundreds of years before. The tunnels were fitted with running water and electricity supplies. Accommodation in the underground city was available for the soldiers to live and sleep in, and there was a large hospital for treating the wounded in a labyrinth of rooms with enough space to fit 700 beds and operating theatres … Signposted names and numbers were given to the tunnels and rooms underground. The New Zealanders based in this particular system named the place Wellington, after the capital city of New Zealand.”

Projected onto the uneven walls, black and white photos flickered and through our headsets we heard stories of the destruction of Arras and the occupation by British Forces, the only part of France to be under British governance during the war. Its strategic position on the Western Front, bang in the middle of warring on both sides meant 3/4 of the city was destroyed.

One photo made us all smile. Looking like the archetypal Englishman, an officer smoking a pipe is stroking a kitten. It’s a charming scene – and then you see that the kitten appears to be sitting on top of a bomb …

In the lead up to their emergence into the German battle ground, about 24,ooo men were billeted here for 8 days. What must they have been thinking during that tense time? Even playing cards, writing letters home, cleaning kit, cooking and preparing weapons can surely not have kept fear at bay. Yet the true horror of this ‘Great War’ was not fully realised at the time and they were hopefully feeling positive about victory.

An extract from a soldier’s journal was very poignant listening as was the sight of everyday objects, including tin plates and jugs alongisde a pair of big boots lying beneath a rickety looking bunk-bed. Gradually the claustrophobic atmosphere made itself felt. A plain table and cross showed where they may have prayed before the ‘push’. A wreath of poppies in honour of the Suffolk Regiment had been left by recent visitors from the UK who come here in huge numbers to learn more about this significant moment in history.

Finally we reached the shallow steps that took these soldiers out of the labyrinth. In silence we gazed up towards a blocked off wall and tried to imagine what they must have felt prior to the explosion that thrust them into midst of an enemy taken completely unawares by this ingenious attack. Impossible …

The 1917 Battle of Arras took place between 9th April and 16th May. After initial success for British troops due to the element of surprise it became a bloody disaster.  There were almost 160,000 British and about 125,000 German casualties. And it’s this knowledge that makes a visit to the Wellington Quarry such a memorable and thought-provoking experience.

The war damage has been repaired and the main squares are masterpieces of restoration. With a splendid Belfry, surrounded by Flemish Baroque townhouses with arcades of restaurants and cafes, it’s difficult to imagine that beneath the city lies a huge complex that so sensitively commemorates the brave soldiers who passed this way.