What is the value of culture today?

Abbot Hall is a slightly hidden gem, just off the main street in Kendal, an attractive Cumbrian town on the edge of the Lake District in north west England. It’s a provincial art gallery with a metropolitan vibe, a Georgian house with a contemporary ambiance and  it recently came alive to the sound of music, the flashing of light bulbs, the inking of tattoos and the smell of freshly made pizza. For one night only, Abbot Hall Art Gallery hosted ‘A Night of a Thousand Selfies’. 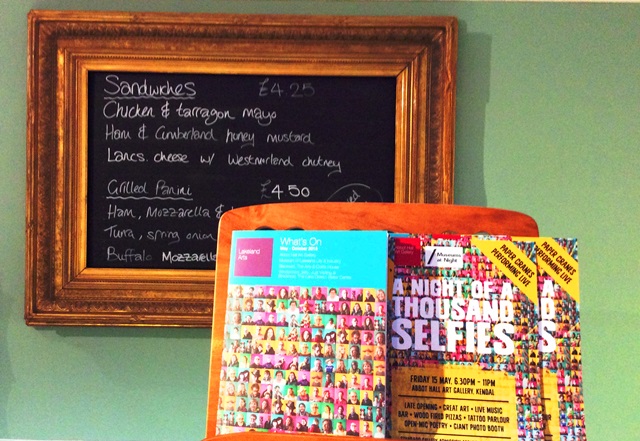 As part of the ‘Museums at Night’ events around the UK, the gallery opened its doors to visitors young and older, who experienced a diverse array of events surrounded by artworks of outstanding significance by ‘Modern Masters’ including Lucien Freud, Picasso, Tracey Emin, David Hockney, Frank Auerbach, Kurt Schwitters and Barbara Hepworth. The evening attracted a younger audience than usual and was a lively example of the value of culture today … 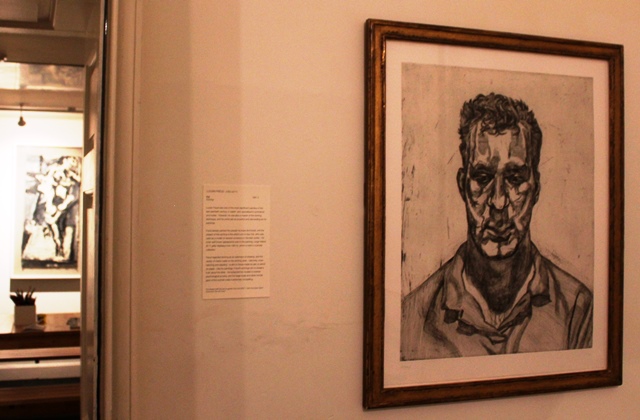 Overlooked by two rather aloof 18thc gentlemen painted by local and internationally renowned artist George Romney (1734- 1802), charming duo Paper Cranes performed their songs to a hugely appreciative audience. The juxtaposition of their contemporary folkish songs within the elegant Georgian surroundings epitomised the eclectic cultural atmosphere of that evening. Singer Beckah said, “This has to be one of our absolute favourite venues ever, so different and this room’s got great accoustics!” 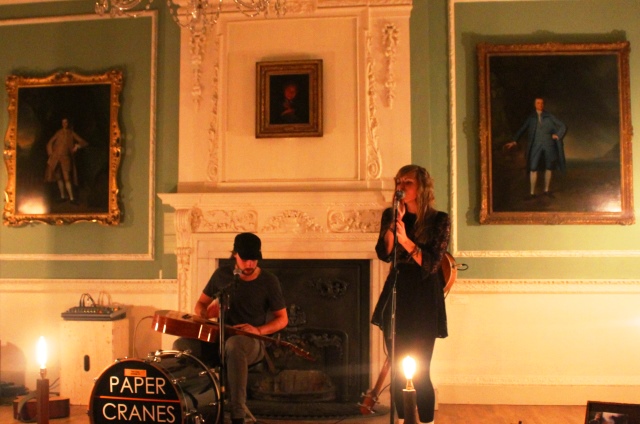 This place was a multi-cultural beehive … The Open Mic poetry readings were the surprise hit of the night. Poet and inspirational teacher Kim Moore read from her own works as did many of her group. Especially entertaining was the number of young poets whose writing combined style, substance and a healthy dose of wit and insight. 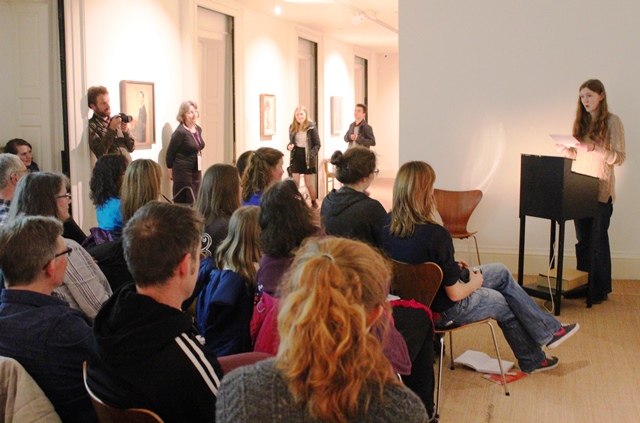 At the ‘pop-up’ Tattoo Parlour, much thought went into the choice of design – temporary maybe but still an important creative choice. Quite a few of the poets chose the quill, others drawn to a tiny skull, retro cassette tape and a tiny trio of swallows (or maybe swifts …) There was much laughter as water was daubbed, images pressed and tattoos admired. One brave lad had his placed firmly in the middle of his forehead … 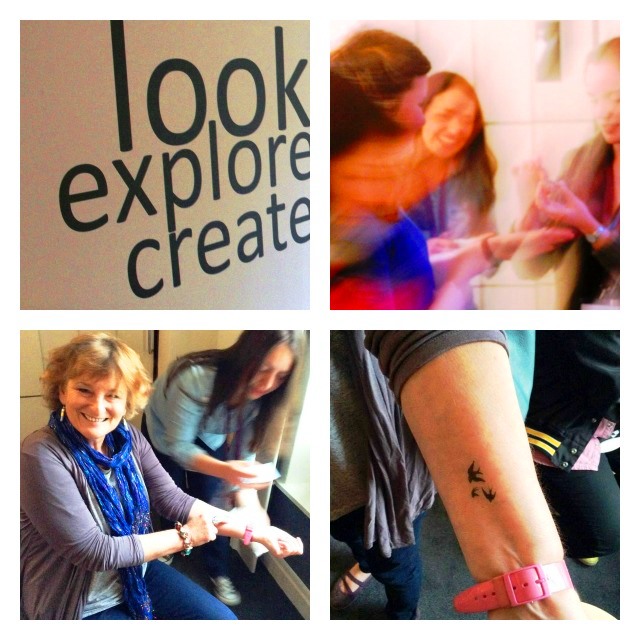 Outside in the pouring rain (so much for hopes of sitting on the lawn drinkin’ wine spo-dee-o-dee*) the cheery chaps from Pizza Principles served tasty slices of perfect pizza whilst the cafe buzzed with chatter. One visitor, whose six year old daughter and 10 year old son were rushing about in gales of laughter, was particularly pleased.“We brought our children along because it looked like a fun night. We only expected to be here for half an hour – that was three hours ago. The kids don’t want to leave!”

During the evening I held a series of informal Culture Chats, each about 10 minutes long, around these questions:

The audience was predominantly youthful with refreshing and inspiring viewpoints. Beneath a series of thought-provoking paintings by pre-eminent Portuguese artist Paula Rego, discussions were wide-ranging and illuminating. 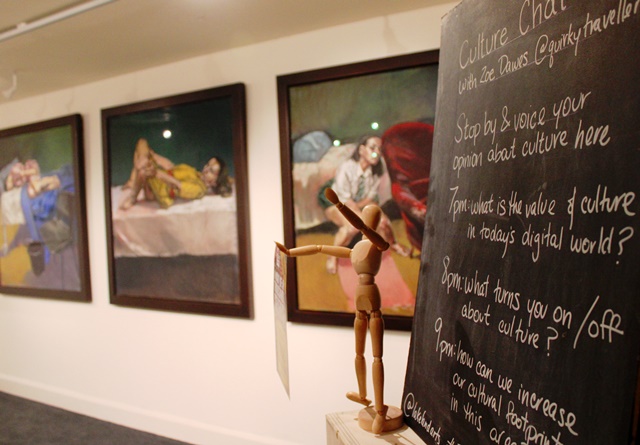 The consensus was that culture is vital in this modern world, giving people a creative outlet to express themselves and that feelings are as important as opinions. With the onward march of technology, there are many ways to be creative and share via digital platforms as well as the more traditional like books, cds, art galleries, concerts and museums. We discussed the merits of modern art (much of it excellent, some of it ‘Emperor’s New Clothes’), the importance of accessibility to newer audiences (the need for more events aimed at younger audiences, variety of tactile experiences, flexible opening times) and the necessity for sharing the message that culture is an intrinsic part of our daily lives, important to all ages, not just something for the select few.

Elsewhere in Abbot Hall a lively game of ‘Guess Who’ was going on, using a series of portraits of local people, part of the current Abbot Hall ‘Face Value’ exhibition. Having won his bout, Head of Learning, Ian Read expressed his delight at the evening’s success. “It was a bit of a gamble to try something like this, opening up in the evening, putting on all kinds of different activities and having no idea if it would work. It took lots of organisation but look around … So many people of all ages enjoying this amazing place, having fun, relaxed, happy and also appreciating the amazing art collection. It’s gone so much better than we could ever have hoped.” 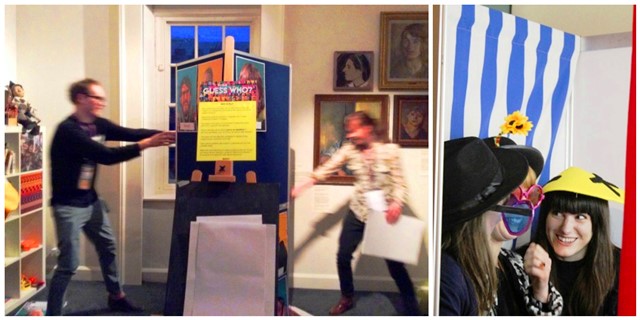 The Photo Booth downstairs (opposite one of the gallery’s most famous artworks, The Lady Anne Clifford triptych) proved extremely popular. With a dressing up box crammed full of frivolous fancies, the booth rocked with hilarity as friends crammed in tight for a visual record of their visit. From the ‘music room’ singer Kev thrummed out a few of his songs and the Colouring In table attracted budding artists throughout the night. 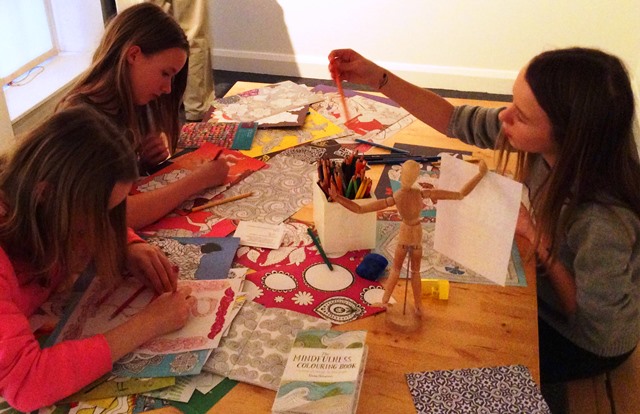 As the evening came to a close I asked people why they had come and what they thought of it. One girl said, “I saw the poster in school and thought it looked interesting. We’ve had a really good time. The band was great and I got my first tattoo. I loved the pizza – 10/10 for that!” Another added, “There’s not much for us to do at night and this was brilliant, especially as it was free for students. I really hope they do it again.” 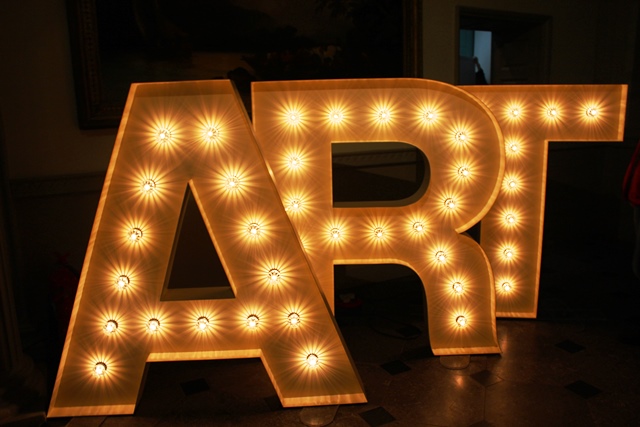 As English educator Ken Robinson put it, “You can’t just give someone a creativity injection. You have to create an environment for curiosity and a way to encourage people and get the best out of them.”  Abbot Hall creates just such an environment and proves that culture is something many of us value very highly. Find out more about Abbot Hall Art Gallery here.